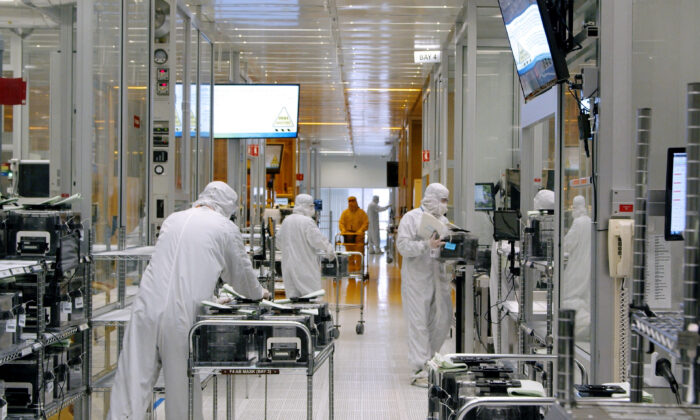 A Renaissance for ‘Made in America’?

It wasn’t long ago that Sherman, Texas, might have been best known as the birthplace of Buck Owens, the late country-and-western star, or as the home of Austin College, one of the state’s oldest colleges. More recently, however, the city of nearly 44,000 people located about 65 miles north of Dallas has had something else to brag about: a growing reputation as a center of high-tech manufacturing.

In June, Taiwan-based semiconductor manufacturer GlobalWafers announced plans to build a state-of-the-art, $5 billion silicon wafer factory in Sherman, which beat competing sites in South Korea and Ohio for the facility. The plant will produce advanced, 300-millimeter wafers—which are currently manufactured in Asia—and could support as many as 1,500 jobs over time.

The GlobalWafers announcement came on the heels of Dallas-based Texas Instruments saying that it would put up as many as four new semiconductor (or chip) manufacturing plants in Sherman, potentially investing $30 billion and employing up to 3,000 people. Before selecting the North Texas city, the company had considered Singapore for the facilities, which also will produce 300-millimeter wafers.

The latest developments are a far cry from previous decades in Sherman, when factories there making surgical dressings and automotive glass products were shuttered, with some of the jobs going to other countries.

“We’ve suffered our ups and down,” Sherman Mayor David Plyler said. “But as the economy changed and we started telling our story, things turned. Now folks want to be here.”

Sherman’s success at luring new factories underscores how some cities and towns across the country are enjoying a manufacturing renaissance. That renaissance comes after the United States spent decades shipping manufacturing jobs overseas—mainly to lower-cost suppliers in East Asia, especially China. In 1990, the United States made 37 percent of the world’s computer chips, a figure that since has fallen to about 12 percent. Now, however, some of the manufacturing is coming back, promising communities new jobs and new life.

The return of manufacturing to the United States, known as “reshoring,” got a kick-start in about 2010. But it took on new urgency after COVID-19 lockdowns revealed vulnerabilities in global supply chains. Shipping costs soared and ports were logjammed, resulting in shortages of products ranging from masks and toilet paper to computer chips, which are critical components in everything from smartphones and computers to appliances and automobiles.

“You’ve got by far the most momentum we’ve had at any time in the 12 years we’ve been tracking it,” said Harry Moser, founder and president of the Reshoring Initiative, a nonprofit that promotes the “return-manufacturing-home” message. “Where I’ve had to go to companies in the past and sort of hustle them, now I get more calls from companies saying, ‘I’ve been told we have to get our work out of China and find a source in the U.S. Can you help me find a source?’”

While other kinds of manufacturing are experiencing a U.S. revival as well—there are plans for more than a dozen new electric vehicle battery factories in the South and Midwest, for example—semiconductor plants have taken center stage lately, in part because of the $280 billion CHIPS and Science Act.

The bipartisan measure, which passed the House and Senate last week and was headed to President Joe Biden’s desk, provides $52 billion in federal subsidies for domestic chipmaking. Both GlobalWafers and California-based Intel, which plans to build two big semiconductor plants in Licking County, Ohio, had stated that the projects in Sherman and Ohio might not have proceeded as planned unless the legislation was successful. The Biden administration pushed the measure partly on national security grounds, citing U.S. reliance on China for “mature” chips, as well as China’s threats against the island of Taiwan, which the United States has depended on for the most advanced chips.

It’s also been about four decades since U.S. companies started “offshoring” jobs overseas. Attracted by the lower cost of labor in Latin America and Asian countries such as China, manufacturers in industries including textiles, steel, and electronics decided to relocate some of their operations there, ostensibly to stay competitive by paring production costs. By 2011, however, an analysis by the Boston Consulting Group was questioning this strategy. The influential consulting firm stated that China’s labor-cost advantage was quickly eroding and predicted that, by 2015, “manufacturing in some parts of the U.S. will be just as economical as manufacturing in China.”

Companies such as Caterpillar and General Electric got the message. Over the past 12 years, the rate of offshoring has declined, while the rate of “reshoring plus foreign direct investment (FDI)” in the United States has been accelerating, Moser said. Combined, the latter two categories were responsible for a record 261,000 manufacturing job announcements last year, up from 6,000 in 2010, he said. That brought the total number of jobs announced because of reshoring and FDI since 2010 to more than 1.3 million.

Most of the jobs came back from Asia. Eliminating the trade deficit by making in the United States what’s currently being imported would result over time in a 40 percent increase in domestic manufacturing, generating 5 million more manufacturing jobs, he said.

The best candidates for reshoring include companies in those manufacturing sectors with high freight costs, volatile demand, frequent design changes, and processes that can be automated, Moser said. Among them are machinery, transportation equipment, appliances, electric batteries, semiconductors, personal protection equipment, pharmaceuticals, and rare earth materials. To help companies better understand the benefits of reshoring, his nonprofit has developed something called a “Total Cost of Ownership Estimator” (TCO). The TCO is a free online tool that calculates the “true” total cost of outsourced products, including such factors as overhead, balance sheets, corporate strategy—and risk.

Risks such as the COVID-19 pandemic and Russia’s war on Ukraine pale in comparison to the risk of China “decoupling,” which these days hangs over companies like the sword of Damocles, according to Moser.

“I tell companies, ‘Figure out what you can bring back now, and get it back here now—or if you have to, get it to Mexico,” he said. “Because if the [expletive] hits the fan and nothing is coming from China to anyone, you’re going to be one of 30,000 companies trying to find a foundry or a machine shop, and you’re not going to get it.”

Hitendra Chaturvedi, a professor of supply chain management at Arizona State University, agrees that Mexico is a good alternative location for U.S. companies exiting China. “Nearshoring” from China to Mexico—as well as to Latin America and Canada—would make supply more accessible, he said. And manufacturing in Mexico is about 20 percent cheaper than in China.

Besides considering the advantages of nearshoring, Chaturvedi suggested a more targeted approach to reshoring itself.

“We should not take a shotgun approach to this,” he said. “You don’t want low-paying sewing jobs coming back to the U.S. You want high-paying jobs. I want us to focus strategically on sectors that we want to onshore.”

For its part, Sherman attracted the two new chip facilities with incentives such as tax abatements, in Texas Instruments’ case, and a package of cash, cheap land, and other breaks for GlobalWafers. The Taiwan-based company also received a $15 million grant from the Texas Enterprise Fund, the state’s “deal-closing” fund, and is eligible for more incentives under the CHIPS Act. The CHIPS subsidies should also benefit Texas Instruments’s Sherman projects (as well as South Korea-based Samsung’s plans to build multiple semiconductor plants in the Austin area).

“We’ve taken a lot of hassles out of City Hall for developers and people who want to come in and start a business,” he said. “We walk them through the process of getting permitted, sometimes in a fast-track manner. Making that process easy goes a long way in getting some of these projects off the ground.”

As a result of Sherman’s success, smaller towns around the city are preparing to accommodate the Texas Instruments and GlobalWafers workers with new housing, and industrial facilities for high-tech suppliers and vendors “are really hopping” in the region, the Dallas Business Journal reported.