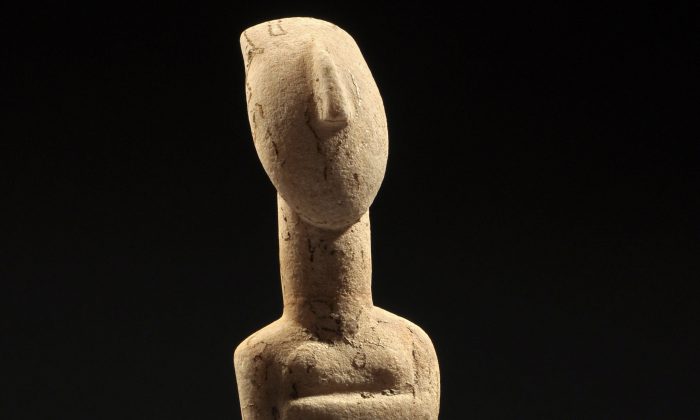 A detail from an elegant stylized nude figure of the early Spedos type, her arms are folded beneath her breasts, her slender lyre-shaped head with wedge-shaped nose and long oval neck; incised details, with traces of red pigment and strong root marks. Early Bronze Age II, ca. 2600-2500 BC. H. 9 11/16 in. (24.6 cm.) (Royal-Athena Galleries)
Art Speaks

The Cyclades is a group of thirty small Greek islands and numerous islets in the middle of the Aegean Sea. The Cycladic culture was once active here between 3300 and 2000 B.C.; what little we know about this society comes in large part from the art they left behind.

The abundance of good-quality white marble on the islands encouraged its wide use in the creation of functional objects as well as human figurines.

Cycladic sculpture reveals a particular interest in the female body in the creation of iconic idols found mostly at grave sites. Indeed, the vast majority of Cycladic figures are female.

The Cycladic culture was preliterate so there is no writing or texts to illustrate the use of these figures. Some archaeologists believe that the idols express supplication or prayer because their faces look upward. Perhaps the figures are an idealized portrayal of a “Mother Goddess,” a symbol of fertility and rejuvenation.

Among the existing examples of Cycladic sculpture, only five percent depict men. Most of these are engaged in special activities like playing a harp. In a preliterate society, according to the Getty Museum, musicians played an important role not only as entertainers but also as storytellers who kept alive the oral traditions, myths, and folklore through songs.

The Cycladic figurines are unlike any art produced by the cultures of their time. The statues are restrained in expression and refined in execution. Their simplistic lines vividly tell the story behind the figure, whether sitting or standing. Typically the figures are frontal in stance and geometric in style with the arms folded above the belly. They are designed to be viewed frontally only and not from the sides.

Because most of them have feet pointed downward, they may be designed to lay flat rather than stand vertically.  Probably, however, the most striking characteristic of Cycladic sculpture is its spare, two-dimensional nature so evocative to the modern aesthetic and yet it forms almost the entire output of this ultimately unknowable culture that thrived in the Aegean for a thousand years.

Jerome M. Eisenberg, Ph.D., the co-founder in 1942 and the director of Royal-Athena Galleries, New York, has specialized in ancient art for some 58 years.  He has lectured at NYU and abroad, and presented a number of papers at international congresses.