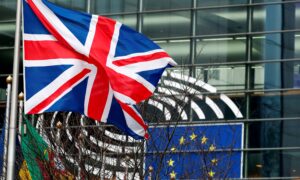 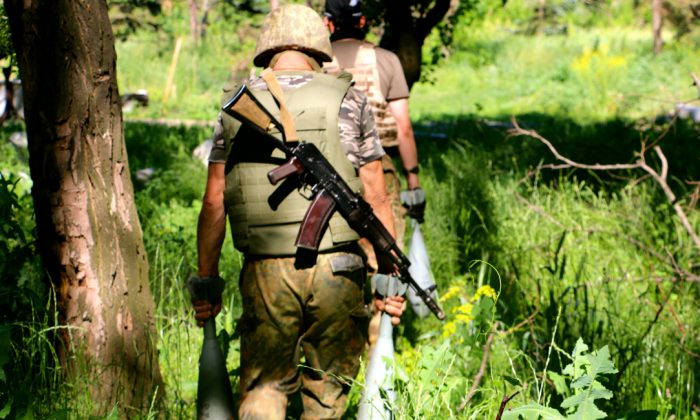 Almost as many Ukrainian soldiers have been killed in two years of fighting as American troops died in combat in Afghanistan over 14 years. (Nolan Peterson/The Daily Signal)
Europe

KYIV, Ukraine—The 2-year-old Ukraine war has hit a grim milestone amid the longest and most durable lull in fighting since the conflict began.

Ukrainian President Petro Poroshenko on Jan. 29 said 2,269 Ukrainian soldiers have died since the conflict in eastern Ukraine began in spring 2014.

That toll almost matches the 2,381 American troops killed during roughly 14 years of combat operations in Afghanistan.

Ukraine’s killed-in-action rate in such a short amount of time shows how serious the situation is in the country.
— Luke Coffey, director, Douglas and Sarah Allison Center for Foreign Policy

“Ukraine’s KIA [killed-in-action] rate in such a short amount of time shows how serious the situation is in the country,” Luke Coffey, director of the Douglas and Sarah Allison Center for Foreign Policy at The Heritage Foundation and a U.S. Army veteran, said.

“There is a real war going on and most in the U.S. haven’t got a clue,” Coffey told The Daily Signal.

Ukrainian combat deaths also exceed the rate of U.S. losses during the worst years of the Iraq war. Since 2003, 4,459 U.S. troops have died in combat operations in Iraq, with the majority of those deaths (3,908) occurring during a five-year period from 2003 to 2007.

The deadliest year was 2007, during which 904 U.S. troops died in Iraq—a total lower than the yearly average of 1,135 Ukrainian soldiers killed in combat since 2014.

The Ukraine war has seen two official cease-fires and a renewed truce that went into effect in September, all of which have failed to fully quell the violence.

The most recent cease-fire, called Minsk II, was signed in February 2015 but collapsed days later when combined Russian-separatist forces sacked the village of Debaltseve, then Ukrainian controlled, in a massive artillery attack.

In September, both sides to the conflict renewed their commitment to the Minsk II terms, but fighting never completely stopped. Cease-fire “violations” occur daily.

One has to say that unfortunately we still don’t have a sustainable cease-fire.
— Angela Merkel, chancellor, Germany

“One has to say that unfortunately we still don’t have a sustainable cease-fire, which is naturally a prerequisite for the implementation of different points in the Minsk agreement,” German Chancellor Angela Merkel said before a Feb. 1 meeting with Poroshenko in Berlin, according to The Wall Street Journal.

The Donbas region remains in a state of militarized limbo and is a virtual tinderbox ready to reignite at a moment’s notice.

Dozens of villages ravaged by the fighting are in ruins and abandoned. About 1.7 million Ukrainians remain refugees in their own country. They are internally displaced persons, in U.N. parlance.

Coffey said it is in the Kremlin’s interest to let the Ukraine war fizzle, but not completely extinguish: “I would say it’s a combination of a few things: Moscow’s focus in Syria, the drop in oil prices, the winter, and the fact that the status quo is a victory for Russia and a defeat for Ukraine. Therefore, Russia doesn’t really need to support major combat operations right now. As long as Ukraine doesn’t control all of its territory the onus is on Kyiv to act—not Russia.”

With snipers and artillery working every day, the potential for an unanticipated, or unintended, escalation by either side remains high.

The Organization for Security and Cooperation in Europe (OSCE), the multinational group charged with monitoring the Ukraine cease-fire, reported on Feb. 1 a “sharp increase” in cease-fire violations over the weekend (Jan. 30–31).

The war simply oscillates between being not quite as bad as people feared and never completely waning under the cease-fires.

At the height of the war in summer 2014, officials in Kyiv, Ukraine’s capital, issued instructions on how to use the metro subway system as a bomb shelter in case of a Russian attack on the city. Across Kyiv, spray-painted signs on the sides of buildings told where the nearest bomb shelters were located.

Yet, the war never expanded out of the Donbas. And while the opposing camps have jockeyed for territory during the past two years, the front lines have stayed largely fixed since about September 2014.

The combined Russian-separatist attack on Debaltseve last February was the latest significant change of territory in the Ukraine war.

Since Debaltseve, the war has been static, fought largely from trenches and from military camps based in ruined villages along the front lines. It is a distance war, where most casualties come from artillery or sniper pot shots. Land mines are a constant threat.

The United States and the European Union recently have increased pressure on Moscow to enforce the terms of the Minsk II cease-fire.

According to U.S. and Ukrainian reports, Russia has continued to ship surplus Soviet military equipment and armaments into the separatist territories. The Ukrainian military says combined Russian-separatist forces now command 450 tanks—more than Germany, France, and the United Kingdom.

“The separatist territories now have one of the best militaries in Europe; they only lack airpower,” said Mykhailo Samus, deputy director of the Center for Army, Conversion and Disarmament Studies, a Ukrainian think tank.

The separatist territories now have one of the best militaries in Europe; they only lack airpower.
— Mykhailo Samus, deputy director, Center for Army, Conversion and Disarmament Studies

While Kyiv’s attention has refocused lately on the domestic fight against corruption and for political reforms, the conflict in eastern Ukraine looms over the entire country.

Some analysts contend the Kremlin’s continued support for the separatist territories telegraphs an intent to keep the conflict in eastern Ukraine “frozen,” both as political leverage over Kyiv and a way to prevent Ukraine from joining NATO.

“Among other things, Putin sees the war in Ukraine as a way to stall political reforms in Kyiv,” Coffey said.

Among other things, Putin sees the war in Ukraine as a way to stall political reforms in Kyiv.
— Luke Coffey, director, Douglas and Sarah Allison Center for Foreign Policy

He added: “Trying to reform your political system and economy while fighting a war inside your borders is a bit like trying to build a ship while you are already out at sea. However, at the end of the day, Russia’s goals in Ukraine are geopolitical and imperial. Without Ukraine, or at least considerable influence in Ukraine, Russia is only an Asian power and not a European power.”

Kyiv faces an uphill battle to live up to its half of Minsk II. A constitutional reform to decentralize power—a condition of the cease-fire that the United States and the EU support—is unpopular in Ukraine. Some lawmakers have pushed back against the move.

Opponents of the deal say it will be a capitulation to Russia and a betrayal of the military. Supporters claim the deal is prudent and necessary to end the fighting and concentrate political energy on rebuilding Ukraine’s post-revolution democracy and economy. And to forge closer ties with Europe.

“Is this war finished? Of course not,” Samus said, adding: “For now, it’s very dangerous because of the Minsk agreement. If Poroshenko tries to complete the Minsk accord conditions, it will be a conflict for him inside of Ukraine. The political situation will be unstable. He’s trying to gain time.”

Speaking before Ukraine’s parliament Jan. 24, Poroshenko defended the Minsk II truce and decentralization, underscoring the potential for the conflict to reignite if a compromise is not reached.

“The political forces who want at all costs to torpedo the Minsk agreements, block the peace process, [and] block the constitutional process must be aware of the consequences of their actions,” the Ukrainian president said.

“They will cause the resumption of a hot phase of the conflict, including full-blown, rather than local, as it has been so far, conflict with Russia.”