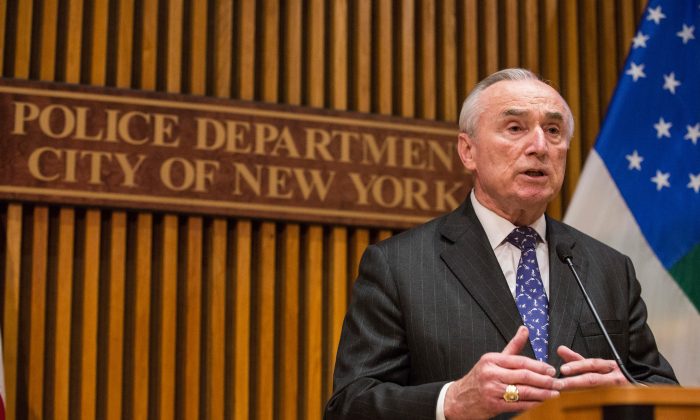 NEW YORK—Damon Jones was a 12-year-old African-American boy who learned to play football from a police officer. It was the 1980s, and the officers who patrolled his neighborhood in Westchester County also lived in his neighborhood. At the time, it was common for on-duty police officers to spend their time coaching local youth basketball and football practices.

“I didn’t see the police the way young kids see police today,” said Jones, who was inspired by his childhood models to become a police officer. “The interactions were different.”

“They were white cops. It’s not even a color issue. It’s a mindset. A culture,” said Jones, who is currently the New York State representative of Blacks in Law Enforcement of America.

Jones’s local police department had adopted a community policing strategy, which encourages officers to engage in community activities in addition to enforcing criminal laws. These officers tend to live in the communities they patrol for years at a time. Officers are given time to learn about local issues and take part in solving problems before problems lead to crime.

The idea of community policing began to spread in departments across the nation in the 1960s to ease community–police tensions during the civil rights movement.

To an extent, it worked.

But this model of community policing that Jones experienced as a child is no longer practiced in police departments today. It whittled down as crime rose, especially in New York City. When Jones became a Westchester County Department of Corrections officer in the early ’90s, this practice was still in place. But in the last 20 years, it has completely vanished.

Six months into the initiative, residents have responded to the pilot plan with mixed feelings.

Since this policing model has historically made a positive impact on community–police relations, President Obama’s task force on 21st-century policing recommended that more departments adopt the practice in recent years.

Under this policy, police officers spend less time responding to 911 calls and more time getting to know residents. Additional officers are hired to focus purely on 911 calls.

NYPD Commissioner William Bratton brought community policing back to select neighborhoods in the city in May. But he did not bring it back in its entirety.

NYPD launched a pilot community policing program in May that assigned police officers to neighborhoods in Inwood, Washington Heights, and Rockaway. They spend only a third of their time responding to 911 calls, and they look after the same neighborhood over an extended period of time. (An additional 1,300 officers were hired so NYPD would still have enough resources to respond to 911 calls.) But these officers don’t live in the neighborhoods that they patrol, like they used to.

Six months into the initiative, residents have responded to the pilot plan with mixed feelings. People have called the policy at best minimally impactful, and at worst, an excuse for NYPD to hire more officers.

An Attempt for Reform

NYPD has high hopes for the community policing program, expecting it to be replicated in precincts throughout the city eventually.

“This pilot project is really going to change the pace of policing. Right now, we don’t give officers time to work on community relations,” NYPD Chief of Department James O’Neill said in February at a police relations forum in Washington Heights, where they announced the plan to resume community policing in select areas.

O’Neill added that NYPD has worked on making fundamental changes in its training, such as teaching their officers to not go into minority neighborhoods with dangerous notions.

“You take 20, 30, 50 cops and you put them in a precinct. Then the first thing you tell them is that it’s a high-crime precinct. What’s going to go through their heads?” O’Neill said. “Fear goes 100 miles an hour. But we don’t want that.”

But months into the program, some residents at the pilot locations still see officers as untrustworthy outsiders.

In Rockaway, one of the neighborhoods where community policing was recently restored, locals feel that officers do not go into their neighborhood with the intention of solving problems.

“I’m still hearing stories from young people in our community who are receiving summons for the most minor things,” said Milan Taylor, founder of the neighborhood group Rockaway Youth Task Force.

He recalled a recent incident where a teenage girl walked through a closed park after dark because it was her shortcut home. A police officer stopped her and gave her a summons.

“She was in high school. God forbid if she didn’t go to court on that date, that’s a warrant for her arrest,” Taylor said. “These are minor infractions that put our young people in the criminal system.”

Taylor said that community policing would be more effective if officers told people why they stopped or searched them.

These officers don’t live in the community. They’re just doing their hours.
— Damon Jones, Blacks in Law Enforcement of America

He said it would help if the City Council passed the Rights to Know Act, a proposed legislation that would require officers to tell those whom they stop or search the reason for doing so.

Jones, the New York State Representative of Blacks in Law Enforcement of America, said a reason why NYPD’s community policing plan isn’t working is because if officers aren’t from the communities or living in the neighborhoods that they police, they won’t ever be truly familiar with the residents.

But Taylor felt that regardless of how much effort police officers put into improving personal relations with residents, the trust cannot be built until systemic issues are addressed.

“We see no real action … to hold officers accountable for brutality. No amount of program can build trust when the officer who killed Eric Garner is still on NYPD payroll,” he said. “I definitely commend them on their effort, but there’s so much deeper work that needs to be done.”

“There are conversations on accountability and overuse of force that need to happen. Those are issues that need to be dealt with,” Gibson said. “But it doesn’t mean this program is not successful.”

She said that she has heard good responses from people, including instances where residents and officers are on a first-name basis.

In January, the community policing program will expand to two of her neighborhoods in the Bronx, in precincts 44 and 40. She believes it’s what her community needs.

“When there’s community engagement in places where people don’t normally see police officers, that’s when relationships start to build,” she said. “It’s going to take time, we’re not even in the first year yet.”

Correction: Damon Jones was a Westchester County Department of Corrections officer. An earlier version of this article misstated that fact. Epoch Times regrets the error.