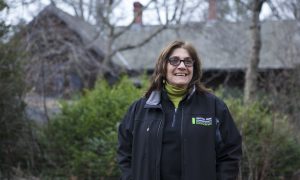 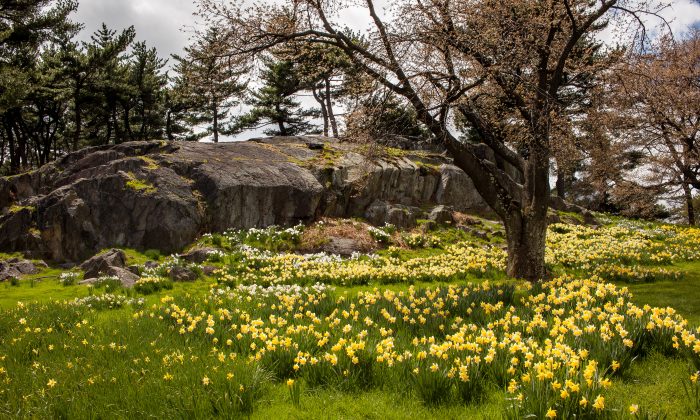 NEW YORK— It just so happened that Nathaniel Lord Britton, a taxonomist, visited the Royal Botanic Gardens in London during his honeymoon in 1888, and thought New York should have one too. So he founded the New York Botanical Garden in the Bronx, where the 250-acre space is now ensconced between blocks of fast food restaurants and tenement housing.

In some ways, the 124-year-old garden is like a Narnia’s closet that can whisk one away from the urban daily grind. Upon stepping past the gates, one leaves behind a city of rats and angry drivers, and enters New York’s alternate universe: bucolic lawns, and century-old magnolia trees that spread across the pathway, like a pink and white ambrosial blanket.

It’s been a compressed spring, which means that all the spring flowers, for the most part, will blossom at once, creating a lovely medley of blooms that one wouldn’t ordinarily see: daffodils together with snowdrops and tulips.

On the peak of Daffodil Hill, there are glorious rocks that make one feel as if one is standing in a mountain vista rather than a garden.

Some of the heirloom daffodils’ bulbs have remained there since the early 1900’s; today, the area is a focal point where nature’s past meets its future, a place where nature, art, and science interdepend on one another.

Gardening gives you a chance to connect to something bigger than you will ever be.
— Kristin Schleiter, senior curator, New York Botanical Garden

After walking past the magnolias, one will come across a laboratory, where postdoctoral researchers, graduate students, and visiting scientists gather to document every plant and fungal species on Earth.

They have a DNA bank of frozen plant tissues. There’s a program that concentrates on plant molecular research, adding to the global scientific effort to assemble the evolutionary tree of all plants on Earth, past and present.

The garden collaborates with the National Cancer Institute to discover new compounds for potential pharmaceutical use.

Their research, in essence, is done to ensure the future of life on earth.

“This is a critical objective in a world that is increasingly under environmental pressure, and whose future depends on momentous decisions based on rigorous scientific research,” the Garden’s website states.

A Museum of Plants

On a basic level, the garden is a live museum of plants. All the plants are meticulously labeled—from sweetgums to crabapples to peonies.

The garden also has a rich variety of trees. There’s trees from Asia and trees from South Africa, and trees that belong in Dr. Seuss books, like the weeping giant sequoia.

The forest is thousands of years old, filled with Native American hunting trails, and marks produced by ancient glaciers.

Snible’s favorite part of the garden is the forest. The forest is thousands of years old, filled with Native American hunting trails, and marks produced by ancient glaciers. The ecological significance of the forest was one of the reasons the founders selected the site in 1895.

What is more, the garden inquires into the role of nature in cultures and human progress.

Dry, pointy cacti are currently growing in its greenhouse in preparation for the Frida Kahlo exhibition from May 16 to Nov. 1.

The exhibition examines the beauty of Kahlo’s natural world, for plant imagery played a significant role in her art.

The showing will display more than a dozen of Kahlo’s original artworks, as well as recreate parts of her and Diego Rivera’s iconic garden and studio, with its cacti fence and deep blue walls.

“You combine plants with art and culture to create a truly artful experience,” said Kristin Schleiter, the garden’s senior curator.

The soft-spoken Schleiter, dressed in a maroon coat and a green collared shirt, matched the plants that surrounded her.

She was once a TV garden editor for Martha Stewart Living. Prior to that, she was doing marketing for technology companies.

She had always dabbled in gardening, and could not resist tuning her hobby into a career when the chance came.

“Gardening gives you a chance to connect to something bigger than you will ever be,” she said. “It’s a representation of hope. There will always be another spring.”

May 2–3, Native Plant Garden Wine Weekend. During this oenophile’s weekend, purchase a souvenir wine glass to join the garden for a flight of palate-pleasing local wines from New York state vintners while experts on winemaking and viticulture invite you to take part in the conversation during presentations of their crafts. As you sip your wine, enjoy snacks for purchase and live acoustic music.

May 9–10, Mother’s Day Weekend Garden Party. Treat mom to the day out that she deserves! In fact, bring the whole family for live music, games, picnicking, brunch, and more—all surrounded by the most spectacular spring landscape New York has to offer.