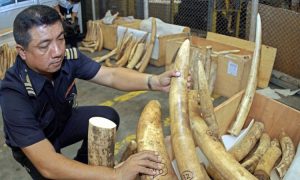 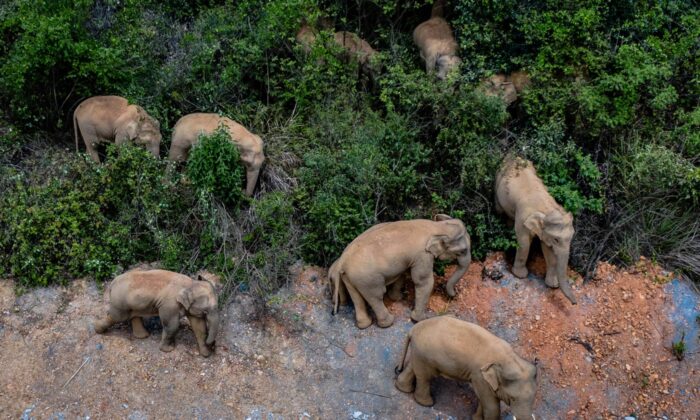 A video on May 27 recorded a herd of 15 wild elephants wandering through Yuxi city in Eshan county, Yunnan Province. Local residents were forced to leave their homes as the herd roamed through the villages and ate crops.

The herd, which has been migrating northward since April this year, comes from Mengyanzi Nature Reserve in Xishuangbanna, in the southwest corner of Yunnan, and has visited Pu’er and Honghe. On May 31, it finally arrived near Baitu village in the Hongta district of Yuxi city, 31 miles from Jinning district in Kunming. They have journeyed northward almost 310 miles.

The Yunnan Provincial Forestry Bureau said that obstacles and food supplies were placed on the elephants’ path in order to lure them toward less populated areas and prevent them from moving north and causing greater fear to citizens and damage.

According to Jinshuo Zhang, deputy director of the Chinese National Museum of Zoology, by looking at the physical appearance of the leader of the herd—a young female elephant—she probably doesn’t have experience in migration because she doesn’t seem to know where is the best place for elephants to settle, hence they are continuously moving north.

Mingyong Chen, head of the Asian Elephant Research Center at Yunnan University in China, said that it is the first time in China that Asian elephants migrated for such a remarkable distance. “This northward migration of the herd is an anomaly.”

An interesting incident happened during the journey in Daweidu village in Eshan, Yuxi—a young elephant consumed around 220 pounds of distillers’ grains and lees and passed out near a reservoir. The little drunkard was left behind by the group, but with the help of villagers, it has finally caught up.

Apart from this herd of 15 elephants, another slightly bigger herd of 17 went southward and arrived at the Xishuangbanna Tropical Botanical Garden in Menglun town, Mengla county on May 23. The herd settled there while turning the botanical garden into a buffet. They had been traveling since the end of last year. It is also the first herd of wild elephants found at this reserve in 41 years.