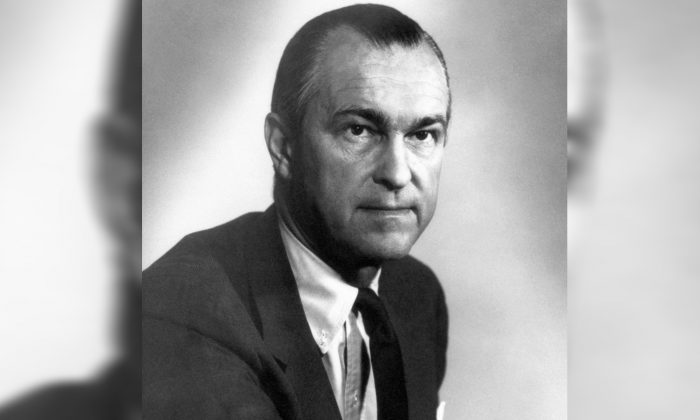 Undated picture of Richard M. Helms. Helms, 89, the quintessential intelligence and espionage officer who joined the Central Intelligence Agency (CIA) at its founding in 1947 and rose through the rands to led it for more than six years, died 22 October 2002 in Washington, D.C. AFP/AFP/Getty Images
Viewpoints

I wouldn’t call it an out-of-body experience exactly, but I did get a thrill in reading the autobiography of former CIA Director Richard Helms, “A Look Over My Shoulder.”

It served as strong validation of the line of research I followed to write my new book, “The Red Thread: A Search for Ideological Drivers Inside the Anti-Trump Conspiracy.”

Helms, who led the CIA between 1966 and 1973, was recounting a post-retirement luncheon he had with a World War II buddy from the Office of Strategic Services (OSS), the precursor to the CIA. It was the day before Helms was to meet with the CIA’s counterintelligence staff, and his old friend told him: “Remind them that no intelligence agency can for very long be any better than its counterintelligence component. And recommend that they chisel the words into the granite entrance out there.”

Helms continued: “He had a point. A quick glance in the rearview mirror shows that the most notorious traitors and successful spies in this century would have been barred from sensitive government work, or exposed early in their careers, had basic counterintelligence measures been taken.”

As Helms explained them, these basic counterintelligence measures include conducting precisely the kind of research I have put together under the rubric of “red threads” to build ideological profiles of leading persons in the anti-Trump conspiracy: Nellie Ohr, Christopher Steele, John Brennan, James Comey, and others.

Certainly, in the span of Helms’s long intelligence career, the most notorious Soviet agent to have functioned under perfect cover as a leading British MI6 officer was Kim Philby. Examination of Philby’s background as a counterintelligence measure, however, as Helms wrote, would have gleaned the following:

“Kim Philby, the prototype of a KGB-sponsored penetration agent, was active in communist circles while at Cambridge University, and subsequently engaged in an ostensible flirtation with Nazi sympathizers. Philby’s first wife and Austrian in-laws were Communist Party members. His close friend Guy Burgess, a brilliant if drunken tosspot, was well known as a leftist.”

Which is putting it mildly, if also quaintly.

There is so much we still don’t know, for example, about anti-Trump conspirator and Hillary Clinton operative, retired MI6 officer Christopher Steele. However, we do know that while at Cambridge University a half-century after Kim Philby, as I recount in “The Red Thread,” Steele was known as a “confirmed socialist,” “an avowedly left-wing student with CND credentials.” Another detail that fits the context of ideological profiling is that Steele would eulogize his late first wife as “always on the progressive side of an argument.”

Let’s decode this further. “CND” stands for Campaign for Nuclear Disarmament, the Marxist-infiltrated organization deemed subversive by MI5 for its links and efforts, especially in the 1970s and 1980s, to disarm Britain, force U.S. cruise missiles off British bases, and decouple Europe generally from the U.S.-led NATO alliance—at the time, the primary goals of Soviet foreign policy and its aggressive “nuclear freeze” and “peace movement” disinformation campaign.

Further, as president of the Cambridge Union in 1986, Steele extended the debating society’s first invitation ever to a member of the Palestine Liberation Organization, at the time still regarded as a terrorist organization by the United States and Israel, not to mention one of the Soviet Union’s proxy terror-armies against the West.

Despite these and other indicators of strong left-wing and even pro-Soviet beliefs, British intelligence hired Steele following graduation from Cambridge and dispatched him to Soviet-era Moscow. While this should make us doubt the sanity (or the agendas) of Steele’s unknown patrons inside MI6, it seems safe to say that Helms, at least, would not have considered it the height of good counterintelligence to hire such a person for “sensitive government work” in the first place.

In Helms’s experience, such counterintelligence failures (sabotage) of British and U.S. intelligence didn’t become apparent until after World War II.

He wrote: “It was in Washington when we were putting our postwar house in order that we fully grasped the fact that throughout the war, the intelligence services of our co-belligerent, the USSR, had actually intensified espionage against the United States.”

Aha! I came to this same conclusion in the research and writing of “American Betrayal.”

Helms continued: “Although OSS avoided Communist Party members, a few slipped through the security barricade. By war’s end, the KGB and GRU had established a baker’s dozen agents and a fistful of enthusiastic contacts in the OSS Washington office.”

Baker’s dozen? Fistful of contacts? There’s a weirdly glassy equanimity in Helms’s presentation of high treason; nonetheless, the facts are clear. U.S. intelligence was penetrated by communist agents from its very beginnings.

One of those penetration agents was Duncan Lee, who, as the top assistant of OSS chief William K. “Wild Bill” Donovan, was “viewed from the NKVD,” Helms noted, as “the best-placed agent.”

Helms didn’t highlight Lee’s “red threads,” but even a fairly simple background check into Lee’s “red” past should have barred him from any sensitive government position. Like Philby—like Steele—Lee’s Oxford years as a Rhodes Scholar were marked by communist and Labor activism of the day. This included a 1938 trip to the USSR, which Lee would gush over, apparently not having noticed the mass executions of Stalin’s blood purges then underway.

In 1940, Lee’s ex-landlady walked into an FBI field office in New Haven, Connecticut, and submitted a detailed report on Mr. and Mrs. Lee’s communist activities and connections, which would be filed in the New York FBI office. To be sure, the FBI was receiving hundreds, if not thousands, of similar reports; however, given Lee’s super-sensitive post in government intelligence, one would wish for some modicum of anti-communist vigilance—then as now.

It should become apparent that this lack of vigilance over (or embrace of) “red threads” has been a feature of our intelligence services all along. This tells us there is really nothing extraordinary about anti-Trump conspirator John Brennan admitting to a CIA polygrapher that he voted for Moscow’s representative in the United States, Gus Hall, for U.S. president in the middle of the Brezhnev era, being hired by the CIA anyway, and ending his intelligence career as Director of Central Intelligence (DCI).

Helms might well have thought the CIA learned its wartime lesson. Returning to the Philby betrayal in his memoir, Helms for a second time set forth Philby’s “red” biography, beginning with that “enthusiastic Marxist … political orientation” Philby developed at Cambridge. None of it, however, came onto counterintelligence radar until it was far too late.

It was not until U.S. cryptographers began to crack a series of Soviet intelligence cables, known as the Venona cables, that Philby’s cover began to fracture. Through Venona, U.S. intelligence identified one of Philby’s British Embassy associates, Donald Maclean, as a Soviet agent in 1951. Warned by Philby, Maclean fled to Moscow with another heretofore covert Soviet agent, Guy Burgess.

Helms explained what happened next.

“This hand in hand escape prompted [counterintelligence officials William K.] Harvey, whose opinion of Philby had thoroughly eroded, and Jim Angleton to begin, independently I believe, to examine Philby’s background. Harvey forwarded a memorandum to General Bedell Smith, then DCI, analyzing Philby’s background and activity, and concluding he was undoubtedly a Soviet agent. A bit later, Jim Angleton, whose staff responsibilities included supervision of foreign liaison, came to a similar if more guarded conclusion. At General Smith’s request, Philby was recalled.”

In London, the British government allowed Philby to “politely retire.”

I was quite struck by Helms’s story because “The Red Thread” examines the backgrounds and activities of the anti-Trump conspirators. Communist and socialist beliefs are demonstrably prevalent among them. Could any of these officials in such highly sensitive areas of law enforcement and intelligence—Ohr, Comey, Brennan, Steele, and the rest—ever have passed the Helms, Harvey, and Angleton counterintelligence test? Based on my own analysis, I doubt it.

If ever we are to get the Constitution functioning again and the country back on track, I have a suggestion. Evincing the kind of revolutionary zeal that is destructive to the U.S. constitutional order should disqualify a person for tax-payer-paid sinecures, and especially in highly sensitive and all-powerful government positions.

Is that too radical a suggestion?