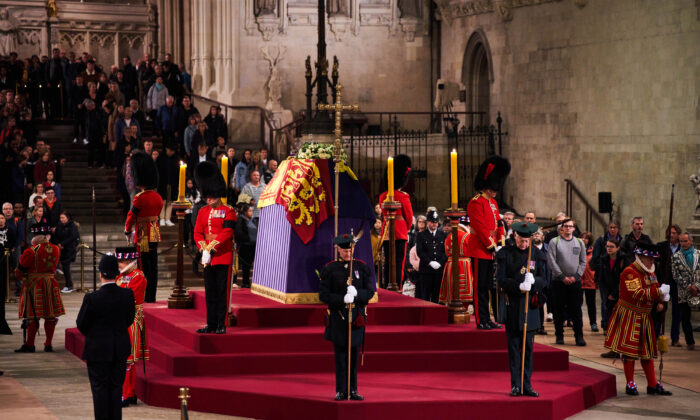 The coffin of Her Majesty Queen Elizabeth II, draped with the Royal Standard, placed on top of a catafalque at the lying-in-state in Westminster Hall in London on Sept. 18, 2022. (Courtesy of Howard Cheng)
UK

Around a quarter of a million people paid their respects in person to Queen Elizabeth II by viewing her coffin as it lay in state in London, UK Culture Secretary Michelle Donelan has revealed.

During the late monarch’s four-day lying-in-state, which ended on Sunday, around 250,000 people went through Westminster Hall to pay their last respects, Donelan told Sky News on Tuesday, adding that her department was still “crunching the numbers.”

On Monday, after the state funeral at Westminster Abbey, which was attended by dignitaries including hundreds of heads of state, tens of thousands of people turned out to watch the Queen’s funeral procession make its slow journey through the capital and on to Windsor Castle for the committal service.

The monarch, who spent 70 years on the British throne, was finally laid to rest with her husband the Duke of Edinburgh at the King George VI Memorial Chapel in Windsor during a private evening burial service attended by close family.

The royal Twitter account published a picture of the Queen taken at Balmoral in 1971, with a quote from Shakespeare’s Hamlet: “May flights of Angels sing thee to thy rest. In loving memory of Her Majesty The Queen.”

‘May flights of Angels sing thee to thy rest.’

In loving memory of Her Majesty The Queen.

Donelan paid tribute to the volunteers who helped manage and support the proceedings in recent days, especially the queue for the Queen’s lying-in-state.

Talking to “BBC Breakfast,” she called the queue “phenomenal,” praising the help of the Samaritans, the Red Cross, the police, and establishments across the South Bank that opened their doors to those queuing.

“It was a real team effort to enable people to have that moment to say goodbye and I want to pay tribute to everybody that was involved—all the volunteers, all the marshals, the stewards—it was incredible.”

Pressed on Sky News about the cost of the state funeral, Donelan said that most British people would see it as “money well spent.”

“You saw so many thousands out there and I don’t think anybody can suggest that our late monarch didn’t deserve that send-off, given the duty and the selfless service that she committed to over 70 years,” she said.

She said it would be “downright preposterous” to suggest otherwise.

“It was great sense of the community coming together. I always think of our late monarch as the glue that brought society together,” she told the broadcaster.

Asked on LBC radio if the coronation of King Charles III should be scaled down owing to the cost-of-living crisis, Donelan said that no plans have yet been made for the proceedings.

But she said the government does want to “give the nation a moment.”

“Rallying a community, bringing them together, is never a bad thing,” she added.