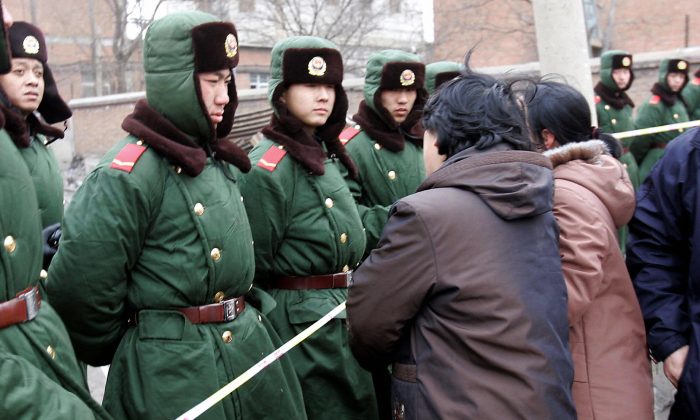 A prominent Chinese official who once oversaw China’s biggest oil-producing region was sacked recently, according to an announcement by the Communist Party’s anti-corruption agency.

Ge Ruyin (pronounced “Guh Roo-yin”), head of the People’s Congress of northeast China’s Heilongjiang Province, is the third provincial-level official from the area to be investigated.

The Central Commission for Discipline Inspection did not give any specific reason for Ge’s investigation beyond “serious violations of discipline.”

An examination of his later career—as mayor or party secretary in the cities of Daqing and Harbin since the late 1990s—shows a constant string of injustices committed against those in his charge: land stolen from disenfranchised farmers, and severe abuses perpetrated against the spiritual practice of Falun Gong.

Ge, born in 1953 in northeastern China’s Liaoning Province, is an engineer by training. In the 1990s he served as vice mayor of Shenyang, the provincial capital. In 1998 he was reassigned to Heilongjiang, where he was involved in the administration of Harbin and Daqing, before ascending to the provincial People’s Congress.

Heilongjiang, along with Liaoning and Jilin, are the three provinces that constitute Northeast China, a resource-rich industrial region of about 100 million people that borders Mongolia and Siberia.

According to Fangmin.org, a Chinese news site run by disenfranchised and frustrated citizens, Ge Ruyin, when he served as Party secretary of Harbin between 2009 and 2012, was behind widespread economic abuse of and physical attacks against local peasants. Tens of thousands of farmers have reported Ge’s suppression of those upset at the loss of their land to developers.

Locals also believe that Ge facilitated an assault by thousands of thugs armed with knives and shovels to destroy their crops in August 2011. Villagers fought the attackers, which resulted in two deaths.

The same year, peasants complained that Ge had stolen 400 million yuan (about $62 million) that was allocated to them by the Ministry of Construction as compensation for land lost to development.

Residents also implicated a Harbin judge, Wang Kelun, as being one of Ge’s accomplices.

Gao Chuancai, a farmer near Harbin, had his land seized by developers during Ge’s time in office. His wife committed suicide because of the incident, a tragedy followed up by the death of their son when Gao could not afford medical treatment. According to Fangmin, the authorities later charged Gao with murder.

Fangmin also reported that when Harbin vice mayor Nie Lingyuan, who had been reassigned from Beijing, discovered that Ge Ruyin and Harbin official Shi Zhongxin colluded to embezzle the land compensation funds, he soon lost his position.

Later, when Shi Zhongxin’s misdeeds were uncovered in early 2011, Ge interfered with the central authorities’ investigation of peasant complaints, and ordered a media blackout on news regarding Shi’s removal from office.

The city of Daqing, where Ge Ruyin served as mayor starting in 2002 and as its Communist Party secretary beginning in 2004, is famous for its nearby oil field, which is the world’s fourth most productive and by far the largest in China. It supplies about a third of the national petroleum output.

One of Xi’s primary enemies in the nationwide purge was Zhou Yongkang, who once directed the Party agency that oversees Chinese police and security forces. In 2014, he was expelled from the Party in disgrace and this June was sentenced to life in prison.

Daqing was where Zhou Yongkang began work in the oil industry during the 1960s, and he maintained a connection to it throughout his political career.

Zhou’s associates in the oil sector, where he had once worked as an executive, were the first to go. Jiang Jiemin, formerly the chairman of the China National Petroleum Corporation, was removed from his post in September 2013 and convicted on corruption charges the following year.

Executives at PetroChina, the state-run company that operates Daqing, also found themselves on the chopping block. Wang Yongchun, manager of Daqing Oilfield Co. Ltd., was placed under investigation in 2013 and sentenced to 20 years in prison this October.

Ge Ruyin, like many high- and low-ranking officials disciplined in the course of Xi Jinping’s anti-corruption campaign, was an active participant in the campaign against the Falun Gong spiritual group, which began in July 1999.

The persecution, which is estimated to have taken tens of thousands of lives, has been particularly severe in the three northeastern provinces, including Heilongjiang.

Ge, in his capacity as mayor of Daqing City, demanded the suppression of Falun Gong practitioners when he addressed a Harbin government teleconference in June 2002. Subsequent “government work reports” from 2003 and 2004 echo these directives, according to a report made by the World Organization to Investigate the Persecution of Falun Gong (WOIPFG).

Minghui.org, a Falun Gong website that provides firsthand accounts of the persecution, listed 49 instances between 2003 and 2013 in which Ge Ruyin called for police mobilization against practitioners in Harbin and Daqing.

Falun Gong, a meditative practice that focuses on spiritual cultivation according to the principles of truthfulness, compassion, and tolerance, was first taught in 1992 by Mr. Li Hongzhi in his home province of Jilin, which neighbors Heilongjiang. It became extremely popular within years, with tens of millions of Chinese practicing by 1999.

But Jiang Zemin, Communist Party head at the time, deemed Falun Gong a threat to his political power. He labeled it a “heterodox religion” and ordered a systematic campaign to root it out of Chinese society. Across China, police arrested hundreds of thousands of adherents, and deadly force was used in attempts to make them renounce their faith.

According to research by WOIPFG, 53 practitioners were confirmed killed by Daqing authorities between July 1999 and October 2005, when Ge Ruyin was in charge of the city as its Communist Party secretary (in addition to his role as mayor).

Falun Gong practitioner Wang Bin, a computer engineer at the Daqing Petroleum Institute, was murdered in front of dozens of witnesses at a labor camp. For an hour, guards beat him until they punctured an artery and he bled to death.