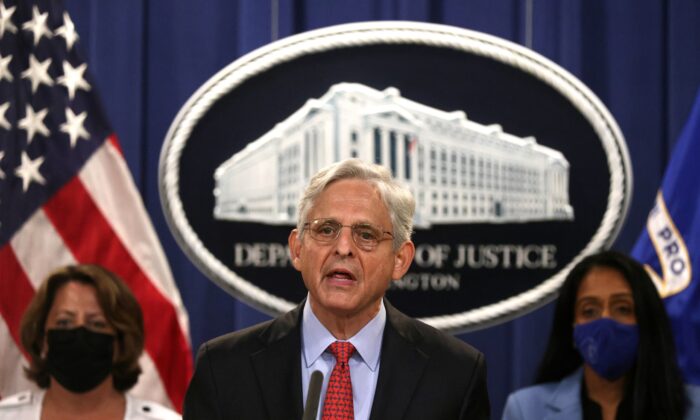 U.S. Attorney General Merrick Garland speaks during a news conference at the Department of Justice in Washington on Sept. 9, 2021. (Alex Wong/Getty Images)
Viewpoints

A Purge Is Starting With the Bill of Rights

Attorney General Merrick Garland has now repeatedly and clearly demonstrated his intention to toe the party line, as it drifts inexorably from constitutional principles and the Bill of Rights—in lieu of serving as an independent and objective enforcer of federal law.

He first exposed his partisan contempt for objective facts in a speech given on June 15. There, he stated, “In the FBI’s view, the top domestic violent extremist threat comes from racially or ethnically motivated violent extremists, specifically those who advocate for the superiority of the white race.”

Not Antifa. Not BLM.

As FBI field agents are well aware, the domestic threat posed by white supremacists was successfully dissipated in the 1980s and ’90s, largely as a result of high-risk, large-scale undercover operations targeting the Aryan Nations and other white militia organizations. Garland’s speech parroted statements made in congressional testimony by FBI Director Christopher Wray on Sept. 17, 2020, wherein much the same conclusory statements were made, unsupported by data, reflecting Democrat talking points rather than independent determinations based on articulated facts.

Garland’s and Wray’s statements have lent credibility to the newly expanded definition of white supremacy to include all those who disagree with progressive policies—the moral justification thus being created for repressive tactics directed at eliminating dissent. And—significantly—at ostracizing dissenters.

Garland now has taken another step in the politicization of the Department of Justice by categorizing parents disturbed by progressive indoctrination of their children as domestic terrorists. And the FBI, whose resources are already overtaxed—approximately 10,000 special agents to protect a nation of 330 million-plus—has been directed to investigate this imminent threat to national security.

In his Oct. 4 memorandum to the FBI director, Garland warns parents that “in the coming days, the Department [of Justice] will announce a series of measures designed to address the rise in criminal conduct directed toward school personnel.”

Missing in the memo is any clue as to the federal jurisdiction that might justify the FBI’s involvement in what appears to be in essence the suppression of opposing views—suppression of the expression of opinions that are contrary to the views propagated by individuals and institutions currently wielding the reins of power. Garland’s misuse of the government’s overwhelming power—proscribed by the First Amendment to the Bill of Rights—is barred precisely because the Framers anticipated such abuse of power, and went to great lengths to prevent it.

The assault on the Bill of Rights appears to be coordinated and nearly overwhelming in nature.

From the Sixth Amendment right to a speedy trial, denied to the Jan. 6 unarmed Capitol Hill trespassers, to the utilization of tech companies as proxies to circumvent First Amendment limitations on government action, the onslaught has many fronts.

Apple announced it would monitor and review the images maintained by millions of customers on the cellphones that it sells. Ostensibly a measure to identify pedophiles, this is realistically a first step to monitor the public at large—actions by a powerful corporation that would be clearly illegal if conducted by the government without a warrant.

The right to a fair trial by a jury of one’s peers—the Sixth Amendment—was effectively eviscerated by the Biden administration’s declaration that mounted Customs and Border Protection officers were guilty of whipping illegal Haitian immigrants prior to any formal charges being brought.

The administration’s disregard for the free speech rights of millions of federal employees is evidenced by the White House’s list of prohibited words and phrases—a list that altogether too many corporate entities are quick to incorporate into their own private sector cultures.

An assault on property rights—heretofore secured by the Fifth and 14th Amendments’ due process clauses—has utilized the back door of COVID-19 to justify regulation of small businesses, circumventing the legislative process, and severely restricting the exercise of business decisions by small entrepreneurs.

Civil rights have been curtailed by the insidious substitution of equity for equality—and by the insertion of critical race theory in lieu of the content of character theory of Martin Luther King Jr.

The constitutional right to “security of person,” guaranteed in Article Three, along with the pursuit of happiness, as articulated in the Declaration of Independence, are being subtly undermined by the defund the police movement. How can happiness be pursued in an insecure, crime-ridden environment?

Rather, the assault on law enforcement authorities has been ramped up. In the military, police, and in the Department of Homeland Security, witch hunts are underway, with the search for dissenting opinion—mislabeled as a search for white supremacist conspirators—being encouraged and pursued by the media and left-wing think tanks. And the failure to provide secure borders undermines security on a number of levels, from the entry of violent criminals to the propagation of the dreaded virus.

Diversity of opinion is being rooted out and replaced by unquestioning obedience and propagation of dogma. How can the First Amendment’s freedom of religion be pursued when church and synagogue doors are barred whenever lock-downs are declared, while the doors to taverns remain open?

Powerful political leaders on the left—House Speaker Nancy Pelosi (D-Calif.), former presidential candidate Hillary Clinton—continually question the relevance of the Constitution, while enthusiastically supporting movements such as the 1619 rewriting of American history that questions the Framers’ relevance in the modern age.

The Second Amendment right to bear arms has been under constant attack from the Democratic Party. The attempt to place David Chipman, one of its most fervent opponents as head of the Bureau of Alcohol, Tobacco, and Firearms proved beyond the pale, even for middle-of the-road supporters of firearm bans. However, individuals such as Mark and Patricia McCloskey of St. Louis, who have exercised their Second Amendment rights in the defense of their security and their property, have been ridiculed by the media and prosecuted by local authorities.

The elephant in the room regarding blatant disregard of our precious rights is, of course, COVID-19. The Biden administration, as well as state executive officers, have used the pandemic to justify the sweeping away of the right to privacy that Justice William Douglas interpreted into the Constitution, as emanating from the “penumbra of rights“ that the founding document enshrined as guarantees for future generations.

Although members of the military have historically been bound by certain limitations on their ability to communicate personal views, the imprisonment of Marine Corps Lt. Col. Stuart Scheller subsequent to his statements dissenting from disastrous decisions made by general command officers with regard to Afghanistan, is chilling indeed.

The move, in addition to being clearly intended to send a message to others in the military who might be so inclined, is additionally another step in the administration program to suppress and eliminate dissenting voices in the military and federal agencies.

To further enforce the message, Marine officials also are investigating Lance Cpl. Hunter Clark for having consented to appear at the podium with non-candidate Donald Trump at a rally on Sept. 25. Clark received national attention after rescuing an infant in the course of the chaotic evaluation at Kabul airport in Afghanistan.

What we are witnessing is a purge.

The true purpose of using vaccination mandates to fire employees from schools, civil service positions, hospitals, airlines, and law enforcement has nothing to do with COVID-19 and everything to do with disenfranchisement and diminution of our previously inalienable rights. The purpose is to weed out dissent.

It’s the next step, following and building upon the redefinition of white supremacy to include any who disagrees with the party line, anyone who dissents. Just as the labeling of angry parents as domestic terrorists is simply a subterfuge to weed out dissent.

It’s a campaign to disempower, to eliminate those with dissenting ideas, ideas that diverge from authorized, “correct” thought. Those who could pose a threat to the power elite.