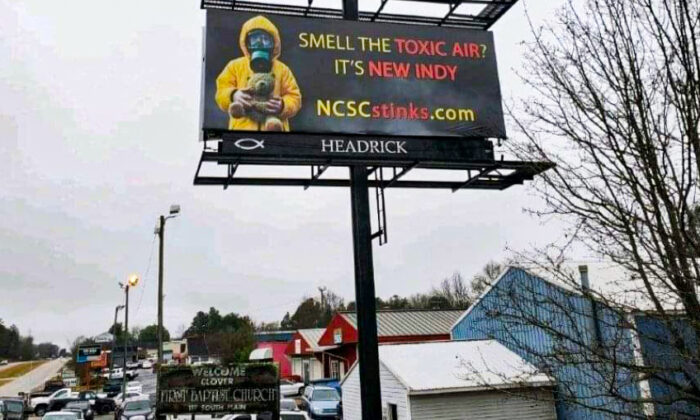 One of South Carolina’s state mottos is “Dum spiro spero,” a Latin phrase meaning “While I breathe, I hope.”

However, there are some living near the New-Indy Containerboard mill in Catawba, South Carolina, reporting difficulty breathing due to an all-pervasive noxious odor hanging over the community, allegedly caused by the plant.

On most days, when Kerri Bishop steps outside, she gets an instant headache followed by exhaustion.

“It’s the smell of dirty diapers and chemicals,” Bishop told The Epoch Times.

The smell has carried over into five counties populated by 1.5 million people in North and South Carolina, she said.

New-Indy, which is owned by Schwarz Partners, LP and The Kraft Group, bought the paper mill from Resolute Forest Products in 2018, and in 2021 the company began manufacturing cardboard products.

The Kraft Group is a paper, packaging, and forest industry company headquartered in Foxborough, Massachusetts. It’s ranked in the top 90 of America’s largest privately-owned businesses by Forbes and is the owner of the New England Patriots football team.

Hydrogen sulfide (H2s), methyl mercaptan, methanol, and other emissions from New-Indy are reported to have begun discharging into the air when the mill switched its production from white paper to cardboard products, and this is when residents near the mill said they began to smell foul odors.

Bishop suffers from trigeminal neuralgia, a nerve condition that causes debilitating, shooting pain in her face and on the right side of her head. She said it’s exacerbated by the toxins in the air. It’s also known as the “suicide disease” because the intensity of the pain can lead to suicidal thoughts and tendencies for some, though Bishop has sought treatment that has improved her condition despite the air quality.

“If I didn’t live here I could probably live a normal life,” she said, adding that she may eventually have to move.

In January 2021, the South Carolina Department of Health and Environmental Control (DHEC) began receiving complaints of “rotten egg,” “chemical” and “sewage” smells from residents living near the New-Indy paper mill.

The DHEC investigated the reports, and in April 2021, the agency released its findings showing that New-Indy was a significant source of the odors reported by residents. When the findings were released, the DHEC said it had received more than 5,000 complaints.

After receiving a corrective order in May 2021 from the DHEC, New-Indy began operating its on-site steam stripper, which Bishop said reduced the odor, but for her, it was also an acknowledgment that New-Indy knew there was a problem.

“I was actually seeing spots before they hooked that up,” she said.

Those four attorneys have since been appointed interim co-lead counsel by the court, and their co-counsel are Elrod Pope Law Firm, P.A.; Mauney PLLC; and Stavrinakis Law Firm, LLC.

According to information provided on its website based on gathered testimonies from its clients, co-lead counsel said emissions were noticed as early as November 2020.

By-products that were previously sent to an incinerator are now sent to outdoor lagoons, which allows hydrogen sulfide and other pollutants to evaporate into the air, co-lead counsel said.

The putative class-action lawsuit, which is pending before Judge Sherri Lydon in the U.S. District Court of South Carolina, seeks compensation for past and future medical problems resulting from the emissions, as well as for New-Indy to reduce contamination in its manufacturing.

According to a timeline provided by the Environmental Protection Agency (EPA), the DHEC contacted the EPA in April 2021 about the odor concerns. The EPA joined with the DHEC and the North Carolina Department of Environmental Quality and Mecklenburg County Air Quality to investigate the odor.

“This action follows numerous complaints from citizens across portions of South and North Carolina, including Mecklenburg and Union counties, and the Catawba Indian Nation,” the EPA said.

The EPA issued an emergency order in May 2021 to New-Indy to “monitor and reduce” H2S air pollution to bring it in compliance with the EPA’s Clean Air Act Section 303. The order required New-Indy to install three H2S monitors at its fence line and prohibited New-Indy from emitting H2S above health-based levels from its operations.

In that same month, the EPA entered a proposed consent decree in the U.S. District Court in which New-Indy agreed to injunctive relief designed to prevent H2S concentrations “above levels that endanger people’s health.”

In addition, New-Indy has to treat its unstripped foul condensate—the by-product of manufacturing processes—with hydrogen peroxide.

The consent decree was also subject to a 30-day comment period that ended in March 2022. Because of the amount of information, it was extended an additional 30 days, Bishop said. In the public comment, community members reported the odor to have changed from a rotten egg smell to a rotten egg smell overlaid with chemicals as a result of the hydrogen peroxide treatment.

Bishop, who said she has 18 years of experience in manufacturing, said the $1.1 million fine from the EPA could have gone to purchase an additional steam stripper that she said would have provided a short-term fix while New-Indy addressed the more long-term issues.

“That is approximately 48 cents per person in the affected area,” Bishop said. “It’s insulting to the community that is gravely affected by New-Indy.”

Bishop said that although the DHEC and the EPA “receive federal funding to protect the people of South Carolina and the environment,” they both “have failed.”

‘A Prisoner in Our Own Home’

According to co-lead counsel, the settlement is inadequate and “does not come close to fixing the pollution that continues to harm this community.”

Several people who spoke during public comment reported “feeling like a prisoner in our own home,” with symptoms such as migraines, bloody noses, nausea, irritability, anxiety, and fatigue.

Leslie Philips of Indian Land, South Carolina, said she’s more concerned about the long-term effects the pollution will have on her daughter. She said her family installed a $1,000 air filter system after she found that her daughter’s playroom reeked of fumes.

Maria and Reed Baker of Treetops, South Carolina, said their life now revolves around New-Indy and which way the wind is blowing to determine if they can go outside.

“Originally, it was the rotten egg smell, and it was very pervasive,” Reed Baker said. “It permeated the house for five months. As of late, it’s shifted and it’s now a sweet, pungent, chemical smell. I would categorize it as a cheap lavatory cleaning.”

Maria Baker compared it to being inside of a portable toilet while a campfire outside is burning soiled diapers.

Alan Snaider in Lancaster, South Carolina, called it a violation of his constitutional rights.

“We’ve paid our taxes,” Snaider said. “These are our inalienable rights, and they are being infringed upon. Life, liberty, and the pursuit of happiness. Is it shortening our lives? I don’t know. We’re not even at liberty to open the door or window at any time when the wind is blowing in the wrong direction. And as for the pursuit of happiness? No prisoners in their homes can be happy, so does it affect us? Yes.”

Snaider’s wife, Margaret Snaider, said she’s concerned not only about H2S in the air, but also other unknown chemicals, as well as what the mill could be dumping into the Catawba River.

Alan Snaider said the $1.1 million settlement from New-Indy was “like putting a band-aid on a gash.”

Jennifer and Charles Howard, also in Lancaster, South Carolina, said they closed off their vents at night because the smell was seeping into the house and waking them up.

“I have PTSD from Vietnam,” Charles Howard said. “I have to be able to get out of the house. I was crushed in a bunker. I won’t get into details, but the point is, I have this PTSD and I have to have the sense of being able to get out at any given time, and that’s restricting that.”

He reported a burning in his eyes, nose, and throat that doesn’t subside until four hours after reentering his home.

Another Lancaster, South Carolina, resident, Sylvia Hutchings, is a retired health care worker who said she’s having difficulty breathing and has resorted to using an inhaler.

“I stay in the house, and that’s not why I moved here, to be a prisoner in my own house,” Hutchings said, adding that the pollution is killing her.

“We’re all dying, but I don’t need to die by the New-Indy plant,” she said.

In a response to The Epoch Times’ request for comment, the EPA said that it is coordinating with the Department of Justice and DHEC to review the public comments made for the consent decree.

“EPA takes the surrounding communities’ ongoing concerns very seriously and intends to hold New-Indy accountable for any other violations of law or enforceable commitments,” the agency said.

DHEC responded to The Epoch Times’ request for comment with a March 12 press release stating that it’s actively investigating the “source or sources of the strong and persistent odors” in the affected counties.

“DHEC and local partners continue to work to resolve this nuisance,” DHEC said. “DHEC is investigating all concerns and remains committed to providing information to those affected by these odors.”

On the website for the New-Indy Catawba mill, the company states that after switching production from white paper to containerboard in 2021, excess solids were sent to the mill’s wastewater treatment system.

“This system had been minimally maintained by the mill’s prior owners, the extent of which did not become clear to New-Indy Catawba until after resuming manufacturing operations,” the company stated, adding that this was the cause of the “higher-than-normal hydrogen sulfide emissions.”

New-Indy and The Kraft Group did not respond to The Epoch Times’ request for comment.