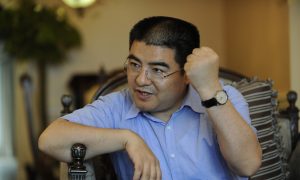 A series of large-scale anti-terror drills held April 29 by public security bureau staff of Jiangmen, southern China, attracted controversy when it was publicized that one of the scenarios pitted the police against rioting villagers.

About 650 police participated in the drills, which included three training scenarios, according to Southern Metropolis Daily, a Chinese paper.

The exercise causing the online uproar posits a scenario in which village residents— their property slated for destruction—use force to defend their homes against law enforcement personnel. It is then the task of the armed police forces to swiftly disperse and arrest the residents.

Chinese internet users did not take well to the “anti-terror” drill.

“The government demolishes people’s houses, then claims they are terrorists. How despicable!” one comment reads.

A user from Shanghai wrote that “the Jiangmen anti-terror exercise encourages developers to demolish more housing. Police that should be protecting private property and people’s safety have become the security guards for rich businessmen. How can there be any justice this way?”

With the increased urbanization of recent decades, forced property demolition has become a common flashpoint between Chinese residents and their local authorities.

Compensation for compulsory demolition is often determined on the whims of the authorities, those expropriated from their homes are not given enough money to purchase new housing.

Residents protesting against these injustices can suffer severe, even deadly repression from the authorities.

In an incident reported by Chinese media that occurred this April in Luoyang, Henan Province, a construction team demolished a house during the night. Twenty workers dragged three sleeping tenants out from their beds without allowing them to gather their belongings. A 70-year-old woman who owned the property was beaten and her spine was fractured.

Late this March, a couple in their 60s living in Taizhou, Zhejiang Province, was killed when their house mysteriously burned to the ground in the middle of the night. They had been involved in a dispute with developers who wanted to turn the property into a parking lot, according to state-run media Xinhua. Police are still investigating the case for possible arson plotted by the land developers.

The same month, a homeowner in Anhui Province, attempting to stop the demolition of his house, was killed by collapsing debris.