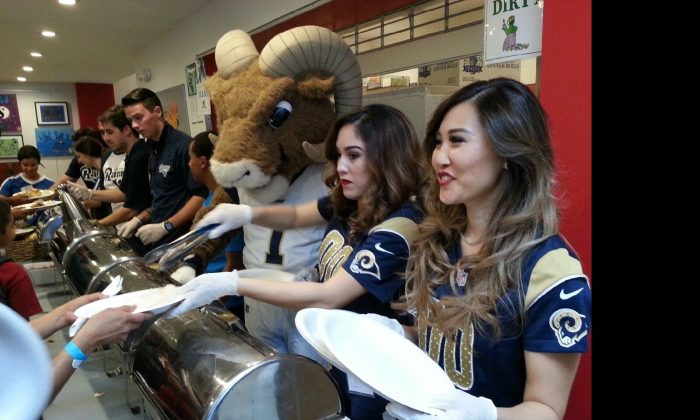 Community comes together in Los Angeles on Thanksgiving
By Tim Wahl

What could ring more fuzzy-feely this seasonal stretch of year than A Place Called Home? Sounding like a place to mosey on in for a spell and hang your hat, A Place Called Home serves as an oasis, a hearth pulsating in the mean, decayed streets of South Los Angeles. This nondescript structure with attractive signage provides a glimmer of what’s inside: A safe, nurturing environment for community residents, whose annual family income hovers around $28,000, with programs in arts, education, and wellness.

Maria Sosyan, A Place Called Home’s communications director, paints a picture that something magical must be happening inside.

“Youth gain hope, trust, and self-respect,” she says, “and develop the life skills and courage to transcend gangs, drugs, and poverty and take ownership for their own lives.”

A Place Called home is about giving back. Participants of the program in a way never leave because the foundation of the center is recycling, or returning what was reaped—a trend Ms. Sosyan described as “passing it forward.” For example, former participants in the entrepreneurship program return their seeds of knowledge to present-day student entrepreneurs.

This was the vision of Debrah Constance, who founded of A Place Called Home in 1993. The former executive with a realty company was influenced by the movie “Stand and Deliver,” a true story about a math teacher who performed a miracle with his students in a similar, impoverished Los Angeles community.

For an afternoon last week, giving back was in full view. The place many in the community might call a “home away from home” came alive with corporate and individual volunteers in the spirit of giving at Thanksgiving. American Airlines and the Los Angeles Rams joined forces to serve turkey and fixings to an estimated 1,000 visitors. Though none of the volunteers may have ever directly benefitted from A Place Called Home, it was apparent that to many volunteering at the event was kind of personal.

“Our small way of giving back,” says Tracie Gibbs, who heads customer service in the cargo division at American Airlines. Growing up in a disadvantaged household, her life had its share of early struggles.

For the second straight year, Frank Chiacchi volunteered, making the drive from the reposeful beach community of Santa Monica, only 16 miles away but seemingly light years from the sullen ambience of police sirens and broken store fronts that mark South LA.

“The world out there doesn’t matter,” Mr. Chiacchi says, pointing to the street. “When you come here, you see nothing but happy faces—all smiles.” He plans to make it back next year. “It’s a gift just to be here.”

Both Ms. Gibbs and Mr. Chiacchi’s commentaries were right at home next to a sign in the serving area, encouraging “an attitude of gratitude.”

Describing themselves as “fortunate to be Los Angeles Rams Cheerleaders,” Su Jan and Raquel expressed their gratitude to serve at the event. “Our way of connecting with the community … of spreading goodwill on behalf of the Los Angeles Rams,” says Su Jan, who, like most other volunteers, could have been home getting ready for the big day with family and friends but chose to dedicate a few hours to persons less fortunate than themselves.

The entrée for the event was donated by Delaware North, a global food service and hospitality company. But the vegetables and greens for salad were the unique product of the community gardens cultivated by members at A Place Called Home.

Indeed, the gardens, which flaunt organic fruits and vegetables, symbolize the mission of A Place Called Home, which Ms. Sosyan notes, endeavors to impart an organic-like attitude of self-sufficiency in the eyes of participants in its programs and services, which, in addition to entrepreneurship, include a continuation school, fitness and nutrition programs, organized sports, tutoring, and literacy. An in-house counseling center responds to the psychological needs of individuals and families.

The vegetable gardening program enables members to “get in touch with nature and grow healthy, fresh food,” says Ms. Sosyan. “We provide hundreds of daily, nutritious meals and snacks prepared from scratch in our kitchen.” In some cases, she notes, the meal at A Place Called Home may be the only one a member may have the entire day.

This attitude of gratitude may have added value, suggests Ms. Sosyan, to those who cultivated the crops and got to see the fruits of their labor enjoyed by the visitors to the afternoon’s Thanksgiving feast.

All in all, an attitude of gratitude flavored the event with a tincture of one other common denominator—one of teamwork and community—best put by the inscription on the tee-shirt of one volunteer, Kevin Demoff, chief operations officer for the Rams: “We not me.”

Tim Wahl is an ESL teacher and a writer in Los Angeles, California.  His book ‘Footballogy: An English Learner’s Guide to American Football” is to be released in summer 2018.