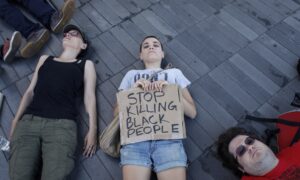 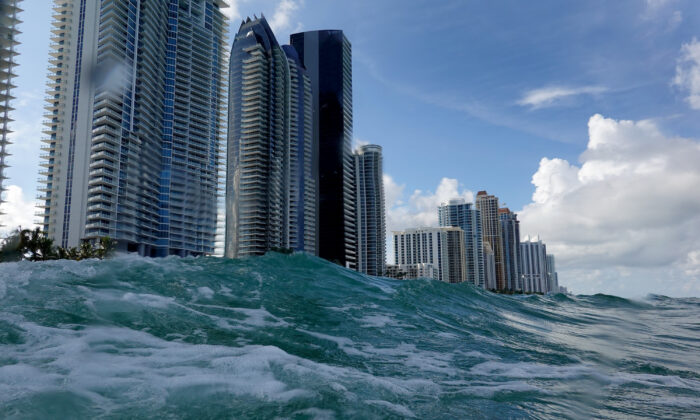 Waves lap ashore near condo buildings on the day the United Nations released a report with a dire warning for humanity, in Sunny Isles, Fla., on Aug, 9, 2021. (Joe Raedle/Getty Images)
Viewpoints

A Pickle: How to Convince Voters Skeptical of Climate Change to Make Sacrifices on Its Behalf

Here’s a headline from the Aug. 9 (London) Daily Telegraph: “The political question of our era is how to tackle climate change without losing voters.”

Sounds plausible, doesn’t it? Maybe even profound. But the more you think about this statement, the more curious it seems.

Of course, you can see what Tom Harris, the author of the article, is getting at. He takes the view—as do most of those in the media who write on this subject—that the need “to tackle climate change” is both (a) urgent and (b) unpopular.

He doesn’t see the contradiction between these two beliefs.

His article was occasioned by the most recent case for urgency, a nearly 4,000-page report by the Intergovernmental Panel on Climate Change in which, if you believe The Washington Post, “scientists” warned “that time is running out for the world to make immediate and dramatic cuts to emissions produced by the burning of fossil fuels and other human activities.”

In the words of United Nations Secretary-General António Guterres, the report is a “code red for humanity.”

Seems to me I’ve heard something like that before—maybe in the five previous reports by the same panel over the more than 30 years of its existence—reports that have already contributed so much to turning the “existential threat” of global warming into the political cliché it has become.

And yet, somehow the time that has been supposed for so long to be running out continues to run and run. And run.

In other words, most people—most people who aren’t devotees of the quasi-religious cult of climate change apocalypticism, anyway—are growing a little bit skeptical of the case for urgency.

Could that be the reason why drastic measures, like the goal of net-zero carbon emissions to which both the UK and the United States are now committed, are unpopular?

“History,” Harris writes confidently, “will judge [governments] harshly if they choose not to take a leading role in practical measures to limit global temperature rises.”

Like so many progressives, he takes it for granted that he already knows what the historians of the future will say about him and his presumptively benighted contemporaries—which is why he assumes the latter are out of step with their leaders. They’re just not as smart.

Progressive leaders must therefore expect that “they will be judged just as harshly by voters in the next couple of years if they propose measures that result in ordinary citizens—particularly those from low-income backgrounds—having to resign themselves to a measurable fall in living standards.”

What to do! Yet if tackling climate change were genuinely as urgent as he believes, and as politically active scientists, along with the Greta Thunbergs of the world, routinely tell us it is, how could it not also be popular? Even war and all its terrible sacrifices—of life as well as living standards—is popular if people believe that without it, they face a real existential threat to the nation.

Once the bombs started falling on London in 1940, there were few dissenters who failed to recognize the need to “tackle” the Nazi war machine, whatever the cost to themselves.

Isn’t the problem, then, that the warmists have oversold their case for urgency? For over 30 years, they have been telling us that climate catastrophe is just around the corner. They’re still saying it. “Democrats Have a Year to Save the Planet,” wrote Farhad Manjoo in The New York Times at the end of June.

Small wonder, then, if more and more people are disinclined to believe that the “climate crisis” is really a crisis.

And if they feel deceived about that, they also feel deceived about the diplomacy of the warmists. Harris himself recognizes this when he acknowledges that “unless the international community means what it signs up to at this year’s Cop26 conference in Glasgow, UK voters could be asked to make sacrifices only for them to be rendered valueless by others’ failure to follow suit.”

“Could be”? Better say, “will be.” There can’t be many people not given to wishful thinking who suppose that China, the world’s No. 1 carbon emitter, will ever join the virtuous nations at net-zero. Which is one indication among many that the point of net-zero is to signal that virtue, rather than to have any real effect on the climate. Pardon me if I decline to consider such virtue-signaling a matter of urgency.

A certain strain of warmist thinking, particularly associated with John Kerry, President Joe Biden’s chief climate diplomat, compounds these deceptions with an even more egregious pretense that there really are no sacrifices needing to be made, and that the people thrown out of work by the abolition of fossil fuels will readily find “high-paying jobs” in the new field of “green energy”—the price of which will inevitably fall until it becomes competitive with gas, oil, or coal.

To his credit, Harris doesn’t pretend that there won’t be sacrifices.

“It is the voters, not ministers,” he writes, “who need to be convinced that their living standards are expendable in the fight against climate change.”

Good luck with that!

The reader will have gathered that I don’t believe it even conceivably possible that such a persuasive effort could succeed, even if the evidence of catastrophic climate change some years ahead were greater than it is.

Maybe that’s why the “John Lewis Voting Rights Advancement Act” is such a high Democratic priority. Some such attempt to rig future elections in their own favor is necessary if voters prove unwilling to be “convinced” of the need for sacrificing their living standards and have to be told—by the denial of political legitimacy to any other point of view—that they have no choice in the matter.

The answer to Harris’s “political question of our era” might just be for politicians to drop the apocalyptic hyperbole about climate change and the sacrifices necessary (or maybe not so necessary) to “tackle” it—as well as to think of some more creative and palatable solutions than simply raising the cost of energy so high that they impoverish their own countries to pay for it.