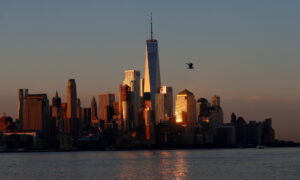 A Phony Outrage Distracts From Media’s Role in Targeting Trump

Democratic Party officials and their media partners are out for blood after news that Donald Trump’s Department of Justice subpoenaed the data of reporters and Democratic congressmen. Democrats on the House Judiciary Committee have already set up one investigation to go along with the DOJ’s own probe.

In other words, they’re taking revenge. Because Trump officials failed to hold anyone accountable for leaking classified information to prosecute a campaign of political warfare, they made themselves vulnerable to the same operatives who now mean to finish them off.

Trump’s first attorney general, Jeff Sessions, said in November 2017 that the DOJ was investigating 27 leaks of classified intelligence. Most of the leaks were tasked to advance the Trump–Russia narrative, but more generally officials leaked to show that Trump had no control over the government he was elected to run.

The press was the essential component in the anti-Trump campaign. In volunteering themselves as a platform for classified information leaked, not to shed light on government corruption or abuse, but to join spies in a political operation against Trump and his aides, media organizations squandered their prestige and made a joke of the First Amendment.

To trip up Trump aides, for instance, The Washington Post’s Adam Entous, Greg Miller, and Ellen Nakashima published leaks of classified foreign intelligence intercepts of the Russian ambassador to Washington’s conversations with U.S. officials, including national security adviser Michael Flynn. Trump’s DOJ obtained the data of the Post team for an investigation reportedly related to an article on Sessions that also was sourced to an intercept of the Russian envoy.

The media’s phony outrage regarding the recent disclosures, its self-portrait of the press as victim, is to deflect attention from its role in abetting a deep state crime spree. They’ve shifted the focus to Trump officials, such as Sessions and his successor, William Barr, both of whom will likely be called to testify before Congress, where they will be poked like political voodoo dolls to get at their former boss. So what if Barack Obama’s DOJ also seized journalists’ data and even spied on reporters? Trump is uniquely evil. Plus, he also had the gall to subpoena the records of congressmen, Adam Schiff and Eric Swalwell in particular.

It’s worth recalling that as chairman of the House Permanent Select Committee on Intelligence (HPSCI), Schiff subpoenaed and published the phone records of Republican colleagues, staffers, journalists, and Trump lawyer Rudy Giuliani simply because they were trying to find out what shady business practices Joe Biden and his son Hunter were up to in Ukraine. But investigating Schiff and his HPSCI colleague Swalwell was hardly revenge. It appears that HPSCI Democrats regularly leaked to the press, including testimony from the committee’s Russia hearings. For instance, parts of Susan Rice’s September 2017 testimony revealing the identities of Trump officials that she unredacted from the transcript of a classified intercept were leaked to CNN.

It’s not clear what leaks turned the DOJ’s attention to Schiff and Swalwell, but according to The New York Times, its reporters’ records were seized in relation to an investigation of former FBI director James Comey. Investigators were interested in an April 22, 2017 article—“Comey Tried to Shield the F.B.I. From Politics. Then He Shaped an Election”—bylined by the four NY Times writers whose records were obtained: Matt Αpuzzo, Michael S. Schmidt, Adam Goldman, and Eric Lichtblau. A key section of the article explained why Comey took it upon himself to close the investigation of Hillary Clinton’s email server rather than leave the decision to the Justice Department.

According to the NY Times, the FBI had received a number of documents in early 2016 showing that the Russians had hacked communications from a senior Democratic official, who claimed that a colleague in touch with Attorney General Loretta Lynch “expressed confidence that Ms. Lynch would keep the Clinton investigation from going too far.” Comey, the NY Times related, was concerned that if the Russians made the hacked communications public it would show that the Clinton investigation was compromised.

Details provided in a later NY Times article suggested that whoever was behind the leak may have revealed sensitive information about intelligence collection. Dutch agents, wrote the NY Times, “siphoned” the material “off Russian computers” and passed it to the U.S. government.

The NY Times reported that last month, the FBI asked Comey to come in for an interview, and he declined. Even if he had leaked sensitive information, it’s inconceivable that the Biden Justice Department would charge the man who played such an important role in the anti-Trump operation. It was Comey, after all, who leaked notes of his meetings with the president to the NY Times, ensuring the appointment of the special counsel that dogged Trump for nearly two years.

Biden says his Justice Department won’t go after reporters’ data. “It’s simply, simply wrong,” said the president. “I will not let that happen.” But there’s no reason for him to do so. Biden and the press and the top levels of the intelligence bureaucracy are on the same side—they wouldn’t dream of leaking to hurt their own team.

“They only leak against opponents,” says the lead investigator of a federal agency. “Look at all the leaks against Trump and none against Biden. It’s further proof, if you need it, that there really is a deep state.”

And it grows stronger. Since there was no price to be paid for leaking classified information to destroy a political opponent, Washington’s permanent bureaucracy and its auxiliaries in the media are further incentivized, sowing distrust among Americans and thereby tearing at the fabric that binds the republic.