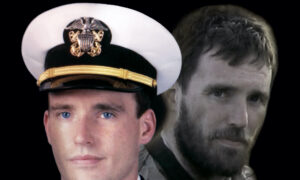 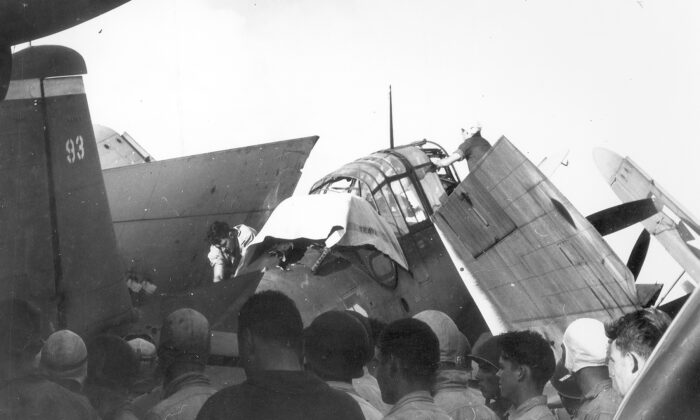 A deck crewman has covered up Loyce Deen while a decision is being made what to do with the aircraft, which sustained heavy battle damage. (Courtesy CDR Michael Cosgrove (Ret.), son of Robert D. Cosgrove via NavSource)
Viewpoints

Pop, the uncle who raised me, carried with him for more than half a century a haunting memory from his time aboard the aircraft carrier Essex in World War II. Anti-aircraft fire had killed a turret gunner during a sortie. Pop, whose job it was to repair and prepare planes for the next mission, went up to inspect the plane as soon as it landed.

What he encountered was a gruesome sight: the decapitated body of the turret gunner in a blood-soaked turret.

The captain of the Essex dispatched the ship’s chaplain to ask Pop if the plane could be patched up enough to fly again. Pop’s reply to the captain, via the chaplain/messenger, was: “Yes, but with all this blood in the tropical heat, it will stink to high heaven. I recommend we bury this man in the plane in which he had given his life for his country.” When the chaplain relayed Pop’s message to the captain on the bridge, the captain turned to Pop and gave him the thumbs-up signal. The subsequent burial at sea was unique. It was the only time during World War II that a still-flightworthy aircraft was used as a coffin.

The burial scene was included in the 1950s series “Victory at Sea.” Pop saw it for the first time when the series was rebroadcast in the 1990s. Seeing that footage from onboard the Essex kicked Pop’s disturbing memories into overdrive. For years afterward, he would often retell that vivid story late at night after consuming copious quantities of Jim Beam.

The story didn’t end for me with Pop’s passing in 1999. Several years later, I stumbled onto a website about the airman who was buried in his plane. (The website, by the way, includes the footage of the burial at sea.) Suddenly, I knew the man’s name, his family background, and details of his military service. The man who lost his life on that aircraft that day was Loyce Edward Deen of Altus, Oklahoma. The fatal flight took place on Nov. 5, 1944, in the Battle of Manila. The three-crew plane was the Grumman TBM (torpedo bomber) V-15.

The young Oklahoman seems like the kind of neighbor, classmate, friend, and comrade in arms that everybody would love to have. Loyce was his parents’ seventh child. He was followed four years later by one last sibling, a brother with Down’s syndrome. Loyce was very close to his kid brother, but sadly, this brother died when Loyce was in 8th grade. Three years later, his mom had a stroke. Loyce helped care for her until she passed away about a month later.

In 1942, Loyce joined the Navy. On Oct. 24, 1944, his foot was wounded by shrapnel in the Battle of Leyte Gulf. Heroically, he simply wrapped his foot and continued to fight on both the 24th and 25th. At month-end, Loyce had the option of recuperating on a hospital ship until his foot mended. Instead, he insisted on staying with his two crewmates, pilot Lt. Robert Cosgrove and Radioman Donald “Digby” Denzek. Character, courage, loyalty, and love—Loyce Deen had them in spades. It was people like him who made the United States great.

The next week, on Nov. 5, at the age of 23, Loyce was killed instantly by anti-aircraft fire during a sortie. One memorable detail is the stoicism of Loyce’s crewmates. Denzek reported to Cosgrove over the intercom that “Deen was hit bad.” “Hit bad”—what a compassionate and wise euphemism. Denzek didn’t want to grieve or distract Cosgrove with the distressing news of their friend’s death when the 24-year-old pilot still faced the nerve-wracking task of flying a damaged aircraft two anxious hours back to the Essex.

I feel like I knew Loyce Deen, even though our lifespans didn’t overlap and I’ve never met anyone who actually knew him. “Knowing” him has made a significant difference in my life. The most important male relatives in my life all saw combat in either World War II or Vietnam, but—thank you, Lord—none was killed in action. For most of my life, then, Memorial Day was always more of a general than a specific remembrance. That all changed when I found the Loyce Deen website. (Thank you, Gregg Mastriforte, webmaster.)

My Memorial Days are now fuller and more meaningful than before because of the dramatic way in which Loyce crossed paths with Pop.

I’m sure the descendants of Loyce’s brothers and sisters know what a good man and great hero their great-uncle was. Through this article, I hope many more people will know about him. On Memorial Day 2021, this solemn, reverential holiday, may all patriotic Americans honor the memory of tens of thousands of America’s best—people like Loyce Deen—who gave their lives that we and countless others might live in liberty.

Thank you, Loyce. God bless you. And God bless all the other Americans who made the ultimate sacrifice in service to our country.