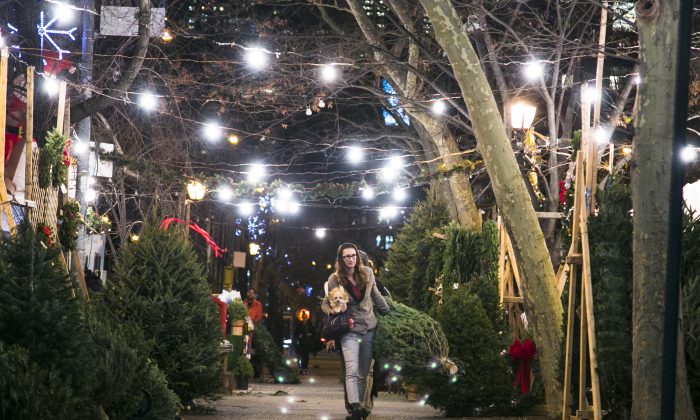 At SoHo Square, the smell of clean crisp pine permeates the air, inviting passersby to pause and admire the majestic Christmas trees standing utterly still against the bustling city landscape.

Two young boys laugh as they weave in and out of colorful Christmas decorations tastefully scattered between rows of trees. An enormous inflatable snowman greets them as they run past. Their father points at the trunk of the tree that he’s just chosen and tells the young employee that it needs to be trimmed.

Business is good for Scott Lechner, the owner of SoHo Trees. He has been selling trees in New York for 36 years and runs Christmas tree stands at seven locations.

Purchasing fresh Christmas trees from sidewalk stands is an annual tradition for many New Yorkers. This arcane economy has contributed in bringing joy to Christmas and has also allowed people from around the world to experience the romantic holiday season New York has to offer.

Yet unbeknownst to most, the cheery displays at tree stands mask an enormous cash business with intense competition between some vendors.

Christmas trees stands have been a fixture on the streets of New York since the first lot was set up in Lower Manhattan in 1851. Until the early 20th century, the market was dominated by immigrant street peddlers.

In 1938, Mayor Fiorello La Guardia wanted to clean up the black market trade, and declared a “War on Christmas” cracking down on the vendors.

Many New Yorkers were devastated when Christmas tree sellers started disappearing from the city sidewalks, prompting City Council to go around the mayor and enact the “coniferous tree exception.” The exception allows shopkeepers and peddlers to display and sell trees on the sidewalk during December without a permit, provided the businesses fronting the sidewalk agree and they keep a corridor open for pedestrians.

This exception attracted many tree farmers, entrepreneurs, and family businesses to operate stands on the streets of New York. Soon temporary pine forests began returning to the concrete jungle resulting in a special Christmas tree culture New Yorkers have come to love and appreciate.

Loyal patrons make annual trips to their closest tree stand to pick out a fragrant Fraser fir or a fresh white pine. Despite the fierce competition from large chain stores, selling trees on sidewalks has prevailed as a lucrative market.

While there are no accurate figures for Christmas tree sales in New York—due to the lack of oversight—the U.S. Christmas tree industry as a whole was worth $1.04 billion in 2014, according to the National Christmas Tree Association.

Lechner said that each year 800 to 1,000 people from around the world apply for the 70 to 80 positions he has to offer. Some of his applicants have told him during their job interviews that selling Christmas trees in New York has been their lifelong dream.

“It’s fun. It’s the road less traveled. People want to do it,” he said.

Christmas tree stands stay open 24 hours throughout December, with some starting as early as Thanksgiving.

Despite the never-ending hours and biting cold, Lechner said there is something freeing and romantic about leaving everything behind to sell Christmas trees in New York—people enjoy the unfettered life, he said.

In another part of town, a young man, who does not want to be named, carves the end of a stray branch with his well-used utility knife. Beside him sit pieces of round wood leftover from trimming trunks. Wood shavings are scattered in an unfastidious manner on the ground.

He looks up and flashes a smile after sticking the carved branch into a hole in a piece of wood. Unsatisfied with the length of the branch, he expertly snips at it with his tree clippers. He said he was making a reindeer.

The geography student with dreadlocks has traveled multiple times from Montreal to sell trees in New York. He spends 16 to 18 hours a day manning the stand, and sleeps in a van parked across the street.

He goes to the nearby coffee shops to relieve himself and joined the gym to maintain his personal hygiene.

When business is quiet, he enjoys striking up conversations, and sometimes friendships, with strangers and shop owners in the area. There is an air of camaraderie.

Days can be quite mundane, but the liveliness of the city keeps him amused. Sometimes, young couples borrow his bench for a romantic date amid his mini-forest.

One time an inebriated man unsuccessfully attempted to carry a tree off without payment. His partner called him out. The man apologized and said he’d come back to buy the tree the next morning. He did.

It is a challenging job that requires persistence, but clearly it has an appeal. He said he wants to come back again next year.

On average, a Manhattan stand selling 300 trees can earn approximately $30,000 and even more in wealthier neighborhoods like the Upper East Side. Employees can cash in $5,000–$7,000 or more for the season depending on the location, a former tree vendor, who did not want to be named, told the Epoch Times.

The vendor said it’s an all cash business. According to the Department of Taxation and Finance, sales tax on Christmas trees is required, but it’s questionable how much that happens.

Some tree vendors engage in dirty tactics due to the intense competition between stands—betrayals are common.

While the city may lose out on sales tax, it does benefit financially through leasing space to tree vendors who want to sell in city parks. The amount for the concession is usually procured through a request for bids.

This year, the most expensive location was at SoHo Square at Spring Street and Sixth Avenue leasing for $56,005. The cheapest was at Montefiore Square on West 137th Street and Broadway, at $885.

The city projects earning about $430,000 in concessions during the 2016 fiscal year.

The Dark Side of Tree Selling

Lechner said that some tree vendors engage in dirty tactics due to the intense competition between stands—betrayals are common.

“They pay the store owner some money and all of a sudden you lose your spot and the clientele that you’ve spent years building,” Lechner said.

Some Christmas tree stand owners, he said, take advantage of their employees.

“Some dishonest owners will give their workers 60 percent of the money they promised,” he said. “They say, ‘Sorry, it was a bad season.'”

Sales are contingent on the weather and on competition from other stands and chain stores in the area. The unpredictability and the uncertain nature of the business induce intense animosity between tree vendors. In order to get ahead, some tree vendors use threats and intimidation to scare off their competitors.

The former tree stand vendor opened his first tree stand on the Upper West Side of Manhattan in 2008. As a newcomer, he made the mistake of selling trees in someone else’s territory. His competitors from two streets away came over to threaten him.

“It was a battle. They were screaming ‘You’re going to find your trees on fire!”’ he said. “It’s all unwritten rules. There’s no oversight.”

The city delegates responsibility for managing street vending to store owners, building managers, police officers, and the vendor themselves, according to Ryan Thomas Devlin in his dissertation “Informal Urbanization: Legal Ambiguity, Uncertainty, and the Management of Street Vending in New York City.”

Despite the occasional display of belligerent business tactics, there’s still a degree of camaraderie and maybe even a Christmas Tree Sellers code. For example, nobody’s willing to start a price war that will end up hurting everyone.

And given the popularity of Christmas tree stands among New Yorkers, most likely they’ll endure as a merry addition to the city landscape every holiday season.

Amelia Pang contributed to this report.