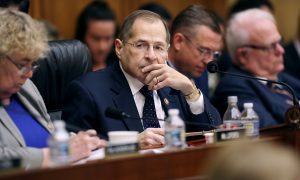 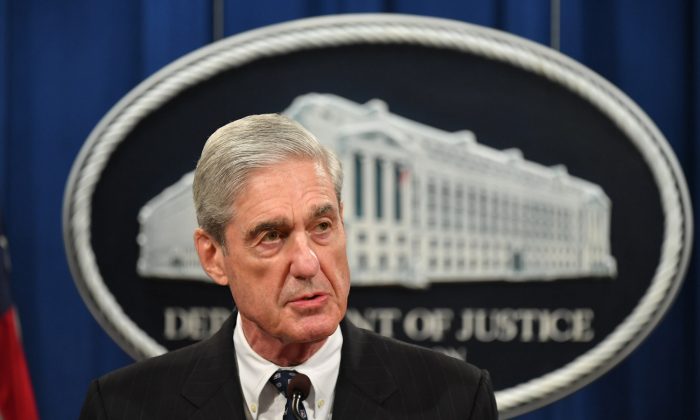 Special counsel Robert Mueller speaks on the investigation into Russian interference in the 2016 Presidential election, at the Department of Justice in Washington on May 29, 2019. (Mandel Ngan/AFP/Getty Images)
Viewpoints

A Partisan Mueller Seeks, Without Evidence, to Incite Impeachment

Special counsel Robert Mueller’s deep-seated bias against President Donald Trump was on full display on May 29, as was his willingness to abdicate his duties and obscure the conclusions of his own report.

Mueller explained that Department of Justice (DOJ) regulations preclude charging a sitting president with a federal crime, and, therefore, his office didn’t consider that option. He added, “The Constitution requires a process other than the criminal justice system to formally accuse a sitting president of wrongdoing.”

For openers, it’s not settled law that a sitting president can’t be charged with a crime. Some constitutional scholars argue that the separation-of-powers principle precludes the criminal prosecution of a sitting president, but others note that the Constitution doesn’t expressly so state, as the Founding Fathers easily could have written.

So why did Mueller make that point—or at least pretend—that he was powerless to charge Trump with a crime? Because he wanted it to appear as if that was the real reason he didn’t recommend the prosecution of  Trump.

The prosecutor is not an op-ed writer, a talking head, or commentator. His role is to charge or not charge. Period. If a prosecutor charges a crime, then it’s up to the charged individual to defend himself in a court of law, and that court, by a jury of the charged man’s peers, either convicts or acquits.

Prosecutors in this country have never (until Mueller) offered to explain why they didn’t charge; they aren’t supposed to say: I think the guy was guilty—I saw no exculpatory evidence proving the target’s innocence—but there was insufficient incriminating evidence, so I didn’t charge him.

Mueller’s comments about DOJ policy not permitting a sitting president to be charged with a federal crime were entirely gratuitous, They were designed to inflame an impeachment effort and maximize the political damage to Trump.

If a sitting president can’t be charged with a crime, then what was the point of Mueller’s appointment to begin with? Mueller was still appointed. Why?

For at least four reasons: 1) Mueller, as special counsel reporting to but not within the DOJ per se, could have recommended the president’s prosecution if he uncovered compelling evidence of a serious crime (whether DOJ would follow that recommendation and what would happen, if it didn’t, is another matter); 2) Americans wanted to know whether their president committed a crime, whether or not he can now be so charged; 3) if Trump did commit the crime of obstruction of justice, he could be charged after he left office (if the statute of limitations had not by then run out), which could be as soon as January 2021; and 4) a sitting president can be impeached if he is found to have committed a serious crime.

It was, therefore, pointless to note what we all knew going in—that under DOJ policy, a sitting president cannot be charged with a federal crime. Unless, of course, one’s point is to fan the flames of impeachment. Said another way, if Mueller did uncover evidence of obstruction, he certainly would have, at a minimum, “reported a conclusion” that Trump had committed the crime of obstruction, even without formally recommending that DOJ charge him with such crime.

His point about a sitting president not being chargeable with a federal crime under DOJ policy was therefore intended to obscure his failure to find evidence that Trump committed obstruction, by disingenuously suggesting he only failed to conclude that Trump committed obstruction, because he was powerless to charge the president with a federal crime.

Why a Special Counsel?

But one must ask—why was a special counsel appointed to investigate Trump in the first place?

Recall that Mueller was appointed in the aftermath of Trump’s firing of FBI Director James Comey. The suggestion by the president’s critics, at the time, was that that act itself amounted to obstruction of justice since Comey was then leading an investigation into Russian election interference (though he falsely told Trump he wasn’t a target). Thus, a principal focus of the Mueller investigation was whether Trump had committed the crime of obstruction of justice.

Yet, here, what did Mueller do? On a crucial task with which he was charged—determining whether Trump committed obstruction—Mueller punted, sending the determination back to Attorney General William Barr, who works directly under Trump. In other words, after being appointed because someone independent, outside DOJ, was needed to assess whether Trump committed obstruction of justice, Mueller—that independent person—sent that very question back to the head of “Trump’s” DOJ.

Which raises the question: Why would Mueller commit such an obvious abdication of his own assigned duty? The answer is clear: Having found no evidence that Trump committed obstruction of justice, and faced, as a result, with having to conclude he didn’t commit obstruction, Mueller—in a final desperate, partisan act—refused to affirmatively exonerate Trump, and sent the very question he was tasked with answering as a special counsel back to the head of the DOJ, who serves under and at Trump’s pleasure.

Mueller knew that, faced with no evidence of the crime, Barr would make the same determination Mueller would have been forced to make had he done his job—by declining to conclude that Trump had committed obstruction.

Mueller also knew that Barr’s conclusion would be distrusted by many Democrats (and the media)—for the very same reason that Mueller was appointed in the first place: because Barr works for Trump.

Thus, refusing to come to a conclusion on obstruction presented Mueller with the least-worst option from his highly partisan perspective (given the lack of evidence of obstruction). Mueller knew that by abdicating his duty and referring the obstruction determination to someone who works for Trump, he would keep alive the prospect of impeachment and, even in the absence of impeachment, inflict maximum political damage on Trump.

Mueller’s remarks present a stunning reversal of the presumption of innocence central to our system of jurisprudence. There’s no question that Mueller knew his remarks did just that.

In sum, Mueller didn’t fail to come to a conclusion on obstruction because a sitting president can’t be charged with a federal crime or because there was no clear evidence proving Trump’s innocence, as his remarks were designed to lead Americans to believe. To the contrary, after 2,800 subpoenas and nearly 500 search warrants, at a cost to U.S. taxpayers of more than $30 million, Mueller simply came up empty-handed on obstruction. Mueller was arguably free to recommend prosecution, and certainly free to conclude that Trump had committed the crime of obstruction, without recommending prosecution, but there was just no evidence to support that conclusion.

Knowing that the evidence his exhaustive nearly-two-year long investigation had yielded (or not yielded) compelled the opposition conclusion, Mueller abdicated his responsibility in favor of forcing Barr to issue the “no obstruction” conclusion, so that that conclusion could be assailed as that of a conflicted attorney, leaving the door open to impeachment.

Indeed, it’s no accident Mueller waited while the media’s attacks on Barr’s alleged bias fermented before making his remarks. Yet, absent his partisanship and willingness to abdicate his duties, it’s clear Mueller would have been forced come to the same conclusion Barr did—that Trump didn’t commit obstruction of justice or any other crime. Wednesday’s remarks were merely Mueller’s partisan efforts to ensure the impeachment door remained open, despite his abject failure to find evidence of obstruction.