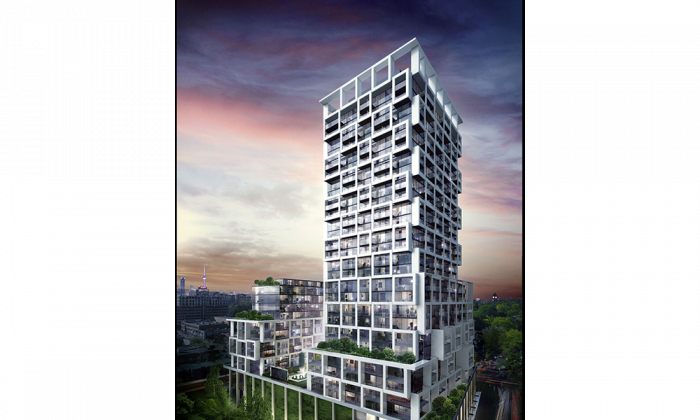 Rendering of Art Shoppe Condos + Lofts to be built in Toronto's Yonge and Eglinton area. The property will consist of two towers with both sharing a common base. Fashion icon Karl Lagerfeld is designing the The Art Shoppe’s lobbies. (Courtesy Freed Developments/CD Capital)
Canadian Content

Art Shoppe Condos is a joint venture between Freed Developments and CD Capital—a partnership that was forged between like-minded developers who together are creating one of Toronto’s most iconic mixed-use developments.

Freed Developments president Peter Freed is a strong believer in the “live, work, and play in your neighbourhood” principal. Freed has created some of the city’s most interesting condominium developments, transforming neighbourhoods like King Street West, St. Lawrence Market, and Portland Street into thriving, cool hubs of exciting lifestyle residences surrounded by the Toronto’s most iconic amenities.

CD Capital was founded by Todd Cowan and Jordan Dermer, previously the chief executive and chief development officers of TriGranit Development, where they were actively involved in the development of over 10 million square feet in Europe from 1996 to 2006.

Art Shoppe Condos recently held its Grand Opening event to overwhelming accolades. More than 80 percent of the building’s 640 suites sold in just two months, attesting to its popularity in the marketplace.

Aside from an incredible Yonge and Eglinton location, surrounded by the city’s finest amenities, transportation, and lifestyle, Art Shoppe Condos has a fashion connection that happens to be a first in the world.

Karl Lagerfeld, the so-called “Pope of Fashion” and the creative force behind brands Chanel and Fendi as well as his own brand, has been commissioned to design The Art Shoppe’s north and south lobbies.

According to Rabinovich, “Art Shoppe will be the signature building of the Yonge Eglinton area. The Lagerfeld lobbies will propel this condominium to world-class status.”

Freed was the first developer to initiate a partnership between designer fashion brands and condominiums—a strategy that has been adopted by other developers who have used designer brand furniture in their common areas in exchange for the use of the designer’s name on the building.

“But in those instances,” says Rabinovich, “the designer has nothing to do with the design itself. Karl Lagerfeld is driving the entire creative design process on the two lobbies at Art Shoppe.”

How did these two development companies get Lagerfeld? It seems an incredible coup.

“Karl Lagerfeld came about when my partners sat around the table contemplating how we could elevate Art Shoppe Condos to a new height. We felt it was our obligation in this city with so many similar projects being built and marketed to create something new, different, original that had some extra refinement to it,” Dermer explains.

Rabinovich interjects, “We always knew that we wanted Art Shoppe to have an X-Factor—we wanted to affiliate with a world-class designer. We reached out to Karl Lagerfeld and when he saw our vision for Art Shoppe, he came on board right away.”

“Lagerfeld is brilliant,” adds Dermer. “He’s a hard worker. He’s extremely talented. We’ve already had several meetings with him personally and his team both in Paris and in Toronto where he’s put his design stamp significantly on both lobbies. Lagerfeld himself runs the meetings. He does all the drawings, all the design aesthetic, the look, the feel. Selecting all the furniture, the colours, the accessories, the lighting—it’s all Karl. He has been a pleasure to work with.”

Art Shoppe Condos is a total anomaly in the marketplace. Where most condominiums today are small and selling to investors who will rent their units out, Art Shoppe is different. Over 40 percent of the suites are 2-bedroom units or larger. And the majority of sales are going to end-users, mostly professionals who grew up in the neighbourhood and want to continue living here.