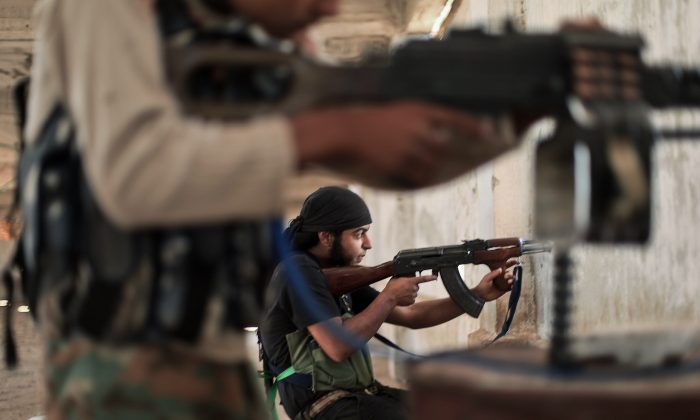 Rebel fighters from the Islamic Front, Syria's largest rebel coalition, hold a position on July 13, 2014, during clashes with militants of the Islamic State (IS). (Ahmed Deeb/Getty Images)
Middle East

A New Coalition of the Willing Against ISIS

As the Islamic State continues to conquer territory in both Iraq and Syria, the United States has responded with targeted airstrikes intended to roll back Sunni extremists in Iraq. Although ISIS has become a potential threat to Europe and the rest of the Middle East, many of these same nations may be unwilling to fight ISIS with the United States. Some have other problems like the continuing crisis in Eastern Europe, or slower than expected economic recovery, and others fiercely criticized the 2003 invasion of Iraq.

There is increasing pressure on the U.S. to react to the dramatic rise of ISIS. The U.S. first needs to identify its national interests. If the U.S. determines that ISIS is a threat to national security, it will need a carefully calibrated long-term multi-faceted regional policy – working with allies. U.S. action in the region will inevitably have unintended consequences – but non-action is also fraught with risk.

Sunni Arabs in the Levant and Iraq are key to defeating ISIS. As ISIS took control of vast swathes of territory, tens of thousands fled in its wake. Others, however, remained, often tolerating ISIS as the lesser of two evils when compared with the Assad and Maliki regimes.

Sunni Arabs in Iraq and Levant will stop supporting ISIS once they see that it cannot win, does not deliver stability, and there are better alternatives.

Military containment. Accurate airstrikes and support to local ground forces can help contain ISIS and stop its advances. However, if not done correctly, this can increase refugee flows and push Sunni Arabs to seek ISIS’s protection.

Better government. The new Iraqi government should be encouraged to be inclusive, address Sunni and Kurdish grievances, and radically decentralize power. Saudi – and other Sunni powers – need to embrace it and show goodwill to Shias. Iran needs to be pushed to accept power-sharing negotiations in Syria.

Outreach to Sunni armed groups. Support should be increased to carefully identified Sunni Arab groups to help them fight ISIS.

It’s likely that several international partners and regional allies would join the U.S. in any enhanced effort to strike ISIS targets with air power and sea-launched cruise missiles. But the central point to make here is that ISIS cannot be defeated by kinetic power alone. It is a product of—and thrives on—the instability and absence of effective governance found in both Syria and Iraq today. ISIS therefore can only be eliminated by altering the political environment in those countries.

In Iraq there is a chance of international military action being able to achieve some meaningful tactical success against the Islamic State. Its momentum, which has already slowed considerably, can be halted and its capabilities significantly degraded in order to give the Iraqi army the time and breathing room needed to mount an effective counteroffensive. But any such success will be ephemeral if Iraq’s government does not rise to the challenge of providing better and more inclusive governance  in these areas.

In Syria, the situation is more complex insofar as there are a wide range of Islamist militias operating on the ground, some of which actually oppose ISIS, but they are not always easy to distinguish for purposes of target selection—hence the new U.S. reconnaissance efforts. There is also the question of how international armed action in Syria would alter the military balance in that country, with the risk of handing Bashar al-Assad a decisive upper hand if he no longer has to worry about ISIS.

While some measure of international cooperation may help the U.S. to put a broader face on any new military action, the fact remains that the real prospects for eliminating ISIS lie with actors in the region itself.

Any attempt to defeat ISIS will require the U.S. to cooperate with a broad coalition of governments. Given Iran’s influence in both Iraq and Syria, the U.S. would be well-served by exploring the potential of working with Iran as part of or in parallel to such a coalition.

Cooperation with Iran to thwart a common extremist threat has a notable precedent. Following the 9/11 attacks, converging interests against Al-Qaeda led to Iran’s direct collaboration with the U.S. to establish a democratic government in Kabul.

Direct bilateral exchanges between the U.S. and Iran on Iran’s nuclear program — which were first conducted under-the-radar beginning in 2012 and now occur on a regular basis within the context of the P5+1 nuclear talks — have led to a reduction in tensions, making the idea of U.S.-Iran coordination to counter ISIS a real possibility.

U.S. and Iranian officials have confirmed that they have been discussing ISIS on the sidelines of the nuclear talks over past months. The relatively smooth transition in leadership from Nouri al-Maliki to Haidar al-Abadi, coupled with Tehran’s muted response to American air strikes on ISIS in Iraq, suggests that at least some coordination between Washington and Tehran has already occurred.

Working with an “adversary” that supports other groups employing terrorist tactics will not be easy. But current and emerging circumstances in the region, including the rise of ISIS, demand Washington’s full exploration of  cooperation with Tehran on carefully selected shared objectives. As shared interests go, degrading ISIS is as compelling as they come.

As I’m writing this, it’s one of those improbably mild days, like a cosmic gift in what is usually the armpit of the summer.  And all I can think is that it reminds me of the weather on 9/11.

Now, maybe I internalized that day to an unusual degree, but I hope all Americans did to some degree. Because it’s not realistic to think we can hunker down inside our own borders, nor that we can deal with global challenges unilaterally.

So, yes, of course ISIL is our problem and of course we can’t solve it alone.

No nation can stand alone in this age of mobility – of money, words, people, and weapons. That means we need a mix of formal coalitions, pop-up partnerships, nations acting on their own, and even involuntary cooperation (including forgiveness rather than permission for crossing airspace). That’s a matter of efficacy, but also just of resources. The United States lacks the assets to be all things to all threats, and we don’t have the luxury of choosing whether to deal with Ebola or ISIS. Both can come home to roost.

Will other nations, in turn, be willing to help?  Yes. Maybe not always when we want or in the ways we want. Sometimes it will be below the waterline or involve distasteful compromises. But it will happen. It is happening.

What worries me more is that all the cooperation and support in the world isn’t going to be enough if we have none here at home. And I’m a lot less sure about that.

The swift and brutal rise of ISIS should provide two lessons for the U.S. and our allies: First – no matter now much we want it – there is no easy exit from the Middle East. Second, if the U.S. doesn’t engage responsibly, the results are rarely good.

The battles to defeat or more likely contain ISIL will have to be fought on the ground by Iraqis, Kurds, Syrians and others. They need support—airstrikes, intelligence, weapons, training, and goading toward political settlements. But if Washington is the only one providing that support and doing that goading it will feed the extremists’ narrative and popular resentments in the region and here.

Is the international community willing to step up? Some European leaders get the danger. We were all horrified by the videotaped execution of James Foley, but the fact that the masked jihadi wielding the knife spoke with a British accent had to be especially searing for the Brits. Whatever the Europeans will be willing to do, it will be a lot less than the U.S. And so far it’s not clear how much President Obama is willing to do.

An even more difficult question is how much support the U.S. can expect from regional players given the many rivalries and competing interests. The most cynical move so far (it won’t be the last) was the suggestion by Damascus that the U.S. and Syria coordinate air strikes against ISIS. As laughable as that sounds, the U.S. is going to have to figure out how to weaken ISIS without strengthening Bashar al-Assad. It is going to be hard. But we have already seen what happens when this country doesn’t act.