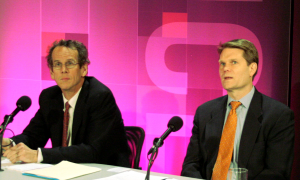 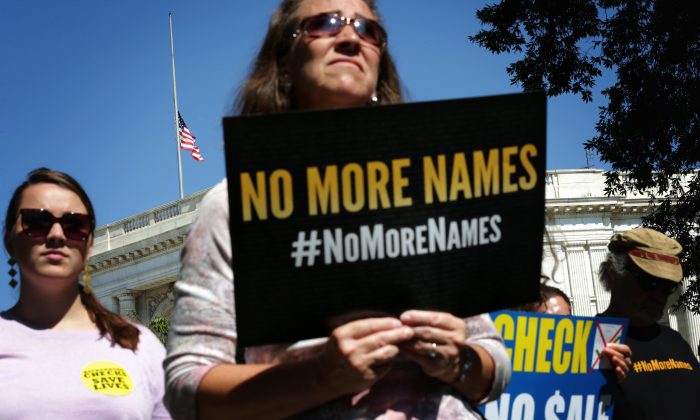 A flag flies at half-staff atop Russell Senate Office Building for the victims of the Washington Navy Yard shooting as gun control supporters attend a news conference in Washington, Sept. 19, 2013. (Alex Wong/Getty Images)
US

A New Approach to Dealing with Gun Violence

A paradox of mass shootings is that few people with mental illness are violent, yet those who are violent have caused tragedies.

Though federal changes in gun laws have stalled in Congress, states can effectively address the issue of mental illness and gun violence, according to a new study by public health and mental health experts.

The Consortium for Risk-Based Firearm Policy, which included Drs. Shannon Frattaroli and Emma (Beth) McGinty of the Johns Hopkins Center for Gun Policy and Research, released a report on Dec. 2 that looks at the links between guns, public health, and mental illness.

Nevertheless, the discussions increase the stigma against mentally ill people. Current federal law is not preventing mass shootings. According to McGinty, in the crimes her consortium studied, the shooters “did not have a federal firearm disqualification at the time of the crime.” She said to focus only on a diagnosis of mental illness is both unfair and ineffective in reducing violence.

It is nearly impossible to predict whether any one individual is likely to be violent, according to McGinty. It is possible and effective to predict and prevent violent behavior in the aggregate.

“I think the key that we focus on in our report is that gun prohibition should be based on dangerous behavior,” said McGinty.

The study recommends that people who have been involuntarily committed for psychiatric treatment should temporarily not be allowed to have guns. There is a window of time around such a hospitalization when violence is more likely.

Because alcohol and drug abuse increase the chance of violent behavior, people with more than one DUI or drug conviction in a certain time period should be restricted from having guns. States should restrict gun rights for people with domestic violence restraining orders, and violent misdemeanor convictions.

There should be a legal way for police to take guns from a person in an emergency, even without a warrant, the report recommends.

The study also recommends that states should create a mechanism to allow family members to ask police to temporarily confiscate the weapons of a person deemed a danger to himself or to others. With current laws, if no crime has been committed, police cannot intervene.

State law should include a way for the person to petition the court to get his guns back after a certain amount of time, and a way to store the guns safely until that time, according to the report.

The original purpose of the consortium was to get public health experts and mental health advocates talking to each other, according to McGinty. Generally, one side is concerned with the rights of mentally ill people and the other with threats to public safety, she said. It not only got the two sides talking, it led to evidence-based ways to prevent violence.