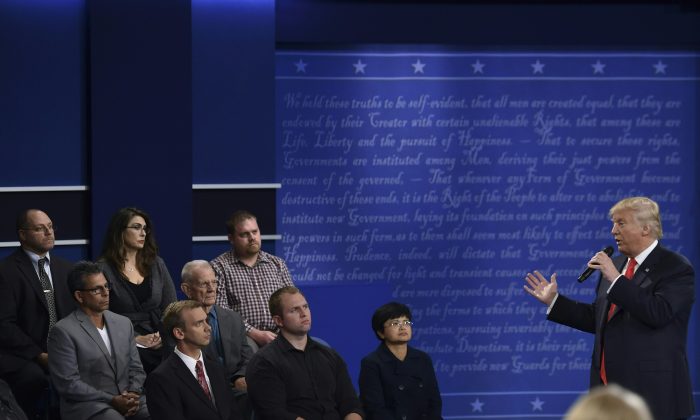 A New American From China Sees Democracy Up Close

Three months ago, I did a phone survey with the Gallup poll, and about 10 days before the second presidential debate they called me back. It was lucky I picked up—originally, I had been ignoring the barrage of calls from an “unknown number.” Informed of my invitation to be one of 40 uncommitted voters present at the debate, I decided quickly.

Taking the one-in-a-million offer to attend the debate on Sunday, Oct. 9, at Washington University in St. Louis, and the chance to raise questions to the aspiring U.S. leaders, was as surreal as it was enlightening.

I was excited to see the center of the democratic process, which I had never experienced before I came to the United States from China in 2007. I became a citizen two years ago and am now eligible to vote.

Do the Debates Help Us Choose Wisely?

The name-calling and personal attacks dominating the first part of the debate had me slightly disappointed. I had hoped for more discussion of specific policies and issues—things that in China would be decided by the Communist Party behind closed doors in Beijing.

In China, politics is seen as a game for the elites, something that has nothing to do with regular people. China’s state media singles out the heated rhetoric and sometimes obscene remarks in this electoral season and holds them up as evidence that America’s political system is chaotic and ridiculous—and that a one-party dictatorship is the superior alternative.

As a researcher of infectious diseases and immunology at St. Louis University, engagement in civic life hasn’t traditionally been the focus of my attention. When I arrived from China, democracy was far from my mind. To most Chinese, life goes on, after all—and it makes one wonder whether democracy is an essential prerequisite for freedom or justice. It was only slowly that I came to appreciate that the freedoms my husband and I now enjoy are bound up with the political process.

Part of my excitement that Sunday stemmed from the chance to query the candidates about human rights in China.

I wanted to know what the candidates made of the fact that many Chinese products are made by prisoners of conscience. How would they deal with this, given that the United States is China’s biggest trading partner?

Though it wasn’t drawn, this question is extremely important both for me personally and for the Chinese people. My husband and I practice Falun Gong, a traditional spiritual discipline that is persecuted in China. My husband suffered tremendously for this. A university professor and a scientist, he was thrown into a detention center and tortured by the authorities in 2001.

Such a crime could occur in flagrant violation of our basic legal rights because China is not a nation ruled by law but by the Communist Party, which was neither chosen by nor is accountable to the Chinese people.

To see the brutal treatment visited upon my husband and millions of other practitioners of Falun Gong, and compare it to the open, transparent discussions that go on in the United States, I think there is no question about which system is better. The constitutions of both China and the United States guarantee the inalienable rights to freedom of expression and belief. Yet only in one of these countries is this right actually enforced.

I look forward to the final leg of the electoral process, and hope that some of my concerns might be addressed. For our fellow Falun Gong practitioners still in China, who have no opportunity to be heard, the least we can do is give them a voice.

Yuan Jinyun is a researcher in infectious diseases and immunology at St. Louis University and recently became a U.S. citizen. She is looking forward to her first opportunity to vote in a presidential election.

Trump Says His Own Party Being ‘Naive’ About Voter Fraud