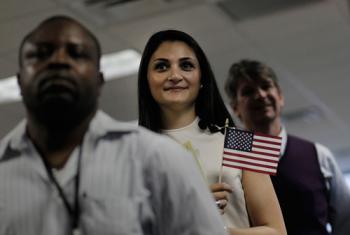 “Now, I strongly believe that we should take on, once and for all, the issue of illegal immigration,” President Obama stated. “And I am prepared to work with Republicans and Democrats to protect our borders, enforce our laws, and address the millions of undocumented workers who are now living in the shadows.”

Despite the declaration of cooperation, there are certain differences between Democratic and Republican approaches to immigration reform.

Republicans are certainly aware of the populist groundswell that brought them to power in the House. Whether due to principle or the desire to stay in power, they will be careful in aligning themselves with any proposals by the president, and even more so by Senate Democrats.

In December, the Democrat's Dream Act, which provided paths to citizenship for those who were under the age of 16 when they entered the country illegally but lacked repercussions for the initial illegal entry by their parents, was defeated in the Senate by Republicans and Democrats.

Regarding political approaches, Democrats mindful of their support from Latino constituents have focused on amnesty provisions for illegal immigrants, with conservative Republicans proponents of border security and enforcement of existing immigration laws.

Recognizing the will of the voters, the tougher approach to illegal immigration has crossed party lines. Hard economic times and mounting state deficits have created common ground for passage and enforcement of stiffer immigration laws. And while Washington is mired in the politics of immigration reform, some states are not waiting for the federal government to act.

Arizona-style immigration bills are popping up in state legislatures. Mississippi's state House passed a bill that included provisions to let police officers check for immigration status during certain conditions. The state Senate passed a similar proposal the week before, and the two versions will now be reconciled.

Proposals are also being forwarded in the Georgia state Legislature calling on employers to require proof of residency, and allowing immigration status checks during traffic stops.

Cosponsor of The Illegal Immigration Reform and Enforcement Act, Republican state Rep. Kevin Cooke, says the burden on state coffers by illegal immigration amounts to nearly $1 billion dollars a year, and the solution is found in enforcement of the law.

“We’re a country based on laws and not of men so we have to enforce the law,” Rep. Cooke stated, as quoted by the Times-Georgian. “The federal government is not doing their job at all so it’s left up to the state to take matters into their own hands and take care of the problem.”

The Washington Examiner reported Monday that Virginia and Maryland communities cracking down on immigration violations have seen a significant drop in illegal immigrants.

Similar proposals are emerging in the state governments of Florida and Indiana. The collective attitude in all of these examples is one of not wanting to wait for the federal government to act on illegal immigration, but to deal with the issue at a state level.

A legal immigration process requires some knowledge and assimilation to these principles.

In a country founded by immigrants, this heritage is not bound to race or ethnicity, but is an important historical lesson on the unique role our country and its people have played in this world.