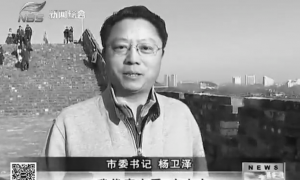 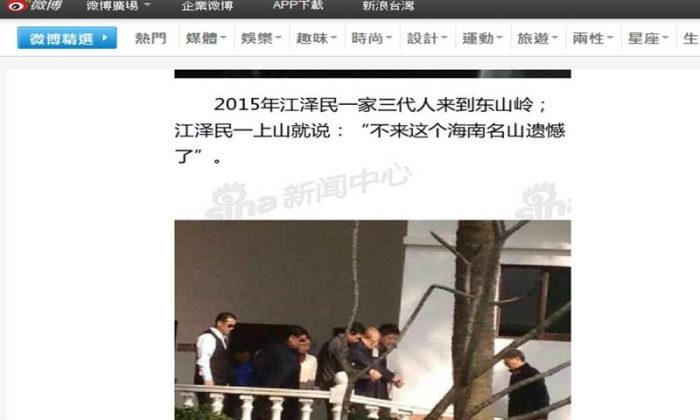 News of former Chinese Communist Party head Jiang Zemin taking a stroll through the mountains of Hainan were deleted by Internet censors on Jan. 3. The move is an indication that Jiang is being further marginalized politically. (Screenshot/Sina.com)
China

The former paramount leader of China, Jiang Zemin, is notorious both in and out of office for coveting media attention. Recently, he took a jaunt through a mountain range in southern China with his son and grandson in tow—basic fodder for Chinese political reports, and, as these appearances often are, laced with political meaning: “Hello—I’m still around,” the appearance seemed to say.

Except it didn’t say that at all, because all references to the reports were quickly purged from the Internet. A search of Baidu, China’s largest search engine, for the terms “Jiang family climbs Hainan’s Dongshan ridge” shows reports from the usual major Chinese web portals: Sina, Phoenix, Hexun, Sohu, and more. But attempts to visit the sites show deleted pages.

In China, where the appearances of former leaders in the press are a political negotiation, the fact that the reports vanished speaks volumes—an indication that Jiang, who wielded enormous influence over Chinese politics for years after his formal withdrawal in 2004, is being further politically marginalized by Xi Jinping, the current leader.

“Jiang’s appearance… is an attempt to flaunt his status and show that he still has political influence,” said Xia Xiaoqiang, a political commentator, in an interview. “It’s a challenge to Xi Jinping.”

In China, First ‘Tiger’ of 2015 Goes Down in Anti-Corruption Campaign

Xia noted that many of the takedowns of powerful Chinese officials by Party leader Xi Jinping have been associated with Jiang Zemin’s political clique, including Zhou Yongkang, the former security czar, and Xu Caihou, formerly a top military commander.

“His appearance indicates that the struggle has intensified and comes into the open—this could force Xi Jinping to make more overt moves against Jiang and his group,” Xia said. But Jiang’s inability to even make a showing in the media also demonstrates a loss of influence, Xia said.

The timing of Jiang’s stroll through the mountains is also noteworthy. It came just days after a deadly stampede left three dozen dead in Shanghai, the bastion city of the former leader. Jiang served as a top official in the municipality for years, and his unofficial network, well-known for its nepotism, is known to the public as the Shanghai clique or the Shanghai faction.

The mayor of Shanghai and the city’s Party Secretary, both aligned with Jiang, are under scrutiny for the deadly incident. The public has been frustrated by the lack of a clear and comprehensive explanation about how the stampede was able to kill so many people, and the public has attacked the local government as incompetent. Some have even called for Party Secretary Han Zheng and mayor Yang Xiong to step down. Even regime mouthpiece Xinhua published a report reprimanding the Shanghai authorities for failing to prevent the disaster. Family members have knelt for hours outside hospitals, crying and begging to be allowed to see the bodies of their deceased family members.

Jiang, casting his eyes over the scenery on Dongshan ridge, seemed oblivious to all those concerns. As he took in the vista, he reportedly told Hainan Party Secretary Luo Baoming: “Such good scenic views in Hainan must be enthusiastically publicized. When I go back to Beijing, I will put put in a good word for you all.” The reports, before they were deleted, showed a photo of the 88-year-old Jiang tottering across a pagoda, steadied by two men holding his arms.