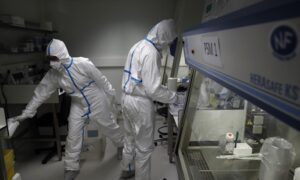 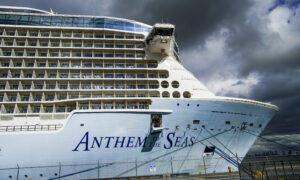 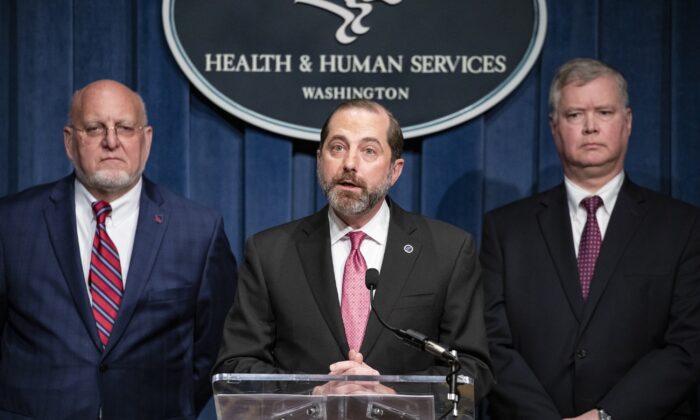 Health and Human Services Secretary Alex Azar speaks during a press conference on recent developments with the coronavirus with other members of President Trump's Coronavirus Task Force at the agency's headquarters in Washington on Feb. 7, 2020. (Samuel Corum/Getty Images)
AMERICA

A Month Later, China Hasn’t Let US Experts Into Country to Help With Coronavirus Outbreak

China’s leadership has let a month elapse without letting U.S. experts into the country to help study the outbreak of a new coronavirus, Secretary of Health and Human Services Alex Azar said.

“At this point, it’s really a decision for the Chinese,” Azar said at a press conference in Washington on Feb. 7. “We are ready, willing, and able. We are here to support the Chinese government, to help China with their response.”

The virus, known as 2019-nCoV, broke out in Wuhan in December 2019. Dr. Robert Redfield, director of the Centers for Disease Control and Prevention, made the first offer on Jan. 6. Azar reiterated the offer to his counterpart, China’s minister of health, on Jan. 27. The next day, World Health Organization (WHO) Director-General Tedros Adhanom Ghebreyesus, met with Chinese leader Xi Jinping and secured Xi’s agreement on allowing a WHO team to travel to China.

That agreement was announced by the White House earlier this week.

Thirteen of the 25 possible team members were American experts from the CDC, the National Institutes of Health, and Biomedical Advanced Research and Development Authority, an office at Azar’s department. The names included virologists, drug development experts, and epidemiologists. Their primary role would be to learn more about the nature of the virus.

“Our longstanding offer to send experts to China remains on the table,” he said.

“Our scientists and public health experts are trying to learn more about the virus using the data we have from China and the cases we have. In the very near future, we hope they are able to work with their Chinese counterparts and other international experts on the ground in China.”

Multiple reporters questioned him about possible motives for not accepting the offer and whether American officials trust the numbers that China has been releasing. Azar said U.S. officials are “optimistic” that China would ultimately accept the offer, noting that the Chinese Communist Party, which is a dictatorship, has a government that works differently than the U.S. government.

If American experts can get on the ground in China, Azar said, they could add expertise in attempting to puzzle out the continuing uncertainties surrounding the virus, including the incubation period, whether it transmits symptomatically, and the severity index.

Dr. Robert Redfield, director of the Centers for Disease Control and Prevention (CDC), said the United States has confidence in China’s CDC but believes the numbers from the Chinese authorities don’t capture the true number of infected there due to the fact that asymptomatic transmission is happening.

International and national health officials have repeatedly said there’s a lot they don’t know about the virus, including its origins. “We don’t know the source of the outbreak, we don’t know what its natural reservoir is, and we don’t properly understand its transmissibility or severity,” Tedros said this week. “To put it bluntly, we’re shadow boxing.”