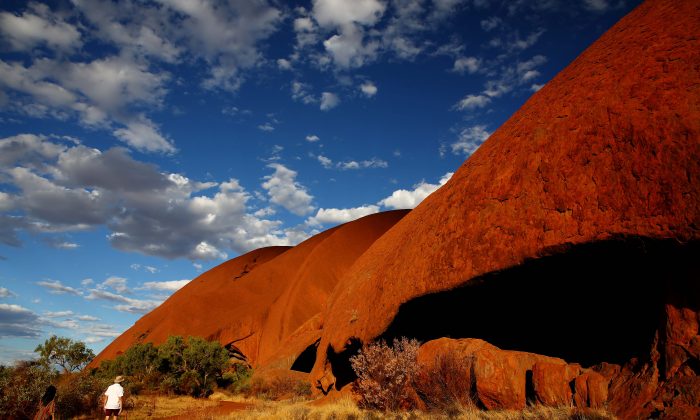 Visitors walk around the base of Uluru on the base walk trail on Nov. 27, 2013 in Uluru-Kata Tjuta National Park, Australia. Uluru/ Ayers Rock is a large sandstone formation situated in central Australia approximately 335km from Alice Springs. The site and its surrounding area is scared to the Anangu people, the Indigenous people of this area and is visited by over 250,000 people each year. (Photo by Mark Kolbe/Getty Images)
Australia

A Momentous Win For The Indigenous Anangu People of Australia

A historic decision to ban tourists from climbing Uluru (Ayres Rock) in Australia—an activity considered disrespectful by its traditional owners—was announced on November 1.

The Uluru-Kata Tjuta National Park board, made up of a majority of Aboriginal traditional owners, unanimously voted to ban climbers from the popular Australian tourist attraction from Oct. 26, 2019.

This decision to end the climb seemed to be a natural progression of events, with the number of visitors actively scaling the national icon has in recent times fallen below the 20 per cent threshold stated in the Park’s management plan.

Between 2011 and 2015, only 16 percent of visitors made the climb, according to the latest figures.

Uluru traditional owner and board chairman Sammy Wilson said the decision should be something to be proud of.

“This decision is for both Anangu (the traditional owners) and non-Anangu together to feel proud about; to realise, of course it’s the right thing to close it,” Wilson said in a media statement on Nov. 1.

“Closing the climb is not something to feel upset about but a cause for celebration.”

Uluru is regarded sacred to the Anangu people who have strongly discouraged tourists from scaling the rock for many years.

According to news.com.au, 35 people have died while climbing across Uluru since it started getting visitors in the 1950s.

“It is an extremely important place, not a playground or theme park like Disneyland,” Wilson said.

“If I travel to another country and there is a sacred site, an area of restricted access, I don’t enter or climb it, I respect it. It is the same here for Anangu,” he added.