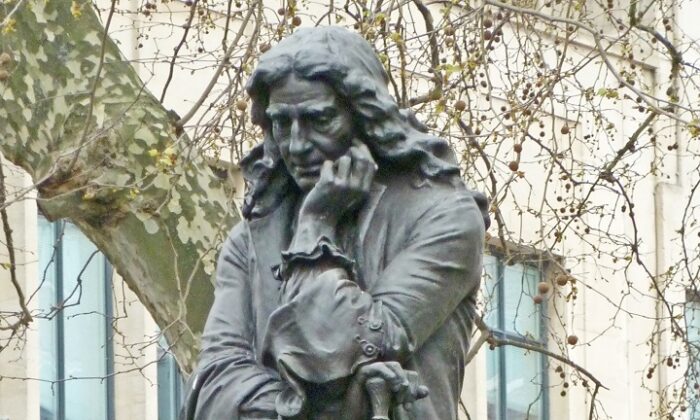 A statue of Edward Colston, slave trader and philanthropist, in Bristol, England, on March 31, 2012. (Tim Green via Wikimedia Commons/CC BY 2.0)
Viewpoints

In the wake of what I am inclined to call Black Lives Matter Madness (BLMM), a self-righteous mob in the city of Bristol, England, toppled a statue of Edward Colston and threw it into the waters of the River Avon.

That the 125-year-old statue was an aesthetic adornment to the city at a time when such adornments are completely beyond the capacity of all but one or two of our sculptors counted for nothing in the mind of the mob, infatuated as it was by its own bravery and moral grandeur.

Edward Colston (1636–1721) was a merchant and philanthropist who used much of his fortune to endow schools, hospitals, and almshouses for the poor (of considerable architectural merit). He also was a slave trader, albeit at a time when slavery was approved of morally by almost the whole of the educated class and could be carried out only with the cooperation of African slave-hunters, Europeans being unable at the time to penetrate Africa beyond a few coastal stations.

Four members of the mob who toppled the statue were arrested and charged with criminal damage. They’ve just been acquitted of the charge by a jury, though it was at no time denied by the defense that they had committed the acts of which they were accused.

There was no suggestion that the police had fabricated the evidence against them. They were acquitted (naturally to their own rejoicing) on the grounds that they were acting morally—that they were motivated by a desire for historical justice. Their defense attorneys told the jury that the four people were “on the right side of history”—as Colston had believed himself to be more than three centuries earlier.

A Labour Member of Parliament rejoiced at the verdict almost as much as did the accused.

“A British jury has confirmed the toppling of Edward Colston’s statue was not a criminal act,” the Parliament member said. “The real crime was the fact the statue was still there when protesters pulled it down. Today’s verdict makes a compelling case that the majority of the British public want to deal with our colonial and slave-trading past.”

Let’s pass over the fact that a single jury of 12 (of whom one voted for conviction) can’t be taken to represent the majority of a population of scores of millions and that a different jury might have found differently. What’s remarkable about the MP’s response is that it doesn’t consider the implications of the verdict if it were to set a precedent.

It would mean that acts normally considered criminal would cease to be so provided that those who committed them were “on the right side of history” and were motivated by what they claimed to be profound moral sentiments (but which are actually very superficial indeed).

Upon reading of the acquittal, I couldn’t help but think of the attempted assassination of Gen. Dmitri Trepov by Vera Zasulich in 1878. Trepov, the governor of St. Petersburg, Russia, had ordered the flogging of prisoner Arkhip Bogolyubov, a revolutionary, after the latter refused to remove his cap in Trepov’s presence. Zasulich, herself a revolutionary, shot and wounded—but didn’t kill—Trepov in an act of revenge.

Zasulich, who was motivated by moral outrage, was subsequently acquitted at her trial, which was turned into a de facto trial of the victim, Trepov, by the defense.

At the time, the acquittal was seen, at least by the intelligentsia, as a triumph for social justice: Trepov had got what he deserved and Zasulich was a heroine. But in retrospect, the acquittal was disastrous, for it surely wasn’t up to citizens to decide who could rightfully be shot, and there was no doubt as to the facts of this case, which were even more certain than they were in the Bristol case.

The verdict in a court of law had undermined or was in complete contradiction to the concept of the rule of law or even of the need for law at all. If citizens could carry out acts of revenge with impunity in the name of justice, what need would there be for such cumbersome procedures as trials?

But as Francis Bacon, attorney and philosopher put it four centuries ago: “Revenge is a kind of wild justice, which the more man’s nature runs to, the more ought law to weed it out.

“For as for the first wrong, it doth but offend the law; but the revenge of that wrong, putteth the law out of office.”

In other words, if every man can break the law when he feels so inclined by his sense of outrage, no law remains.

The Zasulich acquittal was a stage on the slippery slope to Bolshevism, responsible for more violent deaths in a week than the Tsarist regime had caused in a century.

While the statue of Colston was being pulled down, statues of George Floyd were being erected. This was surely very curious. Floyd’s moral qualities as a person shouldn’t be relevant to the question of the wrongfulness of his death, of course, as it’s just as wrong to kill a bad person as a good. But they should be relevant to how he’s remembered.

Floyd was guilty of many crimes, at least one of them being very nasty indeed. He threatened a pregnant woman (black, incidentally) whose house he had broken into with a gun. Erecting a statue to such a man could be interpreted as both the glorification of armed robbery and the grossest of misogyny.

It seems obvious to me that no statue should be erected to him. Victimhood is no virtue and can’t redeem a crime. To erect statues to him is nothing short of disgraceful and to turn him into a hero is—or ought to be considered—an insult to black people everywhere.

However, feeling as I do about this doesn’t entitle me to pull the statues down where they’ve been erected legally. I can argue against them, campaign and start petitions for their removal, and so forth, but I can’t take the law into my own hands.