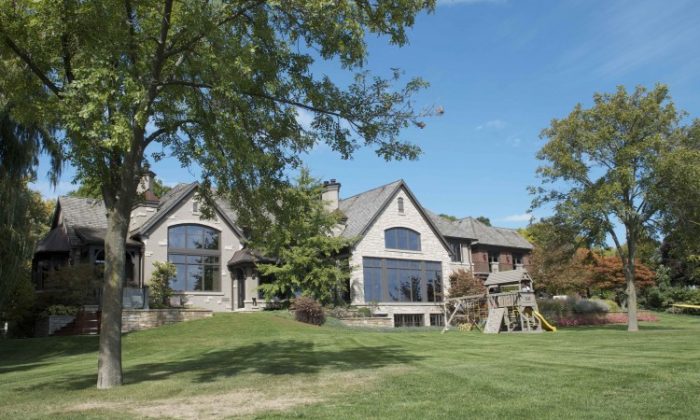 Owner Tim Degroote (L) and sales representative Christopher Invidiata (R) stand in the family room of the rare waterfront estate that was put on sale by Degroote this Saturday. (Kristina Skorbach/ The Epoch Times)
Canada

A Millionaire’s Retreat Goes on Sale

BURLINGTON, Ontario—On a quiet and cozy street along the shores of the Burlington Bay at the westernmost point of Lake Ontario, rests a generous and rare lot that’s now on the lookout for a worthy millionaire.

The waterfront estate at 140 Oaklands Park Court in Burlington is the brainchild of Tim DeGroote, a wealthy entrepreneur who made his fortune in the land development business. Built in the early 2000s, the waterfront estate went up for sale Saturday.

DeGroote bought two adjacent lots and tore down the houses to build his mansion, complete with an indoor swimming pool, solarium, and six bedrooms—each equipped with its own ensuite. The house is just under 16,000 square feet and its waterside land includes a small playground, private marina, and a mini putt in the backyard. The price tag, just under $8 million.

Although every part of the house is special for DeGroote—it was designed by him after all—the floor-to-ceiling windows in the family room are a favourite.

“Every room here has got a pretty good view,” he said, walking around the house barefoot.

“They use to call it the Golden Coast,” he noted, referring to the evening view of all the lights along the opposite shore.

Outside, a helicopter owned by his nephew sits at one end of the dock, a reminder of how the wealthy can commute from Bay Street to Burlington without the muss and fuss of rush-hour traffic.

The view out the windows is an urban one with downtown Hamilton and the Hamilton Steel Mills in front and a bridge marking the far left.

“I love being on this side of the bridge, because I’m able to have whatever boat I want here,” Degroote explains. Other than driving around in his boats, DeGroote also enjoys watching the sail boats out in the water.

“Down here, your noise is the water,” he said.

His house is one of the only two waterfront properties at Burlington Bay to have a private marina. The other house, just down the shore, belongs to billionaire Ron Joyce, the founder of Tim Hortons.

DeGroote’s waterfront estate is plenty accessible. You can reach it by car, as highways 403 and the QEW are just at the next intersection. You can also take a boat to the place, or you can arrive in style by waterplane, or helicopter.

“To me it’s so close yet so far from everything … it’s a quiet, hidden corner,” DeGroote described his fortress.

So why would one need a house with a marina and six bedrooms, one might ask.

“The luxury market is only based on ‘want,'” said real estate representative Christopher Invidiata with The Invidiata Team RE/MAX Aboutowne Realty Corp. Brokerage. Invidiata has specialized in luxury real estate for over two decades.

To those who can afford it, a private marina and the excellent amenities of the estate offer a peaceful retreat that makes working hard at the office pay off.

The neighbourhood seems pretty friendly too. According to DeGroote, the whole street throws a party at least once a year, typically at Christmas time.

DeGroote said he hasn’t made any plans for his next move, but he wants to stay in the Burlington area. When he’s not in Burlington, he spends time on a farm in Collingwood, a small town along the shores of Georgian Bay.

“Now thinking that far ahead now … I’d rather sell first, and then go find a new green,” he said.