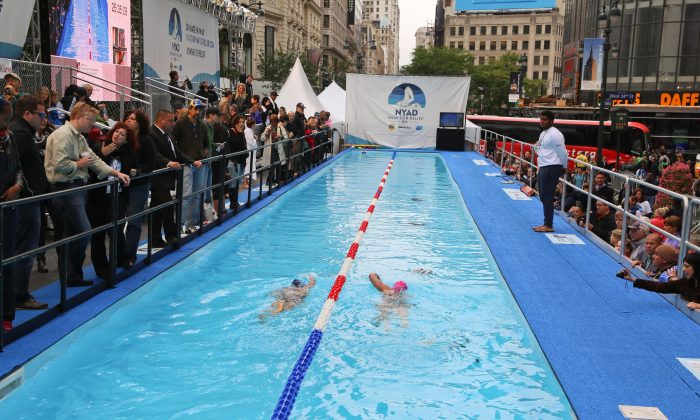 At 64, Nyad raises funds with a 48-hour swim at Herald Square
By Kristina Skorbach

NEW YORK—Diana Nyad, a famous long-distance swimmer, embarked on a 48-hour continuous swim in a temporary pool in Herald Square on Oct 8. A day later, she was still going strong.

While taking a breather, Nyad said she had stomach problems the night before, but that her team helped her push through.

A screen hung above the pool showing a live recording and the time, 25 hours and 40 minutes, that Nyad spent swimming. Nyad said that the clock is moving too slowly, but that she wasn’t feeling too tired.

The 120-foot custom-made pool was installed for the event in the middle of Manhattan’s Herald Square.

Nyad is a native New Yorker, best known for becoming the first person to swim shark-cage-free through the Gulf of Mexico from Havana, the capital of Cuba, to Key West, the southernmost island in the Straits of Florida. The 64-year-old completed the 103-mile stretch this September.

During her three-minute stops in the pool, a female staff member fed Nyad egg salad and peanut butter and honey sandwiches. Another let her drink from a tube attached to a bag of liquid filled with a concoction of electrolytes, ginger, and digestive stomach formula. Every time Nyad pulled up from the pool, she revealed white, wrinkled fingers and her bloodshot right eye.

Nyad is swimming for Hurricane Sandy victims who had their homes destroyed almost a year ago.

“It’s a year later, thousands of people are still homeless, we can’t forget these people just because it’s not on the front pages anymore,” Nyad said.

A crowd of supporters cheered Nyad on every time she took off after a stop, and every time she was joined by a volunteer in the pool. They applauded and shouted, “Go, Diana!”

“You can see the crowds. They’re feeling it too,” Nyad said.

At the 27-hour mark several caretakers of the pool used a long vacuum to clean the pool water. The standard of pool maintenance is the same as that in the Olympics.

Nyad is expected to complete her swim on Thursday at 8:40 a.m.

The pool had two lanes: one for Nyad and the other for any celebrities, officials, or supporters. Fitness personality Richard Simmons, broadcast journalist Natalie Morales-Rhodes, and actor Joe Manganiello supported Nyad by going in the pool for a lap or two.

Those who swam were then invited to a hot shower set up behind the event screen and offered white, plush, branded robes as they watched Nyad continue swimming.

Estelle Young, a 67-year old physician and a frequent swimmer, swam a lap with Nyad. She called the experience “one of the happiest days of my life.”

“Never in my wildest imagination could I imagine swimming in Herald Square, or with Diana Nyad,” Young said, shivering. “Diana is doing an effort, not just for one person, but for the whole world.”