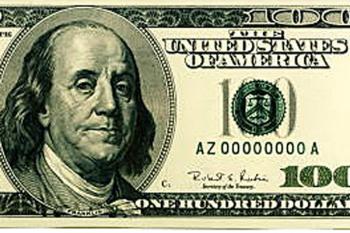 In 1996, the U.S. $100 currency series incorporated new features designed to improve the security of the currency. The new design retained the beloved image of Benjamin Franklin. (Newsmakers)
Opinion

A Man of Character: Benjamin Franklin

Sharon Kilarski
biggersmaller
Print
It’s common knowledge that Benjamin Franklin helped draft the Declaration of Independence and was sent as a diplomat to France to ask for assistance during the Revolutionary War. He was a Renaissance man who assumed the roles of a newspaper writer/printer, an author, a scientist and inventor (of bifocals and the lightning rod, among others), and a politician and diplomat. He is credited with starting America’s first public lending library and fire department—and his face still meets us whenever we are lucky enough to glimpse a $100 bill.

Less commonly known, perhaps, is that Franklin tried to live by the aphorisms that seem so glib today.

In “The True Story of Benjamin Franklin,” author Lee Lothrop relates a story from Franklin’s childhood. When Franklin was a boy, he and his friends decided one day that in order to catch minnows they needed to build a wharf. They found a convenient pile of stones and hauled them to the marsh where the boys usually fished, and soon, with a good deal of effort, they put together a fishing wharf.

Unfortunately, the stones had been intended for the cellar of a new house, and since building the wharf was Ben’s idea, he was punished. Ben argued with his father that since the stones were there and a wharf needed, he had done no wrong. He did not convince his father: “The stones were not yours to take, Ben,” said his father. “What is not honest cannot be truly useful.”

This incident helped frame his famous aphorism, “Honest is the best policy.” This phrase did not come easily off the tongue, but served as one of Franklin’s guiding principles for his life.

At the age of 20, he resolved to adopt 13 virtues which he followed faithfully:

"Temperance. Eat not to dulness. Drink not to elevation."

"Silence. Speak not but what may benefit others or yourself. Avoid trifling conversation."

"Order. Let all your Things have their Places. Let each part of your Business have its Time."

"Resolution. Resolve to perform what you ought. Perform without fail what you resolve."

"Frugality. Make no Expense but to do good to others or yourself: i.e., Waste nothing."

"Industry. Lose no time. Be always employ'd in something useful. Cut off all unnecessary Actions."

"Sincerity. Use no hurtful deceit. Think innocently and justly, and, if you speak; speak accordingly."

"Justice. Wrong none, by doing injuries or omitting the Benefits that are your Duty."

"Moderation. Avoid Extremes. Forbear resenting Injuries so much as you think they deserve."

"Cleanliness. Tolerate no Uncleanness in Body, Cloaths, or Habitation."

"Tranquillity. Be not disturbed at Trifles, or at Accidents common or unavoidable."

"Chastity. Rarely use Venery but for Health or Offspring, never to Dulness, Weakness, or the Injury of your own or another's Peace or Reputation."

Ben Franklin carried his practical philosophy into all his ventures, even politics, where he was deeply concerned with corruption and virtue. He believed that our republic could only survive if people did away with corruption and held on to good moral ethics and attended to civic duty. Nevertheless, he understood that few were able to meet this high standard, as he observed: “Men primarily consider’d that their own and their Country’s Interests were united, and did not act from a Principle of Benevolence.”