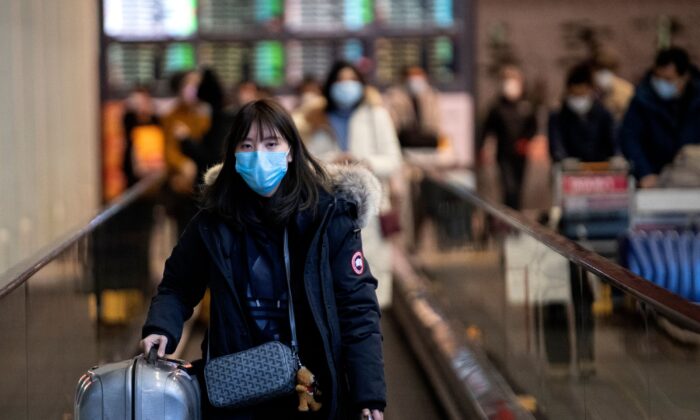 A passenger wearing a protective facemask arrives at the Beijing Capital International Airport in Beijing on Feb. 2, 2020. (Noel Celis/AFP via Getty Images)
By Eva Fu

Chen knew all too well the dangers lurking on the other side of the globe, but hopped on the plane anyway.

There was no other option to rescue her mother, who lives in the Chinese city of Wuhan—ground zero of a virulent outbreak that has prompted a global health emergency.

International airlines are now halting flights to China, while international brands such as Apple and Starbucks are closing their Chinese branches. Around a dozen countries, including the United States, have barred entry to travelers who have recently been to China.

On Jan. 18, Chen’s mother began exhibiting symptoms similar to the coronavirus that has spread all over China and dozens of countries.

Her condition was deteriorating by the day.

For 10 days, her mother tried to seek medical help, but everywhere she went, hospitals turned her away due to the lack of beds.

Chen’s family wasn’t alone: According to Wuhan’s mayor, as of Jan. 26, the city has utilized 24 hospitals and a total of 100,000 beds to cope with the growing number of suspected patients. Authorities are also constructing two additional emergency hospitals to handle coronavirus patients.

The Epoch Times spoke to many Wuhan residents who, like Chen’s mother, were turned away at the hospital and not diagnosed with the coronavirus. Their stories indicate that authorities have been underreporting the number of infections by failing to diagnose patients.

At the time, Chen was in England, visiting on a tourist visa.

“I really couldn’t bear the thought of losing my mom,” Chen told The Epoch Times.

One time, around midnight, her parents gave up waiting at a hospital after learning that there were more than 1,000 patients ahead of them, all with feverish symptoms.

On another occasion, they walked miles to the Hankou hospital. A doctor promised a bed by that evening. They went home and returned at night. They waited for 10 hours, only to be told at 5 a.m. that the space was no longer available.

“I wanted to stay by her side and take care of her,” Chen said.

It was a mission against all odds.

Her father, her brother who was with her in England at the time, and friends around her all objected to Chen’s decision.

There were no direct planes going in and out of Wuhan anymore. In the city, as well as the wider Hubei Province, some 60 million people had been placed under some form of quarantine.

Chen first flew to Vietnam, then to the southern Chinese city of Shenzhen, where she caught an express train that had a three-minute stopover in Wuhan. The police there helped her get home after she explained her parents’ plight. On Jan. 28 at noon, she returned to the home in Wuhan where she and her mother lived.

What greeted her was “a miserable sight,” according to Chen.

“My mom was sitting on the sofa with her eyes closed, spiritless,” she said.

‘She Would Have Died’

Chen wasted no time in mobilizing the network of people who could help her pull some strings. She tried every possible contact, to give her mother a better chance.

She called up hospitals and drove her mother from place to place, despite knowing she could be punished for violating a ban on private vehicles. She posted her story on social media, which garnered media attention.

That night, Chen’s mother’s lips turned purple. She had difficulty breathing and nearly fainted. Her blood oxygen saturation dropped to 40 percent. Chen raced her mother to the Hankou hospital.

Doctors issued a “critically ill” notice and performed an emergency operation on Chen’s mother for three hours. A CT scan revealed that 40 percent of her mother’s lungs were infected. A doctor told Chen her mother only had a 50 percent chance of survival. At 4 a.m., the operation procedure ended, and a hospital bed was secured for her mother.

Another doctor told them that he believed her mother had contracted the coronavirus, but he didn’t issue formal paperwork to diagnose her.

“If I hadn’t gone back home, she would have died,” Chen said.

On social media chat groups where Chen and other Chinese netizens share information about the virus, desperation permeates their conversations. There was someone who lost four of her five-member household to the virus; a single mother who fell sick together with her young son; and Chen’s colleague who was infected one month after having a baby.

A neighborhood committee officer in Chen’s residential area told Chen that her mother was “a lucky one,” as the hospital admitted her. Another 84-year-old man who fell critically ill at the same time couldn’t get a bed, he told her.

Chen’s friends and coworkers also told stories of family members getting sick. “A lot of people remained undiagnosed when they died. They were not hospitalized,” she said.

The entire city was in a dire state. “When I was driving my mom to the hospital, the entire street was empty,” she said.

“In the past, that would be the busiest, most crowded place—it was impossible to walk through … but now all you see is the [banner] about the disease.

The last time Chen spoke to The Epoch Times, she was at the hospital waiting for updates about her mother’s condition. The doctor said the situation was “very grave” and asked her to stay at the hospital. She said her mother could be gone at any time.

Authorities said that all who test positive for coronavirus are eligible for free medical treatment. But doctors simply told Chen that they didn’t have enough testing kits and couldn’t diagnose her mother.

Two of the country’s three official suppliers of coronavirus testing kits, Shanghai GeneoDx Biotech and Shanghai BioGerm Medical Biotechnology, said on Jan. 24 that they had the capacity to produce about 220,000 testing kits each day and that the kits should reach different regions within 24 hours, according to Chinese state media.

On Jan. 27, two biotech companies that developed their own testing kits donated 46,000 of them to Wuhan, according to Chinese media.

“All the government policies are a joke,” she said. “[They said,] ‘I will arrange free treatment for you,’ but when you actually look for them … the doctors won’t diagnose you. It’s just window dressing.”

A Jan. 29 study in the New England Journal of Medicine found that human-to-human transmission had occurred around early- to mid-December.

Authorities repeatedly claimed that the disease was containable and not contagious until Jan. 20—when Zhong Nanshan, the nation’s leading respiratory scientist, acknowledged that a patient had infected 14 medical workers.

On Jan. 3, Wuhan police issued warnings to eight local medical professionals for “spreading rumors” about the illness online. One of them, Dr. Li Wenliang, later contracted the virus while treating a patient. His parents also fell ill while caring for him.

The city’s mayor later blamed central authorities for withholding information about the disease.

A study published in The Lancet on Jan. 31 estimated that as many as 75,815 individuals in Wuhan could have been infected, with the number of infections likely to double every 6.4 days.

The illness has so far hit 26 territories outside of mainland China.

Citing a friend who works in local government, Chen said the total of suspected cases and infections is “definitely” more than 100,000.

“This is not a natural calamity; it’s a man-made disaster,” Chen said.