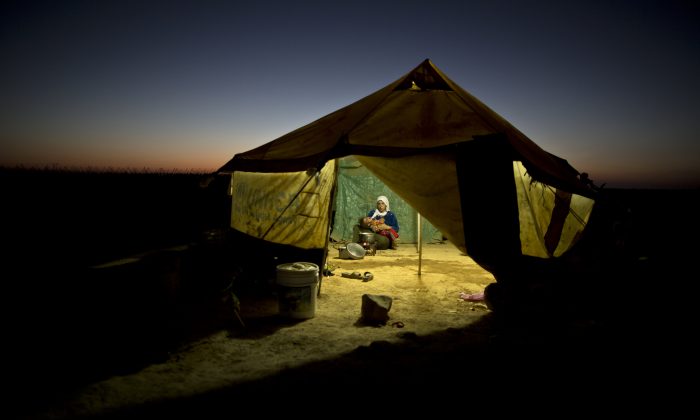 A Syrian refugee woman tends to her daughter while cooking inside her tent at an informal tented settlement near the Syrian border on the outskirts of Mafraq, Jordan, on Aug. 26, 2015. (AP Photo/Muhammed Muheisen)
Opinion

A Lost Generation: Where Have 4 Million Syrians Fled?

AMMAN, Jordan—According to United Nations figures, more than 4 million Syrians have fled their homeland, with another 7 million displaced internally within Syria.

To put this in perspective, the state of Oregon (27th most populous in the U.S.) has around 3.97 million residents.

Around 630,000 Syrian refugees now live in Jordan, both in refugee camps and in various towns and villages throughout the country.

Of those in Jordan, many have ended up within the Zaatari Refugee Camp in northeast Jordan.

The sprawling complex, which is three years old, is the largest refugee camp in the Middle East and is located just eight miles from the Syrian border.

The bustling Zaatari camp, made up of over 81,000 residents, borders the municipal district of Mafraq—a town now overflowing with Syrian refugees who either opted out of the camp or didn’t qualify for admission.

Zaatari is now the fourth largest city in Jordan. According to U.N. estimates, 84 percent of Syrians now live outside refugee camps.

Many children in the camp are becoming what analysts often refer to as the lost generation.

Some go to school, but many beg or work to provide for their families. During school hours, entrepreneurial young boys gather outside the camp’s grocery stores with wheelbarrows to transport groceries for a small fee of 19 to 50 cents (U.S. dollars).

Those strong enough help move caravan houses from registration areas to plots within de facto tribal areas. According to reports, some 3,000 children work in the Zaatari camp alone. Many young girls are forced to marry men in the camp or wealthy individuals outside the camp in places like Saudi Arabia to alleviate family expenses.

This additional pressure on children exists because many of the households in Zaatari are headed by women. Husbands remain in Syria to protect property or fight in the conflict, or else they have been killed.

Without a traditional breadwinner, many children must take on the role to keep the families alive, a situation that for many Syrians would have been unimaginable only five years ago.

Who Has Fled Syria?

Many of the refugees were from middle-income families and communities in Syria.

Doctors, lawyers, and engineers are now selling fruit and vegetables at illegal stands in Zaatari or in communities around northern Jordan. Around five percent of Zaatari’s residents were university students in Syria before coming to the camp.

While commerce is illegal in Zaatari, outside the sanctioned grocery stores that accept the food voucher credit system, a vibrant market street has emerged over the years known to camp residents as the “Champs-Élysées.”

US, Turkey Aim for ISIS-Free Zone in Northern Syria
Doctors and Patients Are Targets in Brutal Syrian War

Despite being illegal, the market is a testament to the Syrian resiliency in the camp to carve out a space of normalcy and purpose in an otherwise alternate universe for ordinary Syrians.

There are some 2,500 informal businesses in the camp, including a pizza delivery service, a travel agency, and even an appliance shop to buy washing machines and refrigerators.

Since its creation in 2012, many changes have taken place within the camp, including hard-walled caravan housing, mobile communications, and voucher-based food distribution.

Other more recent developments include the creation of additional permanent energy supply, sewage collection systems, and water sanitation and treatment.

Proper sewage collection is vital to limiting airborne and waterborne diseases that in turn drive up health care costs in Zaatari. Sewage collection systems are now being built to accommodate individual caravan households.

Water treatment also is critically important, because Zaatari sits directly atop one of the largest aquifers in water-poor Jordan.

These longer-term infrastructure projects indicate that both the Jordanian government and UNHCR see no change in the refugee situation as it relates to the conflict in the near term and increasingly in the long term.

Jordan is struggling to devote resources to the refugees, as it already faces its own internal challenges. The refugee crisis has also posed unique challenges to Jordan and the U.N., as it is becoming apparent that the situation in Syria will not be resolved any time soon.

This means Zaatari will likely see a fourth birthday. Focus remains on how to ensure that donor funding meets the camp’s needs.

A bigger challenge is how Jordan and the U.N will be able to create enough opportunity for those living in the camp, particularly young children, who will know only life within the camp.

It’s a delicate balance in Jordan, and given the trajectory of the conflict in Syria with an increase of fighting in the south, it is likely that the balance will be more strained as more Syrians seek refuge in Jordan.