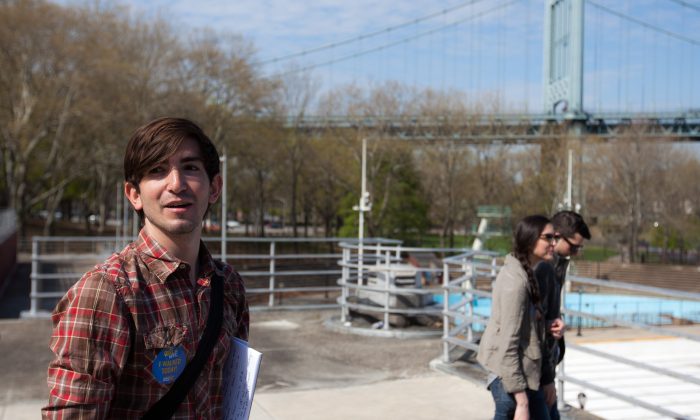 Michael Ryan, a resident of Astoria Village, led a Jane's Walk in his neighborhood May 3, 2014. (Petr Svab/Epoch Times)
New York

A Look Into Astoria Village, One of Queens’ Oldest Neighborhoods

Over the weekend, New Yorkers and people from around the world led and walked 130 Jane’s Walks throughout the five boroughs, celebrating the influential urbanist Jane Jacobs’ birthday. Unlike guided tours,  the walks are open conversations putting Jacobs’ ideas into practice, learning about neighborhoods at the street level.

Recent Gallatin graduate Michael Ryans, a two-year resident of  Astoria Village, led a tour through his neighborhood sharing some highlights.

The village was established in the mid-1600s, and few original structures remain.

“I’m really interested in how people use spaces,” said Ryan, who now works at the Municipal Art Society. “Jane’s Walk is great because it’s about bringing people … who have never been here although they’re longtime residents. They’re talking about first impressions and longtime experiences in the same space and I think that discussion is the most important thing.”

Growing up in Georgia, Ryan never saw open space as something that needed to be debated–there was a wealth of it. He came to New York to study historic preservation, but quickly got swept up in the public space debate.

“I never saw public space and parks as something vital to people, as a cause to rally around, and in New York they really are,” Ryan said. “People need space to play, to breathe, to think about the city.”