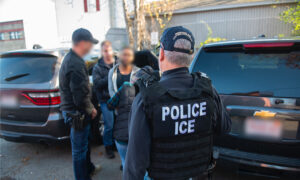 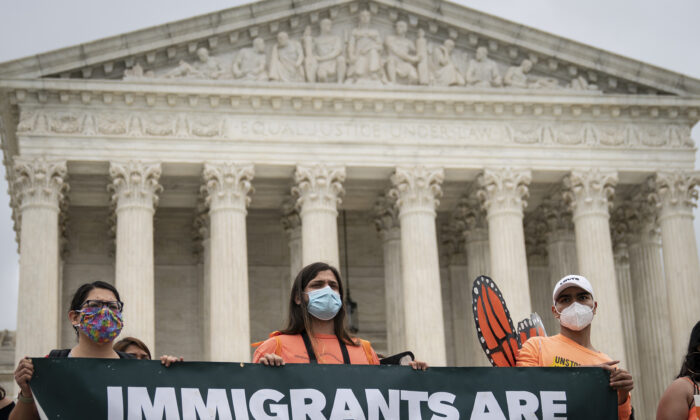 DACA recipients and their supporters rally outside the Supreme Court in Washington on June 18, 2020. (Drew Angerer/Getty Images)
Congress

A Look Inside H.R. 6, the Bill That Would Provide Legal Status to Minors Brought to US Illegally

The Democrat-controlled House of Representatives passed H.R. 6 on Thursday in a 228-197 vote, with nine Republicans joining them. The bill includes two main provisions, one of them, The Dream Act and The America Promise Act, would, if enacted, grant legal status to children who were brought to the United States illegally.

Advocates for the reform say it would give children brought to the country through no fault of their own, a path to citizenship. But opponents say the bill sends a message that illegal entry to the United States will be rewarded and encourages trafficking of minors to take advantage of loopholes in the immigration system.

The first section, called The Dream Act would give illegal immigrants conditional permanent resident status for 10 years, and cancel removal proceedings if they have been continuously (illegally) physically present in the country on or before Jan. 1, and were 18 years old or younger on when they were brought to the United States.

They are eligible even if they have taken part in illegal activities, such as smuggling, student visa abuse, ineligibility for citizenship, polygamy, international child abduction, unlawful voting, or are former citizens who renounced citizenship to avoid taxation; and have not participated in persecution; marijuana or a minor traffic violation.

The bill states that they are not eligible if they pose a national security threat.

However, they may be ineligible if any federal or state law punishable by a jail sentence of more than one year has been broken; if they have three or more federal or state offenses for which the person was convicted on a series of dates and imprisoned for a total of 90 days or more; or if they have a domestic violence offense.

Further eligibility requirements include graduating from high school, obtaining a GED or industry-recognized credential, or being enrolled in a program assisting students in obtaining a high school diploma, completing an apprenticeship program, being registered for selective services, and passing security and law enforcement background checks.

Additionally, children of temporary workers who arrived in the United States at the age of 18 or younger are also eligible for the status change.

In order to gain full lawful permanent resident (LPR) status, illegal immigrants have to fill one of these requirements: Obtain a degree from a higher education institute; complete at least two years in a bachelor’s or higher degree program (with good grades) in a college or in a technical education program at a post-secondary level; complete at least two years of military service with an honorable discharge; or be employed for periods totaling at least three years.

The bill also repeals Section 505 of the Illegal Immigration Reform and Immigrant Responsibility Act of 1996, which would allow illegal immigrants to access federal financial aid and work-study programs.

The bill would also permit illegal immigrants who were deported from the United States by the Trump administration to apply for legal status from abroad.

The provision states that illegal immigrants would have to have been continuously present in the United States for a period of no less than three years and were eligible for or had TPS on Sept. 1, 2017, or were eligible for DED status on Jan. 20.

The bill would require the secretary of Homeland Security to provide an explanation of a decision to terminate a TPS designation.

There are also a number of provisions that protect illegal immigrants during their LPR application process, including requiring the secretary of Homeland Security or the attorney general to provide a person, who on the surface appears eligible for removal, with a reasonable period of time to apply instead.

The protections also include exempting illegal immigrants from paying a fee if they are under the age of 18, received an income that is below 150 percent of the poverty line, are in foster care, do not have support, or cannot care for themselves due to disability.

The bill also authorizes the secretary to waive certain inadmissibility markers for “humanitarian” reasons such as family unity, or if the waiver is otherwise in the public interest. Making these waivers that are applied largely at the secretary’s discretion.

H.R. 6 will now move to the Senate for their consideration and vote, where it needs 60 votes to pass. This means that 10 Republican senators would have to join their Democratic colleagues.