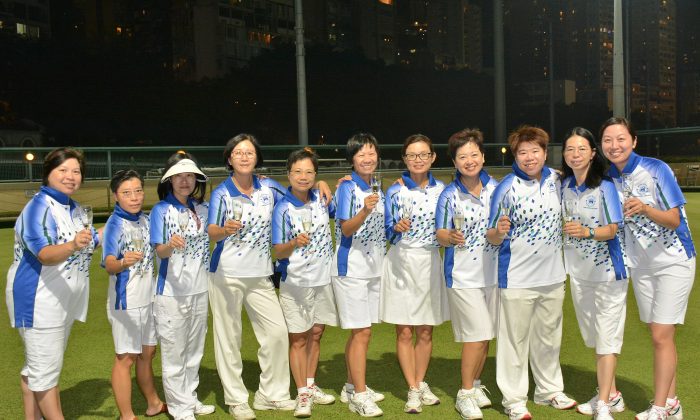 The year ended on a high when the Hong Kong team registered good results at the Asia Pacific Championship in Christchurch, New Zealand. In addition to the bronze medal received in the men’s fours by Tony Cheung, Terry Kung, Jason Choi and Wong Chun Yat, the team also got through to the play-off stage in five other disciplines.

The Hong Kong team continued to show their dominance in China when they collected three of the four medals available at the National Bocce (Lawn Bowls) Championships in Guangzhou in March. Vivian Yip and Helen Cheung took the gold and silver medals at the women’s Singles before partnered together to take the gold in Pairs. Ken KK Chan and Timmy Kwong won the gold in Men’s Pairs.

Despite a hiccup in the Pairs final, the Hong Kong International Bowls Classic was deemed a success and the talking point this year is the experimental move of introducing live online broadcast for the event. The broadcast proved popular with local and overseas bowlers and generated a lot of interest from external parties.

The video is available on YouTube and anyone interested can go search for “Hong Kong Lawn Bowls Association“.

A record breaking number of teams participated in the Premier League this year, 85 men teams and 42 women team joined the competition from April to October.

Kowloon Bowling Green Club successfully defended their Premier title despite losing a number of key players to Craigengower Cricket Club. They edged out arch-rival and 2013 champion Kowloon Cricket Club with just one point to retain the crown.

It was a disappointing season for CCC as the results showed that they may need more time for their new recruits to gel but finishing third is their best results for the past few years.

The year also marked Hong Kong Cricket Club’s return to the top flight after missing for 15 years. And the Hong Kong Youth Team will also join the elite division for the first time since its establishment in 2000.

Throughout the year a number of competitions were affected by poor weather with the most noticeable being the Classic and the Premier League.

The finals of the Classic Pairs was forced to move indoors for only the second time in its 30 years of history. The final between Australia and Hong Kong at Kowloon Bowling Green Club was stopped midway through due to heavy rain. It was then moved to the indoor greens of Club de Recreio and completed without further disruption.

The Premier league was hit by several weeks of consecutive poor weather and a lot of rescheduled games was played during the summer break and towards the end of the season. Fortunately, with the patience and cooperation of all teams and bowlers, the season was completed on schedule.

Greens remained the biggest challenges for the Association. This year the greens at the Police Officers Club was closed in July as part of the redevelopment work of the clubhouse which was completely demolished to give way to the Wanchai Bypass and Island Eastern Corridor Link project. A four rink artificial green will come back for use in 2020 when the new POC clubhouse opens.

Between now and 2020 the Police team will play on their new greens at the Police Sports and Recreation Club in Mongkok, which was opened in June.

The relocation of the west greens at Victoria Park was completed in December and was scheduled to open this week. This will help to ease the fixture congestion resulting from the closure of the Ap Lei Chau green in November, which was closed for renovation and will not be available until later in the first quarter of 2016.

The Triples League continues at all lawn bowls greens in Hong Kong with a start time of 2:30pm. On Sunday Jan 10, Round-1 of the National Pairs take place starting at 10:00am for men and 3:00pm for women.