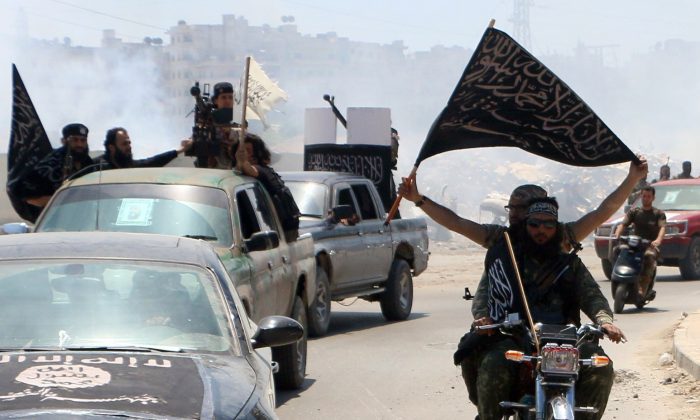 Fighters from Al-Qaida's Syrian affiliate Nusra Front drive in the northern Syrian city of Aleppo flying Islamist flags as they head to a frontline, on May 26, 2015. (Fadi al-Halabi/AFP/Getty Images)
International

CAIRO—The attack on a Mali hotel claimed by al-Qaida may have been partly aimed at asserting the global terror network’s relevance as it faces an unprecedented challenge from the Islamic State (ISIS) for leadership of the global jihadi movement.

Both groups are at war with the West and committed to the revival of an Islamic caliphate, but they are furiously divided over strategy and leadership, and have battled one another in Syria.

The attack on the Radisson Blu hotel in Bamako, which killed 19 people, came exactly a week after ISIS’ carnage in Paris, which killed 130 people in the bloodiest attack on France in decades.

The Mali attack, claimed by al-Qaida and a North African outfit known as Al-Mourabitoun (The Sentinels), may have been aimed at disrupting a fragile peace process with armed groups in the country’s north that had made progress in recent months.

But experts also suggested it was aimed at reminding the world that the movement founded by Osama bin Laden has not been completely eclipsed by ISIS and its self-styled caliphate.

“Al-Qaida and its international affiliates have been surpassed by ISIS and needed to show that that they are still there,” said Djallil Lounnes, an expert on radical groups in the Sahara who is based in Morocco.

The following is a look at the rivalry between al-Qaida and ISIS:

ISIS began as al-Qaida in Iraq, a local affiliate that battled U.S. troops and carried out massive attacks targeting the country’s Shiite majority. From the beginning there were tensions between the local group, led by the Jordanian Abu Musab al-Zarqawi, and al-Qaida’s central leadership. In a 2005 letter obtained and publicized by U.S. intelligence, bin Laden’s deputy, Ayman al-Zawahri, objected to al-Zarqawi’s brutality toward Shiite civilians, saying it would turn Muslims against the group. Al-Zarqawi was killed in a U.S. airstrike in 2006, but to this day is seen as the founder of the Islamic State group, which has eagerly embraced his brutal tactics.

In 2013, Islamic State leader Abu Bakr al-Baghdadi renamed his group the Islamic State of Iraq and the Levant (ISIL), proclaiming his authority in Iraq and neighboring Syria. Abu Mohammed al-Golani, the leader of the Nusra Front, al-Qaida’s Syrian affiliate, rejected the move and swore allegiance to al-Zawahri, who ordered al-Baghdadi to confine his operations to Iraq.

Al-Baghdadi refused, and by 2014 the Nusra Front and ISIS were battling each other across northern Syria. The split reverberated across the Muslim world, with al-Qaida affiliates in Yemen and North Africa remaining loyal to al-Zawahri while others pledged allegiance to ISIS.

Both groups want to end Western influence in the Middle East and unite Muslims under a transnational caliphate governed by a harsh version of Islamic law. But they are bitterly divided over tactics.

Bin Laden believed that attacking the “far enemy” of the United States would weaken its support for the “near enemy” of Arab autocracies and rally Muslims to overthrow them. Under al-Zawahri, local al-Qaida affiliates have sought to exploit post-Arab Spring chaos by allying with other insurgents and tribes, and by cultivating local support in places like Syria and Yemen, where they provide social services. For bin Laden, who was killed in a U.S. raid in Pakistan in 2011, and his successor al-Zawahri, the establishment of a caliphate was a vaguely defined end goal.

ISIS, on the other hand, began by seizing and holding territory in Syria and Iraq and spawning affiliates across the chaos-riddled Middle East. It declared a caliphate in the summer of 2014 and al-Baghdadi now claims to be the leader of the world’s 1.6 billion Muslims, the overwhelming majority of whom have rejected his brutal tactics.

For ISIS, al-Qaida is both an anachronism, because the caliphate has already been reborn, and a renegade movement, since it has rejected al-Baghdadi’s authority. Al-Qaida supporters dismissively refer to ISIS as “al-Baghdadi’s group.”

The assault on Paris was an implicit rebuke of al-Qaida, which hasn’t carried off an attack on that scale in several years. If the Mali attack turns out to be a response of some kind, it could herald a new era of global competition between the two groups, each seeking to outdo the other with ever more devastating attacks.