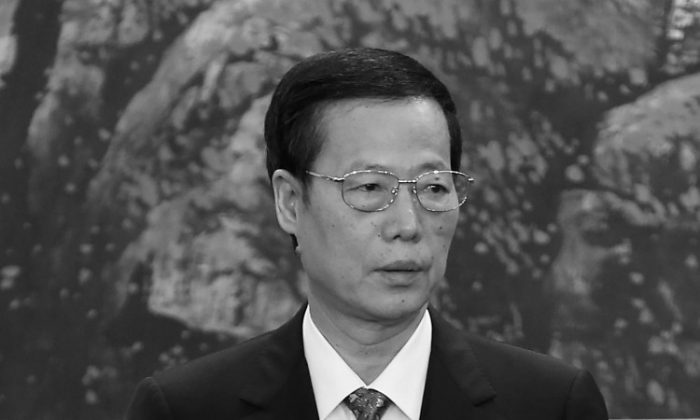 On Nov. 15 a new Standing Committee of the Politburo of the Chinese Communist Party was revealed. Apart from the Party leader Xi Jinping, and his deputy and head of economic affairs Li Keqiang, five names were relatively new. Zhang Gaoli is one of them.

Zhang Gaoli, who will be executive vice-premier and a member of the Standing Committee, was born in 1946 to an impoverished family living in Jinjiang County, Fujian Province. His father passed away while Zhang was younger than 10 years old and his widowed mother struggled to bring up five children. Zhang Gaoli attended Qiaosheng Middle School in Jingjiang City. In 1965, he was admitted to the Department of Economics at Xiamen University, where he majored in planning statistics. His schooling was suspended during the Cultural Revolution, though he later completed his degree.

In 1970, Zhang Gaoli was assigned to Guangdong Maoming Petroleum Company as a worker. Two important men took a liking to him: Zeng Qinghong, then Deputy Director of Foreign Affairs Bureau of the Ministry of Petroleum, and Zhou Yongkang, Manager General of China Petroleum & Natural Gas Co., Ltd. Both are known stalwarts of Jiang Zemin.

In 2001, he was transferred to Shandong Province and in 2003, became the Shandong provincial party secretary, the top official of that province. At the 17th Party Congress held in 2007, he was appointed as a Politburo member and concurrently, the Party Secretary of Tianjin Municipal committee.

According to political insiders, Zhang Gaoli became one of Jiang Zemin’s favorites because of an incident that occurred during the May 1st Labor Day period in 2006. The retired Jiang showed an interest in going sight-seeing at the popular Mount Tai. Disregarding the holiday tourist’s feelings and any inconvenience they may suffer, Zhang Gaoli ordered the sight-seeing area off limits for two days and demanded the subordinate leadership to line up to greet Jiang Zemin, proclaiming him their beloved leader. A large litter, carried by eight laborers, transported Jiang up and down the mountain and Zhang Gaoli himself walked at the rear as an escort. People said it looked like the procession of an ancient emperor.

According to Xin Guizi, chief of the Yunnan Provincial Party Committee Organization, that was Zhang’s most famous “Jiang-brownnosing” move. Zhang’s feting of the former leader was a risk, but it paid off with Zhang’s admission to the Politburo, and now the Standing Committee.

Zhang Gaoli also knows which way the wind blows. During the heyday of Bo Xilai, while Zhang was secretary of the CCP Tianjin Municipal Committee, he followed Bo closely and sang the “Red Songs,” extolling communism. In September 2009, Zhang and other officials organized a “ten thousand people singing assembly” in Tianjin city and themselves joined in the singing. Within a few months, in all districts and counties of Tianjin, the system had organized more than 23,000 performances, and about 3.8 million people had participated in these events.

In mid April, as soon as the political destruction of Bo Xilai was confirmed, Zhang sent out the call to the Political and Legal Affairs Committee of Tianjin that they had to “remain highly consistent with comrade Hu Jintao, the General Secretary of CCP Central Committee.”