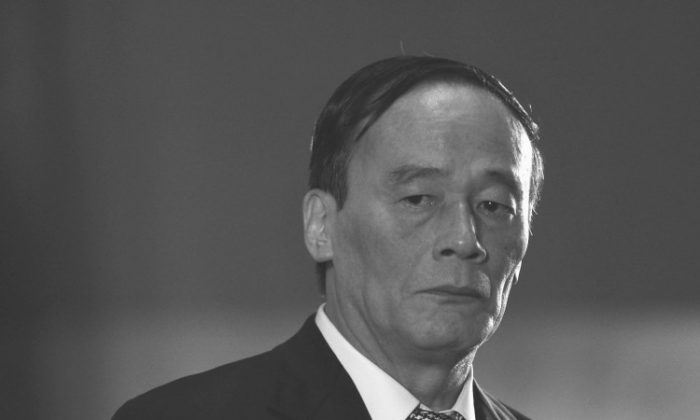 On Nov. 15 a new Standing Committee of the Politburo of the Chinese Communist Party was revealed. Apart from the Party leader Xi Jinping, and his deputy and head of economic affairs Li Keqiang, five names were relatively new. Wang Qishan is one of them.

Wang Qishan was born in July 1948 in Tianzhen County, Shanxi Province. His father was a professor at Tsinghua University in Beijing. Graduated from Beijing 35 High School in 1969, he was an “educated youth” and was sent to the countryside in Yanan City, Shaanxi Province. During this period he met the daughter of the top Party leader Yao Yilin, named Yao Mingshan, whom he later married. In 1973, Wang, as a so-called worker-farmer-soldier student during the Cultural Revolution (1966-1976), entered Northwest University to study history. After graduating in 1976, he worked at the Shaanxi Museum for three years, then changed his major from history of the Republic of China to modern macroeconomics.

In March of 1993, Zhu Rongji took over Yao Yilin’s position as vice-premier. Zhu appreciated Wang Qishan’s experience and abilities in the banking and finance sector. Three months later, Wang became the vice president of The People’s Bank of China.

Afterward, Wang was rapidly promoted. He became the president and Party secretary of China Construction Bank in 1996, then a member of the Standing Committee of the CCP Guangdong Provincial Committee in 1997, vice-governor of Guangdong in 1998, director and Party secretary of the Office of Economic Restructuring of the State Council in 2000, secretary of Hainan Province and director of the Provincial People’s Congress Standing Committee in 2002, deputy Party secretary of Beijing Municipality and acting major in 2003, member of the Political Bureau in 2007, then vice premier of the State Council in 2008. Though he ranks behind Hui Liangyu, who is in charge of agriculture, and Zhang Dejiang, who is in charge of key economic industries, both Wang Qishan and Li Keqiang are seen as the twin driving forces among these vice premiers.

Wang may not get much chance to focus on economic development, though, given that he has been assigned to the Party’s anti-corruption body.