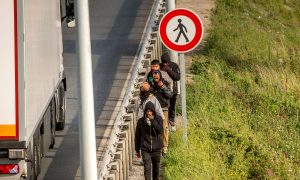 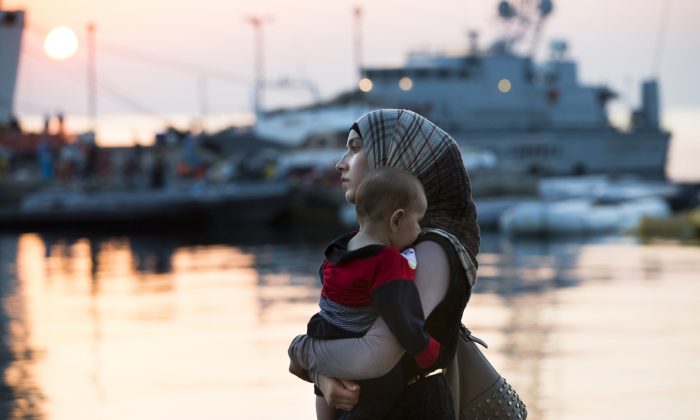 A Syrian refugee woman holding her child, walks to ferry which functions as a registration center and accommodation for migrants and refugees, after crossing by a boat from Turkey, in the southeastern Greek island of Kos on Aug. 17. (AP Photo/Alexander Zemilianichenko)
Europe

Record numbers of migrants from countries such as Syria and Eritrea are trying to reach Europe, despite the risks from perilous sea crossings and the inability of countries to provide adequate humanitarian assistance. Here are the latest developments Thursday:

Police are investigating a clash at an asylum-seekers’ home in eastern Germany in which 11 refugees and three police officers were injured.

Some 120 police officers were called to the home housing some 1,800 refugees in Suhl, southwest of Erfurt, late Wednesday. Police say one of the residents was attacked by a group of others for allegedly insulting the Quran by tearing pages from it.

Police say some 50 residents were involved and as many more watched the clash.

A ferry carrying about 2,500 migrants who had arrived clandestinely on Greek islands from the nearby Turkish coast docked Thursday in Greece’s main port of Piraeus near Athens.

The ferry was chartered by the government and served as a registration center on the eastern Aegean island of Kos this week. It left Kos on Wednesday with 1,300 migrants and picked up hundreds more from the islands of Leros, Kalymnos and Lesbos.

Vian Baker, a 21-year-old Syrian, said a dangerous crossing from Turkey led to a scramble for survival on the Greek island of Leros: “We slept on the street. We didn’t have blankets. We didn’t have anything. Even water. … We begged for water, we begged for food.”

The coast guard said it had picked up 519 people in 16 search and rescue operations from Wednesday morning to Thursday morning off the coasts of the islands of Samos, Agathonissi, Kos and Farmakonissi.

Macedonia has declared a state of emergency on its borders and is deploying additional troops to block thousands of migrants from entering.

Thousands of migrants were stranded Thursday on no-man’s land between Macedonia and Greece near the Macedonian town of Gevgelija, from where they planned to catch trains that would take them to the Serbian border on their way to EU-member Hungary.

Macedonia has become a major transit route for migrants heading from Greece to more prosperous EU countries. Almost 39,000 migrants, most of them Syrians, have been registered passing through the impoverished Balkan country over the past month, twice as many as in the month before.

The officials pledged to fortify security around the Channel Tunnel and to create a new joint police command to target human traffickers as they try to dissuade thousands of migrants from trying to make the illegal — and sometimes deadly — undersea journey to British shores.

Britain also pledged 10 million euros ($11.2 million) in new funding to help asylum seekers and to send others back home.

Since the start of June, at least 10 migrants have died trying to sneak through the Channel Tunnel in hopes of finding prosperity in Britain. Countless others have slipped through undetected on trucks and one recently on foot.

Baba Mujhse is 6-foot-6 Arabic-speaking Hungarian who’s built like a heavyweight boxer and has tattoos all over his body. He may sound like the type of guy most people would run from — but hundreds of desperate migrants are instead running to this giant for help.

The 31-year-old and his posse of volunteers help care for migrants at Budapest’s Keleti station, the most popular train terminal for migrants because it’s the departure point for trains to wealthy European Union nations such as Austria and Germany.

Italy: At Least 40 Migrants Dead at Sea, 320 Others Rescued

This Good Samaritan’s huge size has mostly been an advantage in his volunteer work, dissuading far-right groups intent on intimidating migrants at the station.

“It creates a feeling of security in the migrants,” Mujhse said, after distributing boxes of muesli bars to children and helping fill a plastic tub for a baby’s bath.