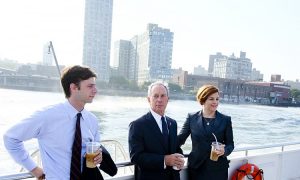 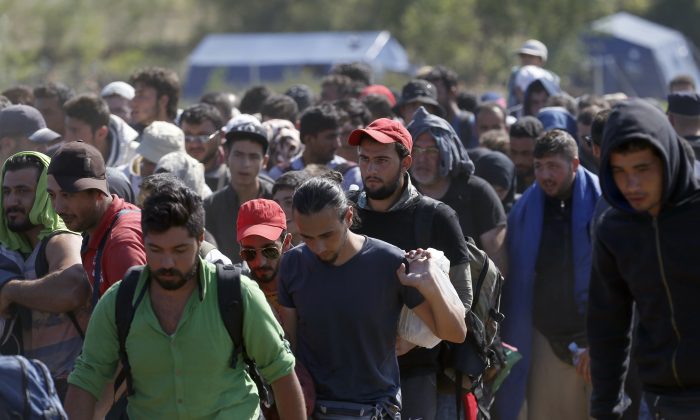 Migrants walk into Serbia over the border with Macedonia near the village of Miratovac, Serbia, Monday, Aug. 24, 2015. The more than 5,000 migrants who reached Serbia overnight faced an overcrowded refugee center where they have to apply for asylum — the paper that allows them three days to reach Hungary. (AP Photo/Darko Vojinovic)
Europe

Record numbers of migrants and refugees fleeing violence and poverty in countries such as Syria, Afghanistan and Eritrea are trying to reach Europe, despite the risks of perilous sea crossings and the inability of countries to provide adequate humanitarian assistance. Here are the latest developments Monday:

Migrants Clash With Macedonian Police on Border With Greece

In a new human wave surging through the Balkans, thousands of exhausted migrants from the Middle East, Asia and Africa have crossed on foot from Macedonia into Serbia on their way to Western Europe.

The rush over the border came after Macedonia lifted the blockade of its border with Greece, after thousands of migrants stormed past Macedonian police who tried to stop their entry by force.

Some 7,000 migrants, most of them fleeing the war in Syria, had crossed into Serbia over the weekend by Monday morning. They included many women with babies and small children and others were pushed in wheelchairs and wheel barrows or walked on crutches.

After entering Serbia, the migrants head toward EU-member Hungary from where they want to continue further north to richer EU countries.

Greek and Turkish coast guard vessels have recovered five bodies after two boats carrying refugees or migrants capsized in separate incidents off the Turkish coast and a Greek island.

Greece’s coast guard recovered the bodies of two men, rescued six people and was searching for at least five more missing off the coast of the eastern Aegean island of Lesbos after the dinghy they were using to enter Greece from Turkey overturned early Monday. Their nationalities were not immediately known.

Across the narrow strait between the island and Turkey, Turkey’s coast guard recovered three bodies and rescued 73 refugees from Syria and Afghanistan after a fishing boat that would have taken them to Lesbos capsized off Turkey’s Aegean coast at Canakkale, Turkey’s state-run Anadolu Agency reported.

Police estimate the two vans were carrying up to 90 migrants. They say some fled, along with the smugglers driving the vehicles.

A Sudanese migrant accused of walking the entire length of the 31-mile (50-kilometer) Channel Tunnel from France to Britain has pleaded innocent to charges.

Abdul Rahman Haroun, 40, denied causing an obstruction to an engine or carriage when he appeared at Canterbury Crown Court in Kent via video link.

Kent police say Haroun, 40, allegedly slipped past officers at the entrance of the tunnel and dodged hundreds of security cameras before being spotted by British security guards near Folkestone.

Germany’s government has denounced the far-right protests outside a refugee shelter in which dozens of police were injured by a neo-Nazi mob hurling bottles and fireworks at officers trying to ensure asylum seekers could move in.

Chancellor Angela Merkel’s spokesman Steffen Seibert said she and the entire government “condemn in the strongest possible terms the violent attacks and the aggressive anti-foreigner sentiment created there.”

He added: “It’s repulsive how far-right extremists and neo-Nazis are trying to spread their hollow message of hatred around a refugee shelter.”

Hundreds of people took part in a peaceful march outside the repurposed hardware store in Heidenau, south of Dresden, on Friday evening. But hours later some of the protesters began attacking police.