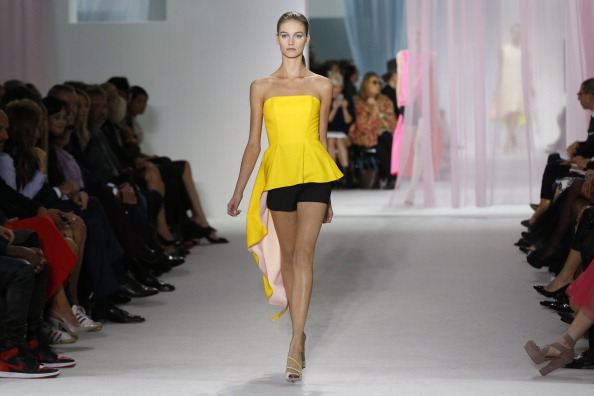 A model presents a creation for Christian Dior during the Spring/Summer 2013 ready-to-wear collection show on September 28, 2012 in Paris. (AFP PHOTO/FRANCOIS GUILLOT)
Fashion

A Look at the Fashion Phenomenon Peplum

Fashion is like turning wheel. What once appears is bound to surface again. Peplum—a short skirt attached to a bodice or jacket, a flounce below the waist—has made a return to catwalks over the past two years.

Designers, fortunately, have tamed ‘80s version into a more sophisticated and elegant flounce. The great advantage of peplum is its slimming effect, and that it accentuates the waist. It is feminine, and suitable for most shapes—it’s a fashion one can feel comfortable in even with a full belly after a big meal.

As the wheel of fashion has turned, peplum has surfaced during various eras, presenting different advantages along the way.

Peplum’s history brings us from ancient Greece, through the Renaissance, and into the post-war era of the 20th century.

Women in ancient Greece tied a shawl (peplos) around their waists, creating folds in their garments. Many centuries later, during the Renaissance, men adopted the fashion, modifying it so it emphasized the V-shape of the torso.

The peplum we know today is most similar to the 1940’s version. It was ubiquitous in the ‘40s, when women’s clothes became more austere and masculine. Women, deprived of their men during the war, had to suddenly take up quintessentially masculine work, and the fashion of the time reflected that.

It wasn’t just the cuts, but also the material, that changed. Coco Chanel’s groundbreaking collection of jersey dresses appeared at this time, simplified and shortened dresses that wouldn’t interfere with daily duties.

After the war, peplum emerged as a popular fashion. Women kept their newly acquired positions, and peplum helped them regain some feminine elegance in their otherwise masculine garments.

Peplum persisted until the 1950s. It faded out only to reappear on catwalks in the 1980s with colorful patterns and accentuated by the padded shoulders and poufy sleeves.

Looking back on the phases of peplum, we can take inspiration for its use. Peplum works well with a pencil skirt, as shown by Christian Dior in 1947. It accentuates the feminine hourglass shape.

Narrow trousers can also be worn in place of a skirt.

Peplum was seen in this year’s fall/winter shows, giving it a full four seasons in the limelight.

Before wearing peplum, make sure it suits your shape. Though it suits most shapes well, it can make the legs appear shorter, so if you have short legs and a long body, it may not work for you.

Ingrid Longauerová
journalist/graphic designer
Follow
Ingrid Longauerová is a long time employee at the Epoch Media Group. She started working with The Epoch Times as a freelance journalist in 2007 before coming to New York and work in the Web Production department. She is currently a senior graphic designer for the Elite Magazine, a premier luxury lifestyle magazine for affluent Chinese in America produced by the EMG.
TOP NEWS