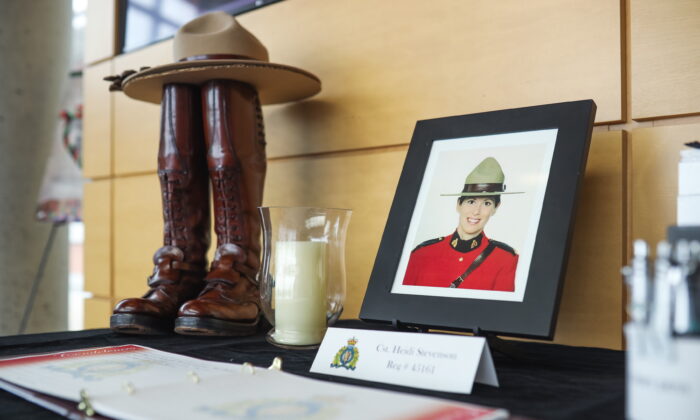 PORTAPIQUE, N.S.—The victims in one of Canada’s worst mass killings include an RCMP officer, a teacher, two nurses, neighbours of the shooter and two correctional officers killed in their home.

Here is a look at some of the lives lost:

His neighbours in Wentworth, N.S., say Bagley, a military veteran and retired firefighter, was killed Sunday morning as he walked toward a burning home on Hunter Road.

“If you knew him, you knew that was just who he was all the time,” Charlene Bagley wrote in a Facebook post.

Bagley served as a firefighter at the Halifax Stanfield International Airport from 1975 to 2006, a spokeswoman for the airport authority said in an email.

Ellison, 42, was remembered Monday as a thoughtful, kind friend who went out of his way to help others.

“He’s the type of person that I don’t think anybody would want to see that happen to him,” his father Richard Ellison says.

Corrie Ellison lived in Truro, N.S., but was visiting his father in Portapique when he was killed. Richard Ellison declined to comment on how his son died.

Ashley Fennell says she was good friends with Corrie Ellison for almost a decade. She describes him as “a beautiful soul.”

Corrie Ellison was on disability support because of an old injury. He had no children of his own but he loved kids, Fennell says.

He would join Fennell and her son swimming in the summer and last Christmas, he offered some money for her son’s gifts. He once paid for Fennell to take her son on a trip to a water park when she was struggling.

“I would call him, and it didn’t matter what he was doing, he would jump for me,” she says.

He had texted her about picking up a cigarette roller about a week ago, but the two never arranged a time with the ongoing pandemic. Fennell didn’t know it would be the last time she talked to her friend.

“I didn’t text him back right away and now I’m regretting all this,” she says. “He was just such a nice guy.”

The family members were neighbours of the shooter. Oliver’s sister, Tammy Oliver−McCurdie, said the three were found dead in their Portapique, N.S., home.

Oliver was turning 40 this year and her husband was 45. Their daughter, Emily, was 17.

They had moved to the community after Tuck’s father died a few years ago.

“No matter how much they went through in life they always stayed together, and there was times that they had nothing,” Oliver−McCurdie said.

The sisters grew up in Calgary and remained close into adulthood. Oliver−McCurdie said Oliver was a people person who loved working as a waitress, which she did for most of her life.

“She was such a great listener.”

Emily was an intelligent girl who had plans to continue her education, but couldn’t decide whether to pursue art or welding, her aunt said.

McLeod’s daughter said the couple deeply loved and cared for her, her little sister and Taylor’s daughter.

“They would have done anything for anybody and they always made sure people were welcome in their home.”

The couple ran a firm that provides service, sales and installation of natural gas and propane units in the area where the shootings happened.

Relative Judy MacBurnie, said the pair had two small children who are being cared for by grandparents. Greg Blair also had two older sons from an earlier relationship.

MacBurnie said her nephew was a “wonderful person who was always laughing and was the funniest person you ever met.”

“He could find humour in anything and anybody … You couldn’t be around him too long because your face and belly hurt so bad from laughing.”

The Victorian Order of Nurses said O’Brien was a licensed practical nurse and had worked with VON for nearly 17 years.

O’Brien’s daughter, Darcy Dobson, posted on Facebook about her mother.

“She was kind. She was beautiful. She didn’t deserve any of this,” Dobson wrote, pleading with friends and family not to let the shooting define her mother.

“I want everyone to remember how kind she was. How much she loved being a nurse,” she wrote.

“The way her eyes sparkled when she talked to her grandchildren and the way she just loved Christmas. Let those things define her. Not the horrible way she died.”

“She has so much compassion for the people she worked for and her family,” she says. “She was a very loving person. She was always out there to help somebody. It’s a tragedy that her family has to deal with this.”

Her daughter, Amelia Butler, said Goulet was diagnosed with brain cancer in 2016. Goulet was warned that her prospects didn’t look good, but she beat the odds.

Goulet was diagnosed with cancer a second time late last year, and had almost fully recovered when she died.

“She fought so hard for her life,” Butler said.

Goulet was a denturist for 27 years. Butler couldn’t say whether her mother encountered the shooter, who worked in the same field.

Butler said her mother was an avid angler and would often retreat to her cottage with her two dogs to go bass fishing.

Goulet was also a salsa dancer who would travel to Cuba whenever she got the chance.

“That was the place where she was the happiest.”

The Victorian Order of Nurses confirmed that Beaton had worked for the organization for six years.

“Kristen began work with VON nearly six years ago and … was a caring and compassionate member of the VON team.”

Beaton’s husband Nick Beaton posted on Facebook a plea to get Nova Scotia nurses the proper equipment to protect them from COVID−19 in his wife’s honour.

“She cried everyday before and everyday after work scared to bring this covid home to her son she loved more than I could even imagine anyone could love one person,” Nick Beaton posted.

“We need to be her voice now. So please for Kristen’s sake protect the ones who are protecting us.”

McCully was a teacher at the elementary school in the community of Debert, N.S.

Paul Wozney, president of the Nova Scotia Teachers Union, said McCully was known as a passionate teacher and “as a shining love” in the lives of her friends and family.

Stevenson had been with the RCMP for 23 years and was a mother of two.

“Heidi answered the call of duty and lost her life while protecting those she served,” Nova Scotia RCMP Assistant Commissioner Lee Bergerman said in a statement.

“Two children have lost their mother and a husband his wife. Parents lost their daughter and countless others lost an incredible friend and colleague.

“There are no words to describe their pain.”