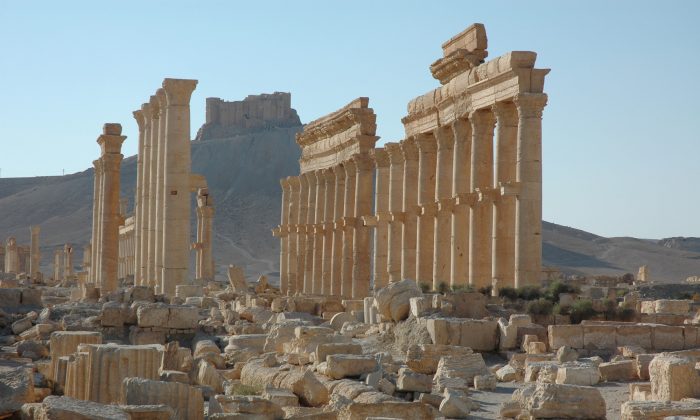 The site of the ancient city of Palmyra in Syria. (Ron Van Oers, UNESCO via AP)
Middle East

A Look at Palmyra, the Historic Syrian Town Retaken From ISIS

A desert oasis surrounded by palm trees in central Syria, Palmyra is also a strategic crossroads linking the Syrian capital, Damascus, with the country’s east and neighboring Iraq. Home to 65,000 people before the latest fighting, the town is located 155 miles (215 kilometers) east of Damascus.

A UNESCO world heritage site, Palmyra boasts 2,000-year-old towering Roman-era colonnades and priceless artifacts. Syrians affectionately refer to it as the “Bride of the Desert.”

Palmyra was the capital of an Arab client state of the Roman Empire that briefly rebelled and carved out its own kingdom in the 3rd Century, led by Queen Zenobia. Before the war, it was Syria’s top tourist attraction, drawing tens of thousands of visitors each year.

Palmyra was first mentioned in the archives of Mari in the 2nd millennium B.C., according to UNICEF’s website. The town was the hub of a network of caravan trails that carried silks and spices from eastern Asia to the Mediterranean.

Palmyra became a prosperous region during the Hellenistic period and later became part of the Roman Empire. But its rebellious Queen Zenobia challenged Rome’s authority. The city was plundered in A.D. 272 after she was captured during a long siege.

In more recent times, Palmyra has had darker associations for Syrians. It was home to the Tadmur prison, a notorious facility where thousands of opponents of President Bashar Assad’s government were reportedly tortured. ISIS demolished the prison after capturing the town.

Last year, ISIS destroyed the Temple of Bel, which dated back to A.D. 32, and the Temple of Baalshamin, a structure of stone blocks several stories high fronted by six towering columns. The militants also blew up the Arch of Triumph, which had been built under the Roman emperor Septimius Severus between A.D. 193 and A.D. 211.

The extremists have destroyed ancient sites across their self-styled Islamic caliphate in Syria and Iraq, viewing them as monuments to idolatry. In August, ISIS militants beheaded Khaled al-Asaad, an 81-year-old antiquities scholar who had devoted his life to studying Palmyra. His body was later hung from a Roman column.

A video circulated online purportedly showed ISIS fighters shooting dead some 25 captured Syrian soldiers in a Palmyra amphitheater. The killings are believed to have taken place in May, shortly after the extremists captured the town. Another video showed militants killing three captives by tying them to Roman columns and blowing them up.

It’s not yet clear whether the ruins were damaged when Syrian forces retook the town. The Antiquities Ministry said ahead of the town’s fall that the remaining ruins are in good condition. It has vowed to restore the site.

The loss of Palmyra marks a major setback for ISIS, which has been losing ground for months in both Iraq and Syria. The capture of the town brings Syrian forces closer to Raqqa, ISIS’s de facto capital, and the eastern city of Deir el-Zour, which is almost entirely held by the extremists.

Despite its battlefield losses, ISIS retains the ability to carry out large attacks in the Middle East and further afield, such as the bombings in Brussels last week, which killed 31 people.