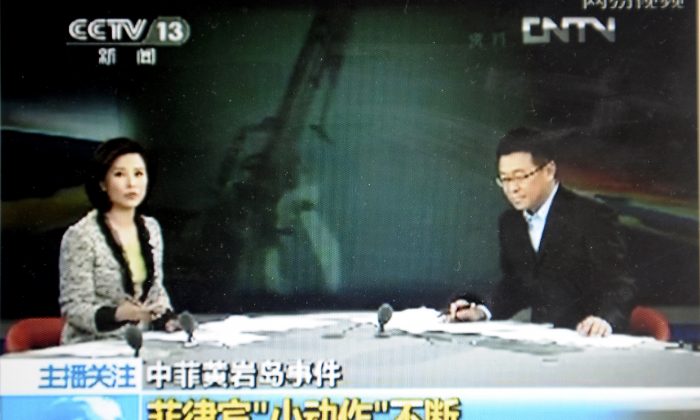 This file photo shows a screen grab from CCTV taken on May 7, 2012. A Chinese blogger points out that the differences between CCTV and Western media are worth a laugh, and some serious thought. (CCTV/AFP/Getty Images)
China

A Look At Chinese Media vs. Western Media

Let go of your indignation about big media news biases for a minute and see the humor in these 10 comparisons between Chinese and Western journalism.

The Chinese blogger who wrote this list points out that after a laugh, this does deserve some serious thought.

1. Nonstop occurrence of fake products reaching the market and incidents of food poisoning.

Western media: The government should think hard, increase regulation and supervision. It should not shirk responsibility for this problem.

CCTV: Citizens should increase their awareness, improve their ability to identify fake products, and recommend people not to purchase expired and spoiled food.

2. Children from poor mountainous regions cannot afford to go to school, and they heavily rely on donations from teachers working at the local schools.

Western media: This is negligence of duty and an utter shame on the education and social security departments.

CCTV: Let’s call on everyone to learn from our teachers working in rural areas. This is a glorious era and they are the pride of our nation.

Western media: This reveals that there must be something wrong with the supervisory mechanism.

CCTV: The supervisory department discovered the problem in time and saved tremendous loss of the country. It’s a remarkable achievement.

4. Collapse and explosions at mines.

CCTV: These incidents have gotten much attention from the government officials in charge of safety supervision. These superiors angrily shouted at their subordinates and personally wrote notes that investigations would be carried out to bring those accountable to justice.

5. Dangerous criminals on the loose.

Western media: Informs citizens to be alert and immediately call the police with any information on suspects. Avoid any direct confrontation with the criminals.

CCTV: Appeals to citizens to take action into their own hands—confront and fight the criminals. Only when everyone takes the initiative will public security fundamentally improve.

6. The entire area is living in poverty, local folks are starving. Medication is unaffordable.

CCTV: The officials in charge have done excellent work, personally delivering warmth and kindness to those in need. The local people are so grateful to them and affectionately call the officials “good public servant,” “great leader,” “a close friend,” and “the general public’s parents.”

7. What news makes the headlines each day.

Western media: News that is significant, interesting, or trending will be the headlines of the day.

CCTV: News that involve government officials, the higher the ranking the more newsworthy, will be the headlines of the day, even though the officials may have just said a few insignificant words.

CCTV: Every single piece of news is good news. If there is bad news, it must be reported in the last few minutes of the news program, or at the back of the paper.

Western media: News coverage on environmental issues is always solemn and alarming, even though the rivers appear crystal clear in their countries.

CCTV: There is a constant stream of news on environmental achievements and improved standards, even though the rivers are murky and give off a stinky odor.

Western media: The state of education and health care is almost always unsatisfactory. However, only a small percentage of westerners cannot afford school, and emergency hospital care is covered.

CCTV: Puts much emphasis on the importance of education, health care reform, issuing fines to hospitals for charging patients in excess of their “real” bills, and other great accomplishments. Nonetheless, there is still a large percentage of people who cannot afford to go to school or the hospital.

Translation by Frank Fang and Rebecca Chen. Written in English by Katy Mantyk.