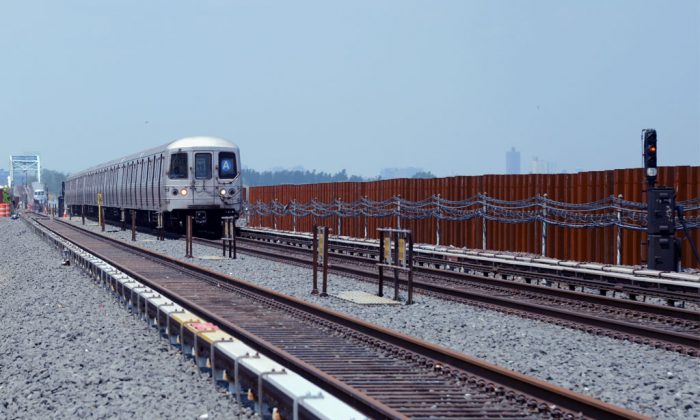 Five artists were commissioned to create artwork for the renovated stations.

Come Monday, the Queens-bound sides of the 88th St. and 104th St. stations along the Liberty Avenue A Line in Queens will open with new artwork and other renovations as part of the $39 million capital project that will ultimately see the complete renewals of five stations.

“For these stations, originally opened in the early 1900s, these improvements will create significantly better conditions for our customers,” said NYC Transit President Carmen Bianco in a press release. “We appreciate the community’s patience and understanding while we carry out this important work.”

These five stations, some a century old, have served many A-train riders.

When the elevated 88th St. stations opened in Ozone Park in 1915, the fare was 5 cents. The opening was welcomed by a parade, a hundred Queens property owners, and government officials, according to the New York Times archive.

The 104th St. station in Ozone Park opened in 1915 and has had several different names. It was originally opened as an extension of the Fulton Street Elevated, a series of elevated stations mostly in Brooklyn, under the name Oxford Avenue.

In May of this year, the Queens-bound sides of these stations were the first two platforms to close down for the start of the $39 million renewal project and free shuttles were provided to take passengers to other nearby stations in the meantime.

In the second phase of this project, the Manhattan-bound platforms at 88th St. and 104th St. will be closed for about 14 weeks, from October 2014 to January 2015 for renewal work. Free shuttle buses will take passengers to nearby stations.

Both stations are opening with upgraded staircases, accessibility fixes, mezzanine floors, doors, windows, and walls. They were repainted and railings and windscreen panels were replaced.

Five artists were commissioned to create artwork for the renovated stations.

At 88th St., artist Haresh Lalvani created a series of laser-cut stainless steel panels that will, through the geography of the station, appear to morph into different patterns.

At 104th St., artist Beatrice Coron created a sculpture of a deck of giant playing cards. As the train moves, passengers can watch the sculpted-steel cards seemingly unfold.