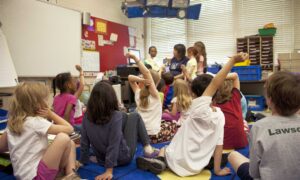 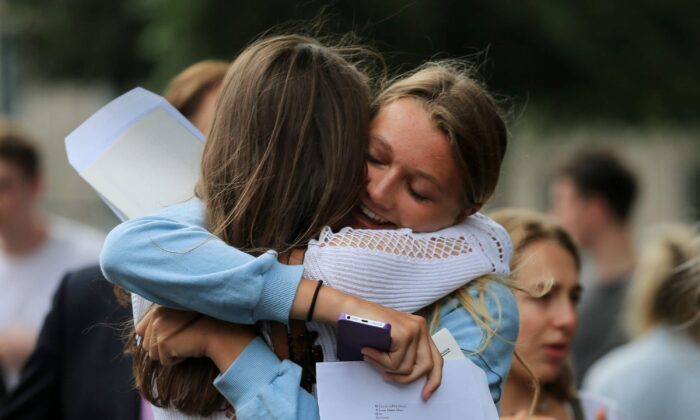 The proportion of A-level entries awarded an A grade or higher has risen to an all-time high after exams were cancelled for the second year in a row due to COVID-19.

In total, more than two in five (44.8 percent) of UK entries were awarded an A or A* grade this summer, up by 6.3 percentage points on last year when 38.5 percent achieved the top grades.

In 2019, when exams were last run before the pandemic, just 25.5 percent of entries achieved an A or above.

Hundreds of thousands of students have been given grades determined by teachers, rather than exams, with pupils only assessed on what they have been taught during the pandemic.

Girls performed better than boys at the top grades, and female maths students overtook boys for the first time in the number of A* grades achieved, figures for England, Wales, and Northern Ireland show.

On Tuesday, Ucas said a record number of students have secured a place on their first-choice university course following the bumper year for results.

But youngsters who missed out on the grades required to meet their offers are likely to face greater competition for a place at top institutions as there could be fewer courses on offer in clearing.

The figures, published by the Joint Council for Qualifications (JCQ), cover A-level entries from students in England, Wales, and Northern Ireland.

The Scottish Highers results were also released on Tuesday.

School results in Scotland are consistently lower than last year but have shown a sharp rise since 2019, before the pandemic.

But the figure for Higher qualifications is significantly above the 2018–19 level, which was just 75 percent, while the Advanced Higher rate increased from 80 percent.

This year, teachers in England submitted their decisions on pupils’ grades after drawing on a range of evidence, including mock exams, coursework, and in-class assessments using questions by exam boards.

According to an analysis by Ofqual, some 6.9 percent of students in England were awarded three A*s this year, compared with 4.3 percent in 2020 and 1.6 percent in 2019.

Education Secretary Gavin Williamson has defended this year’s results amid concerns over grade inflation, as he called on people to celebrate young people’s success during a difficult year.

Jill Duffy, chief executive of OCR exam board, said that the higher grades reflected the fact that pupils had “multiple chances” to show their knowledge and they were less likely to have a “bad day” in an exam.

She told a media briefing: “Teachers will have used their experience to assess all students in 2021 against the same standards that would apply when exams take place.

“However, in this unusual year, fewer students are likely to have had a bad day when taking assessments, and they have multiple chances to show what they know and can do.

“And so a greater proportion than usual will have achieved higher grades.”

Last summer, the fiasco around grading led to thousands of A-level students having their results downgraded from school estimates by a controversial algorithm before Ofqual announced a U-turn.

This year, no algorithm was used to moderate grades.

Instead, schools and colleges in England were asked to provide samples of student work to exam boards, as well as evidence used to determine the grades for the students selected, as part of quality assurance (QA) checks.

Random and targeted sample checks of evidence were also carried out after grades were submitted.

Ofqual said that student work from 1,101 centres in England, around one in five schools and colleges, was scrutinised by exam boards.

For 85 percent of the schools and colleges whose students’ work was scrutinised as part of QA checks, the regulator said the subject experts were satisfied that the evidence supported the teacher-assessed grades that were submitted.

For the remaining 15 percent, professional discussions took place between teachers and curriculum leads in schools and colleges with external subject experts and, where necessary, centres reviewed and revised their grades.

This represented less than 1 percent of all the grades issued on Tuesday, according to the exams regulator.

But Ofqual said that, at the time of writing its report, exam boards were in continuing discussions with “a small number of centres” and grades would be withheld for these schools should concerns remain unresolved on results day.

Williamson has said, “employers can have real confidence” in the grades awarded to pupils.

Asked about concerns about grade inflation, he told ITV’s Good Morning Britain: “These grades are absolutely worth so much, they are the key for those youngsters to take that next step.

“But we do have to recognise that, as we come out of this pandemic, we will equally have to take steps and take a glide path back to a more normal state of affairs.”

Paul Whiteman, general secretary of the NAHT school leaders’ union, said: “Our advice is to ignore the chat about grade inflation.

The grades awarded in 2021 are a holistic judgment based on the work that students have produced.

“These evidence-based decisions are very different to the normal way grades are awarded through exams.

“Students should be confident that they are getting the grades they deserve and that reflect the standard of achievement they have demonstrated.”

Geoff Barton, general secretary of the Association of School and College Leaders (ASCL), said: “It is important to understand that the system used to assess students this year is different from both formal exams and the approach that was used last year too, when an attempt to use an algorithm to standardise grades nationally went wrong and had to be abandoned.

“It is therefore invidious to make direct comparisons with other years and vital that we celebrate the achievements of this year’s cohort who have had to endure so much over the past 18 months.”