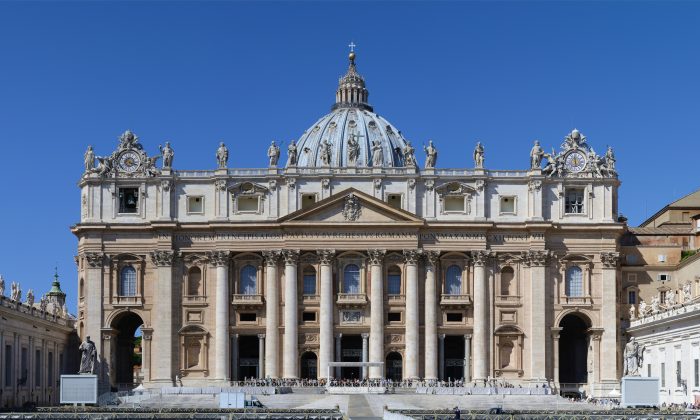 The main facade of St. Peter's Basilica at the Vatican. (Alvesgaspar/Public Domain)
Opinion

As you may know, the Pontifical Academy of Sciences (PAS) will soon hold the 2017 Pontifical Academy Summit on Organ Trafficking and Transplant Tourism on February 7-8 in Vatican City. Seventy-nine experts and leaders from different countries will attend and speak at the summit. A PAS statement would be signed by the participants and distributed worldwide.

While it’s important to discuss how to prevent organ trafficking and transplant tourism, at least two Chinese surgeons who are set to attend the summit are perpetrators of forced organ harvesting in China: Dr. Huang Jiefu (p.9 in the summit program booklet) and Dr. Wang Haibo (p.10). We humbly call on Your Holiness to ban them from attending the summit.

Huang Jiefu is a leader in the Chinese Communist Party (CCP) who has led a nationwide extrajudicial operation to forcibly harvest organs from live Falun Gong practitioners and other religious believers. From October 2001 to early 2013, Huang was vice minister in charge of organ transplantation in the CCP’s Ministry of National Health and Family Planning Commission.  He helped the establishment of organ transplantation centers in many hospitals across China.  As an organ transplantation surgeon, Huang is one of the biggest butchers who has directly participated in forced organ harvesting.  He claimed he performed over 500 liver transplantations in 2012 (see Special Report on Huang, Wang, & Victimized Christian http://www.upholdjustice.org/node/379, WOIPFG 2017).

Evidence shows that most of the so-called donors are Falun Gong practitioners who have been apprehended as part of the CCP’s persecution of their faith. According to a report authored by my organization, the World Organization to Investigate the Persecution of Falun Gong (WOIPFG), more than one million Falun Gong practitioners have been murdered for their organs over the last 15 years (The Final Harvest, http://www.upholdjustice.org/node/338, WOIPFG 2016).  Huang established a so-called organ donation system in China in 2010. Additionally, he served as the honorary chairman of the China Organ Procurement Organization Alliance. He has been using this cover-up donation system to whitewash the CCP’s crimes of forced organ harvesting. Our investigation shows that his donation system is a hoax (http://www.upholdjustice.org/node/330, WOIPFG 2015).

The other surgeon set to attend the summit, Wang Haibo, is also a major organ harvesting perpetrator. In charge of the China Organ Transplant Response System, Wang served as Assistant Director of the Chinese Liver Transplant Registry and is involved in the organ supply chain fueled by Falun Gong practitioners who have been murdered-on-demand by the Chinese regime.

Communist dictatorships have resulted in the unnatural deaths of more than one hundred million people worldwide. In China alone, the CCP has tortured and starved more than eighty million people to death since it took power in 1949. The CCP teaches atheism and has brought hardships and disaster to all religious believers in China, including Catholics. It destroyed China’s authentic, divinely inspired culture and traditional values, and has ruined the morality of the entire society. The most inhumane and unspeakable crime committed by the CCP is forcibly harvesting the organs from millions of prisoners of conscience while they are still alive.

There have been several series of investigations carried out on forced organ harvesting in China since we first learned about this atrocity in 2006. Not only my organization, but independent investigators have devoted their time and resources to bring this barbaric practice to an end. There have been resolutions passed in the U.S. House of Representatives and European Parliament, most notably, condemning these horrid acts.  Last year, the U.S. House of Representatives unanimously passed H.Res.343, which condemns state-sanctioned organ harvesting in China (https://www.congress.gov/bill/114th-congress/house-resolution/343/actions).

The most recent independent investigation estimates that more than 100,000 per year Falun Gong practitioners murdered for their organs for the past 15 years. The evidences of these heinous crimes are clear and irrefutable: (1) The explosive growth of China’s organ transplantations: the number of liver transplants in 2006 was more than 180 times of that of 1999, the year the CCP started to persecute Falun Gong. The number of hospitals that could perform organ transplants in 2006 was 20 times of that in 1999; (2) Existence of massive living organ donor pools: as proved by the extremely short waiting periods for transplants (two weeks in China versus two to three years in the West); extremely high percentage of emergency transplants and multiple back-up organs for some transplant recipients; and (3) A common phenomenon in China since 1999 is that many hospitals can conduct several, up to two dozens, kidney and liver transplant operations on the same day, or even at the same time.

With Huang Jiefu and Wang Haibo representing China in the upcoming Vatican organ summit, it would be a pity if the Pontifical Academy of Sciences became a platform for these perpetrators to mislead and deceive the world and to whitewash their crimes, which is a new, unprecedented form of evil in this world.

We sincerely request that you ban Huang Jiefu and Wang Haibo from attending the summit. We hope that the Pontifical Academy of Sciences will prevent these perpetrators from sullying your event, and deceive Catholics and the world of one of the vilest abuses ever known. We hope Vatican can initiate an investigative effort and help to stop the organ harvesting crime all together.

With every best wish.