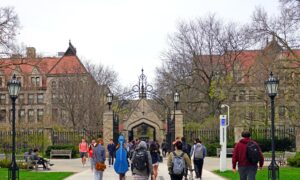 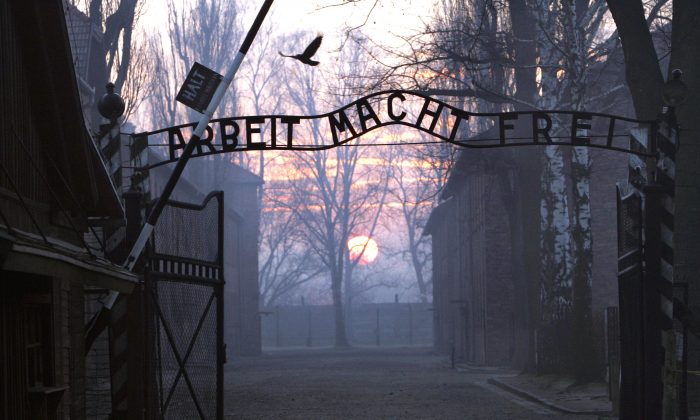 The main gate of the former Nazi death camp of Auschwitz-Birkenau, with the lettering “Arbeit macht frei” (Work makes you free), in Oswiecim, Poland, on Jan. 13, 2005. (Janek Skarzynski/AFP/Getty Images)
Opinion

At the main entrance of the Nazi camp at Auschwitz one could read: “Arbeit macht frei” (Work makes you free). The current trial of Reinhold Hanning, 94, a former SS guard at the camp, brings to mind one of the saddest ironies in that most tragic place.

Hanning is being tried in the court city of Detmold, in western Germany, for his complicity in the death of 170,000 people, when he was just over 20 years old. Hanning is not charged with having directly participated in the killings in the camp but prosecutors accuse him of facilitating the murders in his capacity as a guard.

Hanning had been urged by his stepmother to join the SS. He was sent to France and then to the east in the war front. After he was injured in Kyiv, and having been rejected twice his request to rejoin the front, he was sent as an internal service officer to Auschwitz, also known as Auschwitz-Birkenau, one of the most infamous death camps constructed by the Nazis.

Concentration camps had existed in Germany since 1933, as detention centers for Jews, political prisoners, and what were perceived as enemies of the Nazi state. Death camps, however, were built for the sole purpose of killing Jews and other people the Nazi regime considered as “undesirables.” That group included artists, educators, homosexuals, communists, Gypsies, and those mentally or physically handicapped who were considered unfit for survival in Nazi Germany.

Auschwitz had started its operations in 1940 and its first commandant was Rudolf Hess, who had previously help run the Sachsenhausen concentration camp in Oranienburg, Germany. When the Soviet army entered Krakow in 1945, the Germans ordered that the camp be abandoned. It was the end of an inconceivable cycle of death. Mounds of corpses, hundreds of thousands of pieces of clothing, and seven tons of human hair littered the camp.

It is estimated that between 1.1 million and 1.5 million people, the vast majority of them Jews, died in that inferno. More people died in that camp than the British and the Americans lost in the course of the war. Physically, Auschwitz began in 1940 and ended in 1945. Morally, however, it did not.

It is in this context that Hanning’s actions took place. “People were shot, gassed, and burned. I could see how corpses were taken back and forth or moved out,” admitted Hanning to the court. While seated in a wheelchair, he said that he regretted being part of a “criminal organization” that had killed so many and caused so much suffering. “I’m ashamed that I knowingly let injustice happen and did nothing to oppose it,” he said, his voice broken by emotion.

I’m ashamed that I knowingly let injustice happen and did nothing to oppose it.
— Reinhold Hanning, former SS guard in Auschwitz

If it weren’t so tragic, his testimony could be moving. In a statement read by his lawyer he said, “I have remained silent for a long time. I have remained silent all my life. I’ve tried to repress this period for my whole life. Auschwitz was a nightmare; I wish I had never been there… I could smell burning bodies; I knew corpses were being burned.”

Auschwitz survivor Leon Schwarzbaum, who had lost 35 members of his family in that camp, gave evidence in the trial against Hanning. He said that he remained haunted by his experiences in the camp and described Hanning as “cruel and sadistic.” Schwarzbaum said, “The older I get, the more time I have to think about what happened. I am nearly 95 years old and I still often have nightmares about this.”

But the most remarkable part of Schwarzbaum’s testimony is when he declared before entering the court, “I’ll look into his eyes and see if he is honest, because the truth is what is most important. I don’t want revenge; I don’t want him tormented in prison. He is just an old man like me.”

I’ll look into his eyes and see if he is honest, because the truth is what is most important.
— Leon Schwarzbaum, former prisoner of Auschwitz

Having lived the loss of three of my wife’s young cousins, who were murdered by the Argentine military during the 1970s (we were never able to learn the exact date), I couldn’t but marvel at his words. That despite all his personal suffering, Schwarzbaum would put truth and justice before his desire for revenge was for me Auschwitz’s greatest lesson.