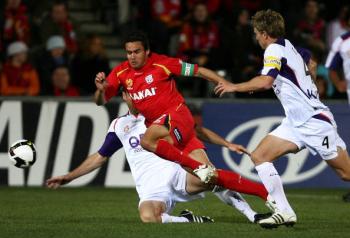 Soccer fans had to wait until Sunday evening for a clear competition leader to emerge when Adelaide United’s 1–0 home victory over Perth Glory in the final match topped the three hard fought draws held earlier.

The Grand Final rematch hosted by Newcastle Jets against the Central Coast Mariners, which kicked off the season on Friday night, only burst into life after the half-time break.

Newcastle created numerous second-half scoring chances on the back of the short passing football that made them Champions of last season only for young Central Coast striker Matt Simon to bob up at the other end in the 87th minute to head home his debut A-League goal just hours after returning from Olyroos duty at the Beijing Olympics.

But Central Coast celebrations were cut short when Newcastle’s leading goal scorer of last season Joel Griffiths blasted a penalty past opposition keeper Danny Vukovic in the final minute of regular time to produce a 1–1 finish.

A vastly under-strength Sydney FC produced a result few had predicted in holding Pre-season Cup victors Melbourne Victory to a 0–0 draw at the Sydney Football Stadium on Saturday night.

Sydney keeper Clint Bolton was the hero for the home fans after blocking multiple Melbourne goal-bound strikes in the first half in particular.

The following day, Pre-season Cup runners-up Wellington Phoenix also showed their home fans plenty of new season resolve in coming back from a goal down to share the points with the Queensland Roar.

Adelaide United captain Travis Dodd led from the front at Hindmarsh Stadium on Sunday with his stunning first half goal the difference in the home side’s 1–0 victory over a determined Perth Glory.

Nearing the half-time break, the Indigenous Socceroo stormed downfield with the ball at his feet to outpace the Glory defence and nail his blistering shot narrowly inside the near post.

In Round 2 matches this weekend, the Perth Glory have the chance to redeem themselves before their home fans when they host the Newcastle Jets on Friday night.