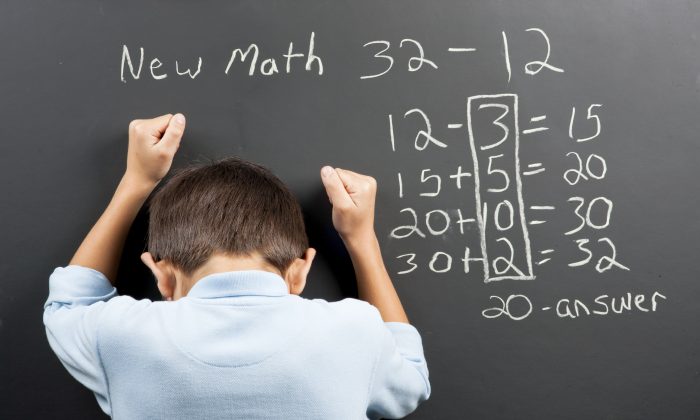 How strongly children identify with math—their math “self-concept”—can predict how high they will score on a standardized test of math achievement, a new study shows.

The study also measured the strength of students’ stereotype that “math is for boys” and found that, for girls, the stronger this subconscious stereotype, the weaker the individual child’s math self-concept.

“Our results show that stereotypes are related to how children think of themselves as math learners, which, in turn, is related to how well they do on an actual math test,” says lead author Dario Cvencek, a research scientist at the University of Washington’s Institute for Learning and Brain Sciences.

This self-concept matters because it is correlated with actual behavior, such as math achievement.
— Andrew Meltzoff

With coauthor Andrew Meltzoff, Cvencek examined math-gender stereotypes, math self-concepts, and math scores in 300 children (an even mix of boys and girls) in grades one, three, and five in Singapore.

The researchers chose Singapore, because it—like other Asian countries including Japan and China—is consistently ranked as one of the top nations in the world for math achievement among girls and boys.

The researchers focused on a high-achieving culture where there aren’t gender differences in math ability, so that they could see which psychological factors have a role in student performance.

“We were fascinated to find that elementary-school children have subconscious thoughts about whether or not they are a math person,” Meltzoff says. “They have an implicit identity of ‘math is for me’ or ‘math is not for me’ at a surprisingly early age. This self-concept matters because it is correlated with actual behavior, such as math achievement.”

At the beginning of the children’s school year, the researchers led each child through an assortment of tasks measuring the students’ beliefs about math-gender stereotypes (“math is for boys”) and math-self concepts (“math is for me”).

A Child Implicit Association Test examined the children’s subconscious beliefs. The IAT probes self-concepts, stereotypes, and other attitudes that people may not know they have. Adult versions of IAT reveal hidden beliefs about gender, race, religion, and other topics.

The researchers also used self-reported tasks to measure the children’s explicit beliefs. These tasks involved the children looking at a series of drawings of boys and girls and then answering questions such as how much the characters in the drawings liked math.

Then, at the end of the school year, the students took a standardized math achievement test administered by their teachers.

Girls and boys performed well on the math test and had similar scores. But when the researchers factored in their math-gender stereotype and math self-concept beliefs, they discovered that the children’s implicit— but not explicit— beliefs affected math scores.

“We’ve found that there are implicit psychological factors, such as students’ beliefs about math, that can weaken students’ identification with math and also impair their math performance,” Cvencek says.

And since the factors are implicit and not detectable by self-report measures, this means they can affect student performance without students’ being aware of them.

Previously, Cvencek and Meltzoff found that as early as second grade children in the US begin to express the cultural stereotype that “math is for boys, not for girls,” which may discourage girls from pursuing math.

Parents’ Math Anxiety Can Rub Off on Kids

The researchers plan to use the findings to design ways to identify implicit math self-concepts as they emerge early in elementary school and create interventions to change beliefs that could be detrimental to math performance.

“We have high hopes for the usefulness of our tests,” Cvencek says. “We think it could be useful for teachers and parents to know whether their young child identifies positively or negatively with math. If we can boost children’s math self-concepts early in development, this may also help boost their actual math achievement and interest in the discipline. We plan to test this.”

Additional coauthor Manu Kapur contributed from the National Institute of Education in Singapore.

The National Science Foundation, the Singaporean Ministry of Education, and the University of Washington funded the research, which appears in the journal Learning and Instruction.